Ramadan in Dubai: A glimpse into one of the city's communal iftars

News
Ramadan
Things to do

Every night over the month of Ramadan, the streets of Old Dubai come alive with this special tradition.

Let’s play a word association game: we say iftar, and you think heaving tables and bottomless platters at a lavish hotel buffet.

For many of us in Dubai, the sunset meal during Ramadan has become synonymous with a dizzying stuff-your-face session – whether we’ve spent the day fasting, or not.

This is a perception Unseen Trails is trying to change. Every Ramadan, the tour company – a joint venture between Frying Pan Adventures and Gulf Photo Plus – organises a five-hour walk through the back alleys of Old Dubai, culminating in a communal iftar on the street. It’s a rare opportunity for outsiders to witness the authentic, humble spirit of the Holy Month. 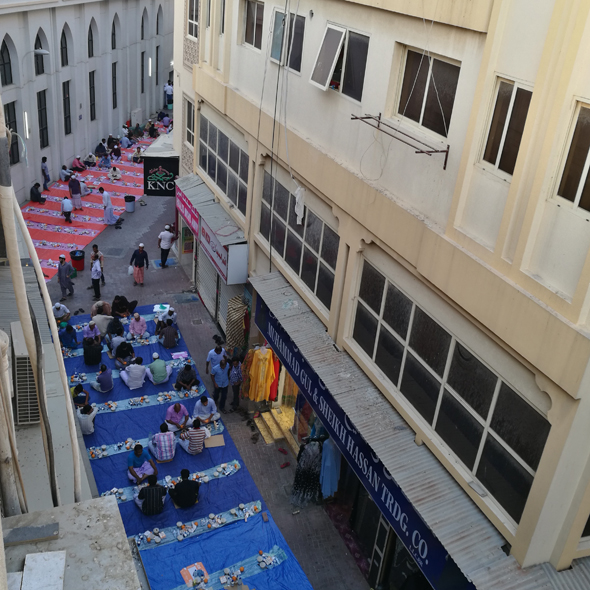 It was a sweltering Saturday evening when our tour group, mostly made up of Dubai residents, met at Al Ras Metro Station. We were warned we wouldn’t be able to drink any water for almost two hours as we walked around in the sticky heat – though this was a drop in the bucket compared to the 14-hour fast most people in the neighbourhood were enduring.

Led by Frying Pan Adventures co-founder Arva Ahmed, we zigzagged our way through the dusty streets of Naif. The usually bustling area was uncharacteristically still and sleepy; the only occasional signs of life came from solemn-faced workers pushing trolleys down lanes, or pairs of hands hanging up washing on the balconies above.

We quickly passed through the Gold Souk, ignoring half-hearted mutters about watches and handbags. Then we rounded a corner and stumbled across a long, narrow tarpaulin, snaking between residential buildings. It had a repeating pattern: Water, milk, date, orange, water, milk, date, orange. Golden samosas and containers of nutritious kanji, a type of porridge, were soon added to the composition. 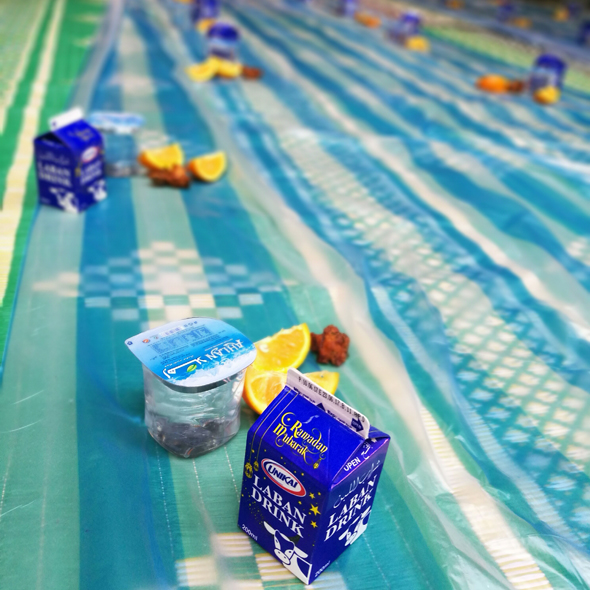 As the sun slid further behind the buildings, more men were starting to gather, placing their sandals neatly beside the tarpaulin and sitting cross-legged before their snacks. Some started peeling their oranges methodically, breaking the fruit into segments ready for eating. The fresh citrus scent permeated the air.

No matter how many times you’ve heard the call to prayer, you’ve never felt it wash over you as when sitting on the pavement, waiting to break the fast. A hush descended over the area as the men took their first gulps of water and bites to eat in so many hours. Even though our fast was measly by comparison, we can’t recall an orange ever tasting so sweet.

The iftar is organised by the Indian Muslim Association, which prepares food for approximately 5000 people at the Ali Rashid Lootah mosque. In the past, Unseen Trails participants didn’t used to join in on iftar, instead standing and watching the ritual from a respectful distance, Arva explained. They were hesitant about taking food away from those who really needed it. To their surprise, however, the organisers protested. They insisted the tour groups have their own spot amongst the local residents. 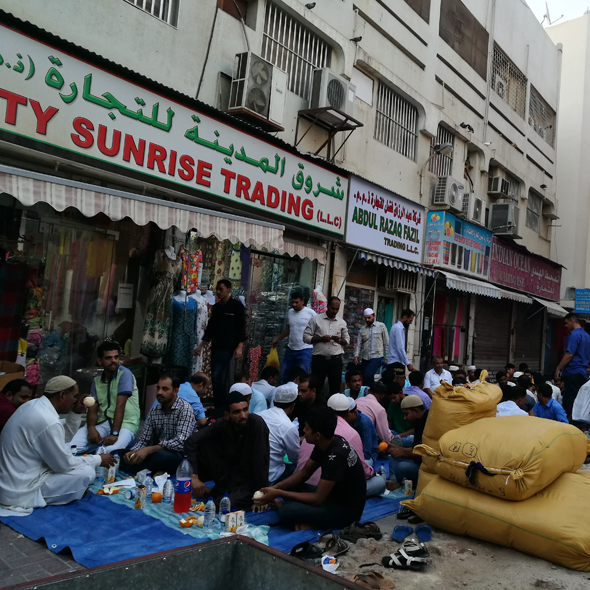 “But by being here, we are also honouring them in ways we can’t fully understand.”

Here’s a video showing how the food is prepared:

Our rainbow group certainly attracted a lot of curiosity from passers-by. Some wanted to make sure we had enough food. Others wanted to take pictures of us on their phones. One man took a group selfie, returned to his tarpaulin, then returned a few minutes later to request another shot from a better angle. 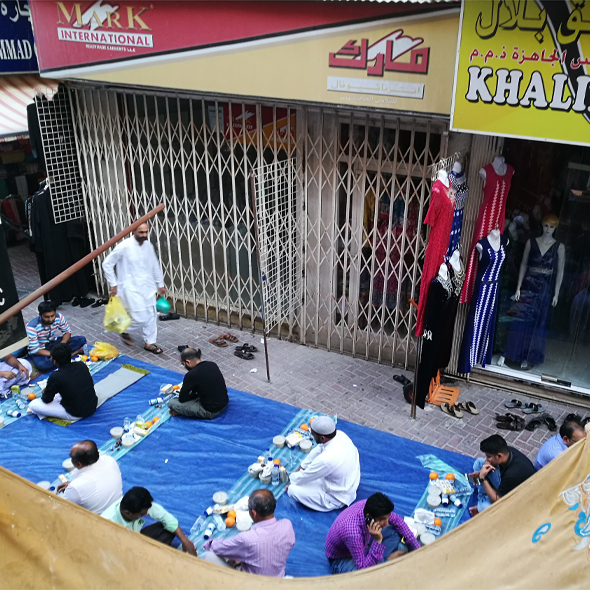 It was all over in half an hour. We helped with the clean up, bundling up the rubbish and placing it in bags, as street cats picked at the scraps. Neon lights of surrounding shops started to flicker on, and the area buzzed with renewed energy – as if the collective blood sugar level had returned to normal. Some men got straight back to work, while others sat around sipping cups of chai, or filling up on fried snacks from hole-in-the-wall eateries that appeared from nowhere.

It couldn’t have been more different to our past five-star, luxury iftar experiences. But it was certainly one we will never forget.

News
Ramadan
Things to do
EDITOR’S PICKS
Ramadan in Dubai: 40 iftars to try
READ MORE
Where can Dubai residents travel? Check out these 14 destinations
READ MORE
Rumours, facts and reveals: New Abu Dhabi bars and restaurants
READ MORE
UAE announces reduced working hours for Ramadan 2021
READ MORE
MOST POPULAR
Get two-for-one massages all summer at this luxe Dubai hotel
Here are some excellent Ramadan markets to check out in Dubai
6 action-packed activities to tackle in the UAE
Pics of the week: Your best photos of the UAE
Abu Dhabi International Book Fair to return in May as a live event
YOU SHOULD CHECK OUT
Our website uses cookies and other similar technologies to improve our site and your online experience. By continuing to use our website you consent to cookies being used. Read our privacy policy here.