It's official: Eid Al Fitr starts in the UAE Sunday

The Abu Dhabi Judicial Department (and its moon sighting committee) has now confirmed that Eid Al Fitr will start Sunday. This is as official a source as it gets.

This means Sunday and Monday are paid days off for private sector workers.

At around 7pm UAE time the Shawwal moon was sighted in Indonesia, with the world’s most populous Muslim majority country declaring Eid a few hours before we did so in the UAE.

Here’s a tweet showing Saudi officials in the process of sighting the moon:

Public sector workers will get an even longer break, and the Federal Authority for Government Human Resources has announced that Eid al-Fitr holiday for federal ministries and authorities in the UAE will begin on Saturday June 24, and work will Wednesday June 28. 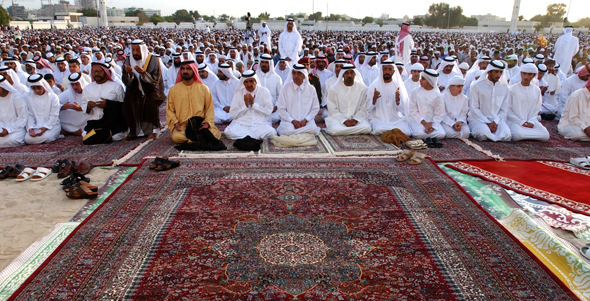 The first day of Eid is marked by pre-dawn and then dawn prayer, during the latter the city’s mosques are full of worshippers.

OTHER DAYS OFF OVER SUMMER

This marks the second day of the annual pilgrimage or haj – the holiday depends on the moon sighting, but if it falls on August 31 as predicted, it will mean yet another long weekend in the UAE. And it will be directly followed by…

This holiday honours Ibrahim’s willingness to sacrifice his son Ismail (which is why goats are symbolically sacrificed over this period). While the date could change due to the moon sighting, the holiday is likely to fall on Friday September 1. It traditionally means two days off, which, when combined with Arafat Day, could mean a four day weekend.

Islamic New Year in 2017 will mark the year 1438 – and, while the date may change, it’s likely to fall on Thursday September 21, making it the second long weekend in September.

News
Travel
Travel Guides
EDITOR’S PICKS
Ramadan in Dubai: 48 iftars to try
READ MORE
Where can Dubai residents travel? Check out these 14 destinations
READ MORE
Rumours, facts and reveals: New Abu Dhabi bars and restaurants
READ MORE
UAE announces reduced working hours for Ramadan 2021
READ MORE
MOST POPULAR
The UK and eight other countries added to Abu Dhabi Green List
Breaking: Flights from India to UAE suspended for 10 days
A sweet new Japanese restaurant has opened in The Greens
Book a Yas Hilton Ramadan stay and play package from Dhs396pp
There's a cool new coffee shop to check out in Dubai
YOU SHOULD CHECK OUT
Our website uses cookies and other similar technologies to improve our site and your online experience. By continuing to use our website you consent to cookies being used. Read our privacy policy here.