Dubai is set to become a destination for 'astronomy tourism'

The Al Thuraya Astronomy Centre will be home to 4.5 billion year-old meteorites and allow visitors to experience what it’s like to live on Mars

Fancy yourself a bit of a stargazer? Well, you’re in luck as Dubai is set to get its first observatory before the year is out.

Located in Mushrif Park, the Al Thuraya Astronomy Centre will open its doors in conjunction with the 46th UAE National Day on 2 December 2017.

In an interview with Gulf News, Hasan Al Hariri, CEO of the Dubai Astronomy Group, said that unlike other museums and observatories, the new centre will have a hands-on approach, encouraging visitors to touch the various exhibits on display including several pieces of meteorites which are 4.5 billion years old.

Shaped to look a bit like a UFO (which we don’t think is by coincidence), the centre is estimated to have cost around Dhs50 million and will be open to visitors 24/7. 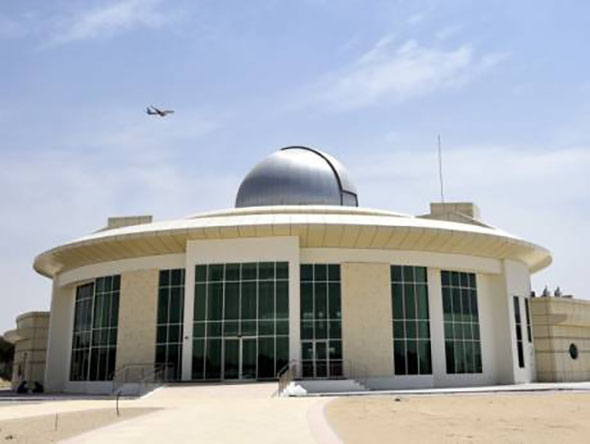 It will also house the country’s largest telescope boasting a lens with a one-metre diameter that, thanks to its size, will help to see far-off stars and galaxies with minimal light pollution. The centre will be able to share the telescope’s findings with NASA as well as collaborate as part of a global network of similarly-sized telescopes.

Smaller telescopes will be available to rent for the general public and can be used within the park or the centre’s terrace.

Aside from the main observatory, the project will also feature a museum, a library, an academy, an observation deck, as well as an astronomy-themed food court and souvenir shop and a Mars habitat where people can experience what life would be like on Earth’s closest neighbouring planet.

“Our aim is to make this centre a place for people to come and socialise and learn about the universe in a friendly and interactive way.” said Al Hariri, who also noted that events such as star gazing parties, zero gravity experiences, astrophotography and astro-sports sessions will be held at the centre.

Ticket prices for the observatory have yet to be finalised, however entry to the other parts of the centre will be free of charge.

Culture
EDITOR’S PICKS
Bla Bla: Dubai's huge new beach club is set to open this Thursday
READ MORE
16 of the best beach bars in Dubai for sundowners
READ MORE
Watch: A look inside Conor McGregor's Dhs20,000 per night Dubai villa
READ MORE
Where to get the Covid-19 vaccine in Dubai, Abu Dhabi and across the UAE
READ MORE
MOST POPULAR
Need a few laughs? These comedians are coming to Dubai in February
Is David Guetta going to perform in Dubai? It looks like it...
Amazonico Dubai launches new brunch and rooftop after-party
A stunning bright pink lake has been discovered in the UAE
Review: Goldfish Sushi & Yakitori, Dubai
YOU SHOULD CHECK OUT
Our website uses cookies and other similar technologies to improve our site and your online experience. By continuing to use our website you consent to cookies being used. Read our privacy policy here.