Is it the Five Palm Jumeirah or the Viceroy? The saga continues...

First it was a Viceroy, then it became the FIVE, and then we were told it was the Viceroy again. Today’s update? FIVE says the Palm Jumeirah hotel is still a FIVE hotel despite reports that the DIFC courts had insisted that the Viceroy had the exclusive rights to manage the hotel (yep, we’re confused too).

The glistening new Viceroy Palm Jumeirah opened in April and the hotel’s unique architecture had people talking, as did its sleek interiors and ocean-facing pool. But in June it was announced that the property’s owners, the FIVE Palm Jumeirah Dubai, were taking over the management of the hotel, effectively wiping the Viceroy brand from the property.

But then, less then a week later, the UAE’s official news agency, WAM, announced that DIFC’s courts had stepped in to disallow FIVE from taking over management of the Viceroy.

“The Court’s order requires, among other things, Viceroy’s name, signage and branding to be reinstated at the hotel. Our priority remains to work with our outstanding hotel colleagues to ensure continuity of service and consistent delivery of a guest experience in keeping with the Viceroy ideology.”

Well, today FIVE Holdings, who initially purported to take over the hotel, have released a statement saying that they still manage the hotel, despite the story that DIFC courts had insisted they cease operations.

The hotel’s website, however, is still branded as Viceroy.

“FIVE Hotel FZCO continues to manage the FIVE Palm Jumeirah Dubai hotel and residences, which it has done since 19 June 2017,” said Kabir Mulchandani, Chairman and CEO of FIVE Holdings.

“We will take all steps to ensure the interests of the hotel’s employees, guests, investors and stakeholders remain protected and are never compromised. This to us is our single most important guiding principle.

“Pursuant to the Decree and the reference to the Dubai Joint Judicial Committee, all proceedings between ASSAS OpCo Limited and VIH Dubai Palm Jumeirah Ltd (Cayman Islands), the property’s former operator, have been suspended by force of law.”

The company that has taken over the operation of the hotel – FIVE – were originally SKAI holdings: they are actually the company that worked on the construction of the five-star hotel and they own the land the hotel was built on (one company owning a hotel and another managing it is quite standard practice).

While, yes, it is effectively just a management change back to the property’s owner, both the switch and timing are surprising: Viceroy is an established name in the luxury space with more than 20 locations globally. Plus, two-and-a-half months must rank as the shortest five-star branded tenure in Dubai. 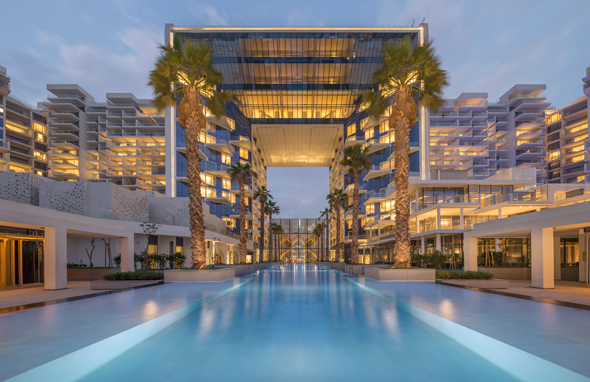 (Just think of the cost of even changing the hotel stationery…)

The Viceroy website is still live, however the Instagram location of Viceroy has been renamed to FIVE Palm Jumeirah.

The FIVE Palm Jumeirah Dubai will apparently be officially launched during an event in October, and according to the hotel’s new operators the new-but-not-new hotel is now in a “soft opening phase”.

FIVE Hotels & Resorts used to go by the name SKAI Holdings – and they plan to have four hotels in Dubai by 2020. One of the FIVE hotels will be in Jumeirah Village Circle, and construction on that has begun.

So does this mean all of the restaurants and offerings in the new Viceroy will change? While we don’t know for sure, it’s very likely that FIVE will shake things up (especially if they’re planning for a formal relaunch in October).

Interestingly, the new operators FIVE released this video a few weeks ago that show how they (when they were called SKAI) had a lot to do with the hotel’s inception (and how they own the land, which Viceroy then presumably rented from them):

Although we imagine they won’t change the interior details in the hotel, which are really rather stunning:

Staycations
Travel
EDITOR’S PICKS
UAE holiday dates announced for National Day
READ MORE
Emirates Dubai 7s is back: Here's why we're excited...
READ MORE
Tennis ace Andy Murray to play at Mubadala World Tennis Championship
READ MORE
UAE 50: Where to watch National Day fireworks in Dubai
READ MORE
MOST POPULAR
UAE confirms its first case of the Omicron variant
Alhosn Green Pass to only be valid for 14 days after negative PCR
20 of the best things to do in Abu Dhabi this long weekend: Part 2
First look: London-loved restaurant The Cinnamon Club opens in Dubai
Check out this amazing display at the world's highest outdoor infinity pool
YOU SHOULD CHECK OUT
Our website uses cookies and other similar technologies to improve our site and your online experience. By continuing to use our website you consent to cookies being used. Read our privacy policy here.