Moreish mall food: where to eat if you're out shopping in Abu Dhabi

There’s more to food in the capital’s malls than McDonald’s and KFC. Inside Abu Dhabi’s shopping centres you’ll find fine-dining outlets, What’s On Award winners and restaurants serving dishes created by celebrity chefs. Here’s our pick of the best

Outlets that have our seal of approval 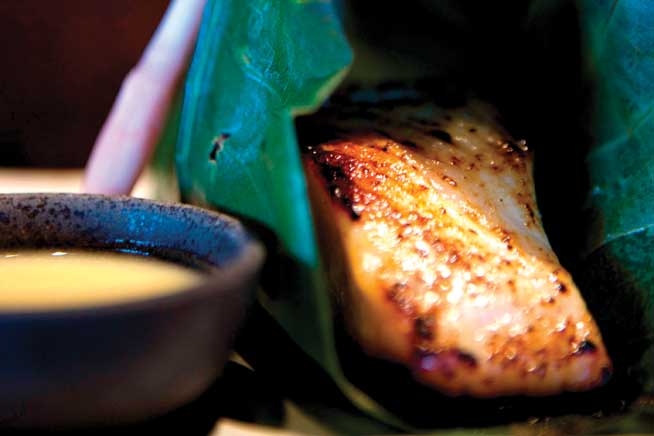 It’s been crowned Restaurant Of The Year three times in a row by the What’s On team and incredibly it’s attached to a mall – albeit the rather high-end Galleria on Al Maryah Island. With mains such as the classic miso black cod and roasted Boston lobster with shiso-ponzu butter, this is as far away from a food court burger as you can get.
The Galleria, Al Maryah Island, Abu Dhabi, Sat to Thur, noon to 3.30pm, Sat to Wed 7pm to midnight, Thur and Fri 7pm to 1am, Fri 12.30pm to 4pm (brunch). Tel: (02) 4015900. Taxi: The Galleria, Al Maryah Island. zumarestaurant.com 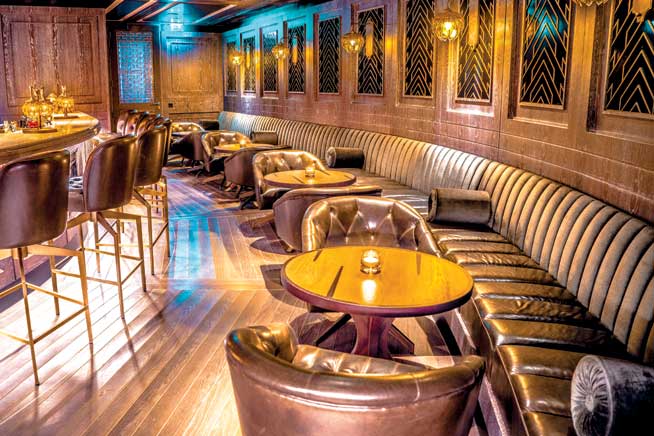 Dai Pai Dong is technically part of the Rosewood hotel, but is actually situated inside The Galleria. Taking its influences from Hong Kong’s street food scene, it walked away with our Best Chinese gong at the 2016 What’s On Awards. It’s Saturday brunch is always packed and we recommend you check out the moreish dim sum.
Rosewood, Al Maryah Island, Abu Dhabi, daily noon to 3pm, Sat to Wed 6pm to 11pm, Thur and Fri 6pm to midnight. Tel: (02) 8135552. Taxi: Rosewood. rosewoodhotels.com

The pan-Latino dishes at Bu! impressed team What’s On so much in 2016 we named it Newcomer Of The Year. Check out its vast selection of ceviches but leave room for hearty mains such as the black Angus rib eye.
WTC Mall, Airport Road, Abu Dhabi, Sat to Wed noon to 2am, Thur and Fri noon to 3am. Tel: (02) 6668066. Taxi: WTC. butrinity.com 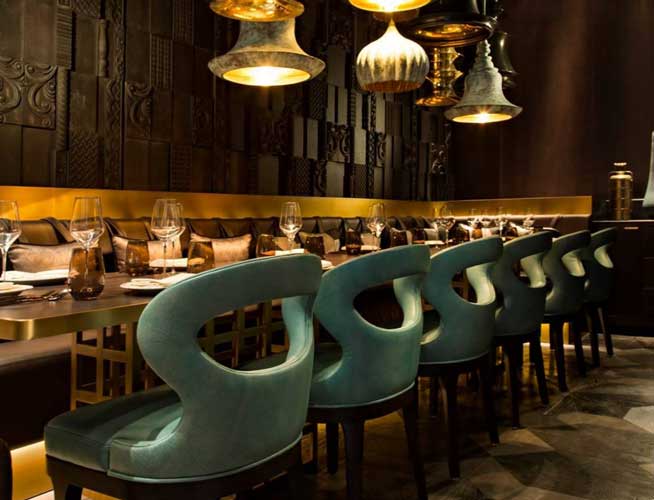 We named Aditya Kumar Jha our Chef Of The Year in 2016 at the What’s On Awards and with good reason – his menu of street food-inspired Indian dishes is unique and often surprising (on it you’ll find lamb gyoza plus roasted duck). Its location in a mall hasn’t stopped Tamba becoming one of the capital’s most popular venues.
WTC Mall, Al Markaziyah, Abu Dhabi, Sun to Wed noon until 1am, Thur to Sat noon until 2am. Tel: (02) 6728888. Taxi: WTC Mall. tambarestaurant.com

If you’re after Middle Eastern dishes that won’t break the bank, head to Zaytinya, winner of the Favourite Middle Eastern Restaurant category two years in a row at our annual awards. The mixed grills here are of a high standard and it’s family-friendly.
Al Seef Village Mall, Abu Dhabi, daily 11.30am to 11.30pm. Tel: (02) 4474489. Taxi: Al Seef Village Mall, near Khalifa Park. zaytinya.ae 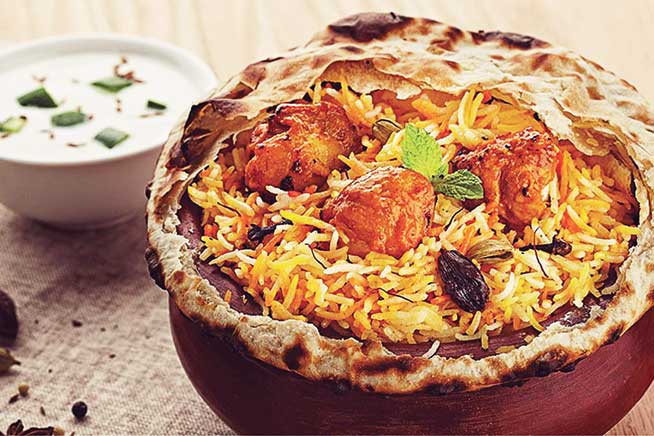 Smoking Doll won the Favourite Thai Restaurant award in 2016 but confusingly, it’s a Thai restaurant that also knocks out Japanese dishes, including sushi. Its curries are what really stand out though – try the panang.
Boutik Mall, Al Reem Island, Abu Dhabi, daily 11am to 11pm. Tel: (600) 560603. Taxi: Boutik Mall

Menus and décor that are a little out of the ordinary

The acai berry is one of those superfoods that experts reckon is full of antioxidants, can aid with recovery after exercise and can even help you lose weight. The small red and purple fruits look like a cross between a grape and blueberry and they’re served in milkshakes and smoothies at Express, but What’s On is a fan of their Special Meal menu – the berry is served like a sorbet in a big plastic cup with a variety of ingredients. We recommend Coconut Dreams – it comes with acai, condensed milk, milk powder, pineapple, coconut and mixed nuts.
Yas Mall, Yas Island, Abu Dhabi, Sat to Wed 10am to 11pm, Thur and Fri 10am to midnight. Tel: (02) 6423855. Taxi: Yas Mall. yasmall.ae 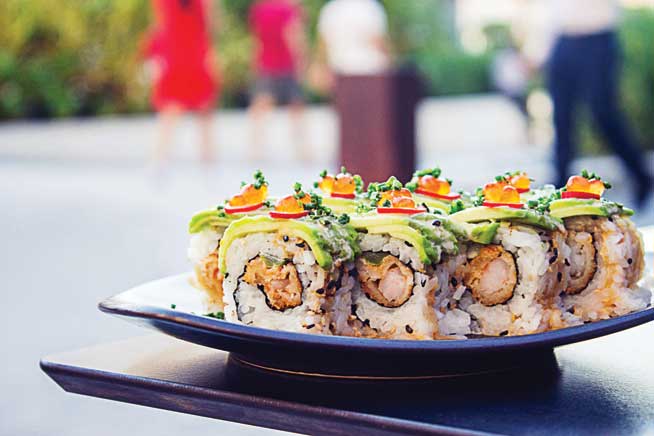 The Galleria’s classy Japanese restaurant adds a European twist to some dishes (thanks to some input from acclaimed French chef Joel Robuchon), the menu is huge, offering everything from ceviches to soups to maki rolls, and equally creative, and the sushi is fresh and colourful.
The Galleria, Abu Dhabi Global Market Square, Al Maryah Island, Sat to Wed 11am to 11pm, Thur and Fri 11am to midnight. Tel: (04) 4495702. Taxi: The Galleria, Al Maryah Island. sushiart.ae 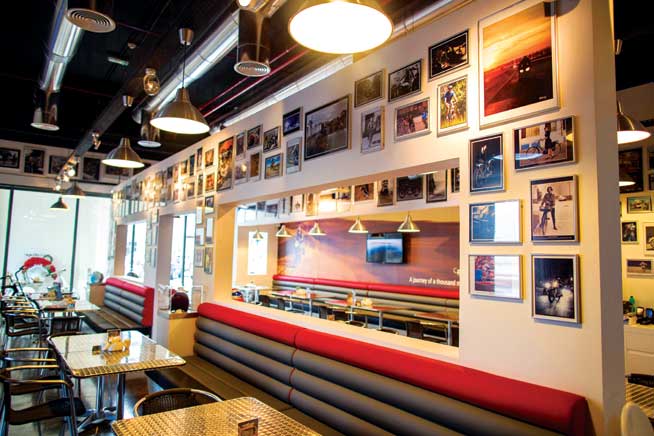 The décor here is worth a visit alone – the walls are lined with photos of people on motorbikes and bicycles (including celebrities) – and the menu is strong, particularly when it comes to breakfast options (pepperoni omelettes, anyone?). Service has been a little erratic on some of our visits but that’s a minor complaint – this is one of the city’s most unique mall offerings. It is a popular weekend haunt for expat and Emirati families.
Al Seef Village Mall, Abu Dhabi, Sun to Thur 7am to midnight, Fri and Sat 8am to midnight. Tel: (02) 4443942. Taxi: Al Seef Village Mall, near Khalifa Park. bikerscafe.com

New kids on the block

Recent additions to the city’s a scene 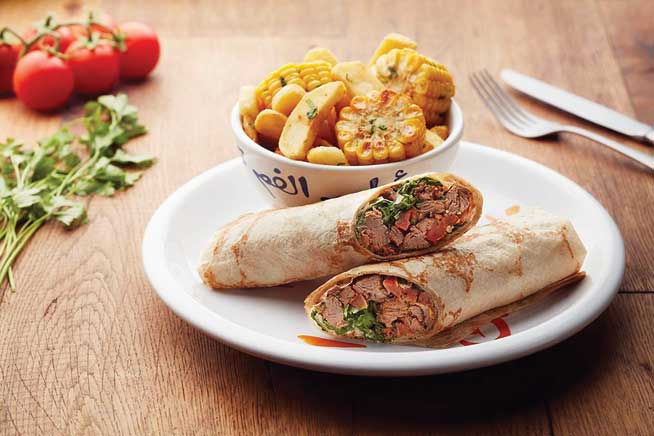 A new outlet that only opened in the capital last month, Azkadenya is a Middle Eastern restaurant that places a focus on fusion dishes – they sell a falafel pizza, for example. Its sister branch in Mall Of The Emirates is popular with our pals at What’s On Dubai.
Marina Mall, Breakwater, Abu Dhabi, 10am to midnight. Tel: (02) 6212788. Taxi: Marina Mall. facebook.com/AzkadenyaUAE

Another recent addition to the city, Genghis Grill opened back at the end of April and the concept is a simple one – you build your own meal by choosing from a section of ingredients (proteins, spices, veg and sauces). You can make soups and noodle dishes, but if like team What’s On your knowledge in the kitchen is a tad limited, there is also an extensive a la carte menu of Asian dishes available.
Al Wahda Mall, Al Wahda, Abu Dhabi, daily 11am to 10.45pm. Tel: (02) 5824449. Taxi: Al Wahda Mall. genghisgrill.com 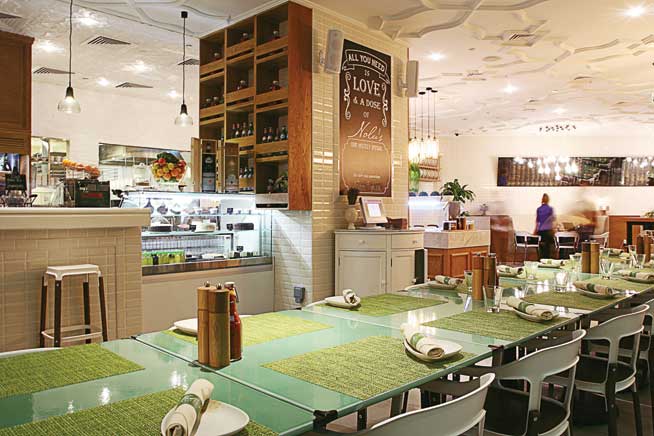 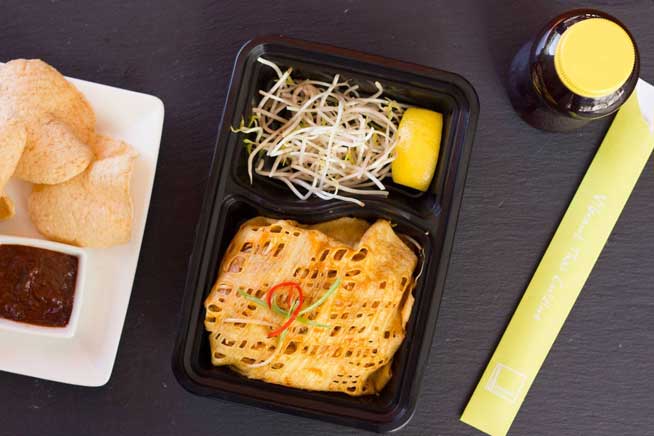 Visit a restaurant owned by the rich and famous 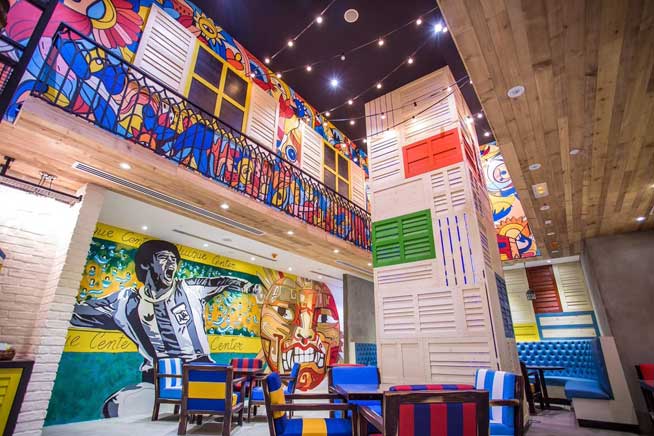 Diego is part owned by ex-footballer Diego Maradona and is a real curiosity – while the colourful décor will transport you to a backstreet in Buenos Aires (it feels like a sports bar, complete with TVs showing Maradona scoring goals throughout his career), the food is fine-dining in look and taste. You’ll find everything from soups to ceviche and huge steaks here.
Nation Galleria, Al Khubeirah, Abu Dhabi, Sun to Wed 9.30am to 11pm, Thur to Sat 9.30am to midnight. Tel: (02) 6772344. Taxi: Nation Galleria. allied-brothers.com

An Indian outlet in Yas Mall, Asha’s is owned by legendary Bollywood playback singer Asha Bhosle. The star has recorded more than 12,000 songs for 850 films during her career, and the 83-year-old was given a Lifetime Achievement Award at the Dubai International Film Festival back in 2014. Try the paneer kebabs.
Yas Mall, Yas Island, Sat to Wed noon to 11pm, Thur and Fri noon to midnight. Tel: (02) 4926680. Taxi: Yas Mall. ashasrestaurants.com 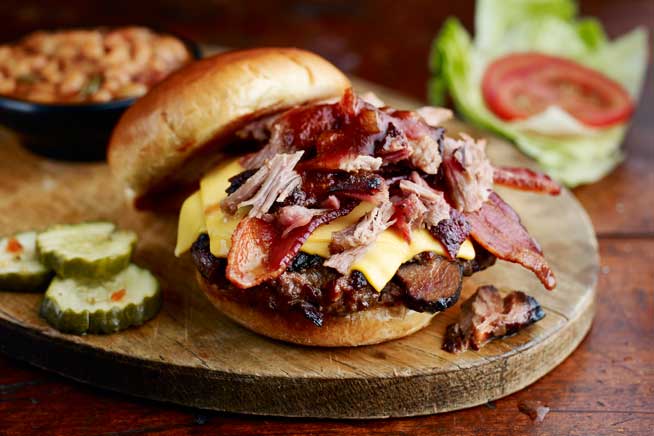 You’d be forgiven for thinking Dave’s is just another boring old chain from the US, but the ribs and barbecued chicken in particular are of a high standard. What’s more, Famous Dave is also a bit of a personality – he’s been declared bankrupt twice, but also has friends in high places. Oprah Winfrey once gave big Dave an Angel Network Award for his work with at-risk Native American kids. He was also a torchbearer at the 2002 Winter Olympic Games in Utah.
Famous Dave’s, Al Zahiyah, Abu Dhabi, Sat to Wed 11am to 11pm, Thur and Fri 11am to midnight. Tel: (02) 6587863. Taxi: Abu Dhabi Mall. famousdaves.ae

19. The Yellow Chilli By Sanjeev Kapoor 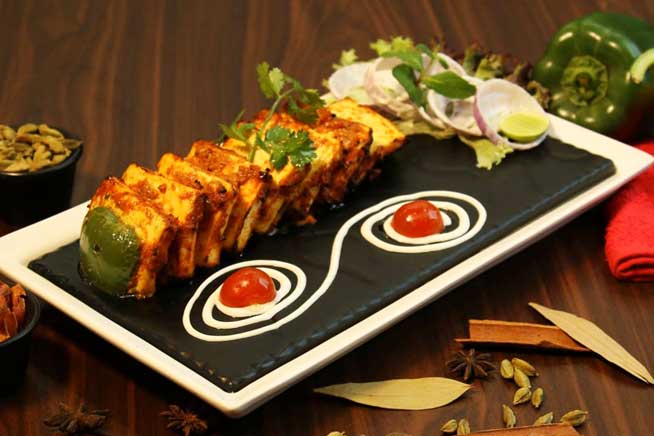 The celebrity chef from India recently opened his second outlet in Abu Dhabi and you’ll find many of his signature dishes on the menu, including lalla mussa dal (black lentils) and sham savera (spinach koftas filled with creamy cottage cheese in tomato butter gravy).
Dalma Mall, Mussafah, Abu Dhabi, Sun to Thur 11am to 11pm, Fri and Sat 11am to midnight. Tel: (02) 6221115. Taxi: Dalma Mall. facebook.com/theyellowchilliuae

Sanjeev Kapoor is no stranger to the UAE – as well as Yellow Chilli he has a restaurant in Dubai, plus a second, Signature, in the capital. Kapoor is a big deal in India and his TV show Khana Khazana has been broadcast in more than 120 countries to an estimated audience of 500 million. Signature does the classics well, such as butter chicken and tikka makhani.
Nation Galleria, Al Ras Al Akhdar, Abu Dhabi, daily noon to 11.30pm. Tel: (02) 6664343. Taxi: Nation Galleria. sanjeevkapoor.com

The Abu Dhabi outlet of this Turkish steakhouse at The Galleria is as much about the food as it is about trying to get a glimpse or tableside carving (and obligatory salt sprinkling) from Instagram sensation Salt Bae, who incredibly now has 7.5 million followers on the social media platform.
The Galleria, Abu Dhabi Global Market Square, Abu Dhabi, daily noon to midnight. Tel: (02) 6799949. Taxi: Galleria, Al Maryah Island. nusr-et.com.tr

Posh grub a million miles away from a Big Mac

French and European dishes are served here and the food is generally of a high standard, especially when it comes to classic dishes such as beef bourguignon and steak tartare. It’s an upscale venue and the prices reflect this – mains start at around Dhs160, rising to Dhs320,
The Galleria, Al Maryah Island, Abu Dhabi, Sat to Wed noon to 1am, Thur and Fri noon to 2am. Tel: (02) 6262131. Taxi: The Galleria, Al Maryah Island. bentleybistro.com 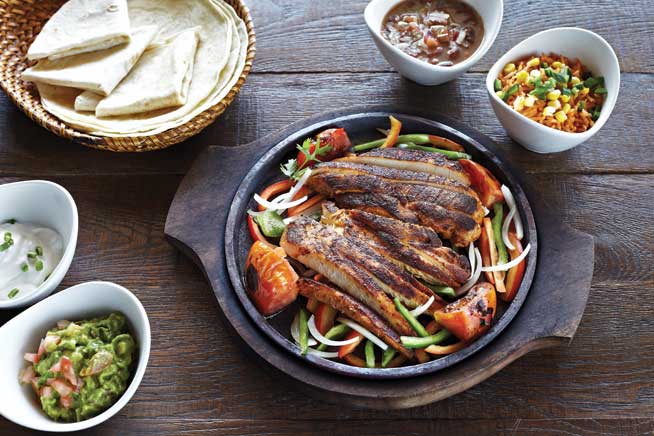 An upmarket Mexican, Loca’s urban décor of grey walls with exposed brick and pipes is married with a huge menu of classic South American dishes. It has a guacamole section (try the crab) and all the usual suspects such as chimichangas and fajitas.
The Galleria, Al Maryah Island, Abu Dhabi, daily noon to 2am. Tel: (02) 5823639. Taxi: The Galleria. locauae.com 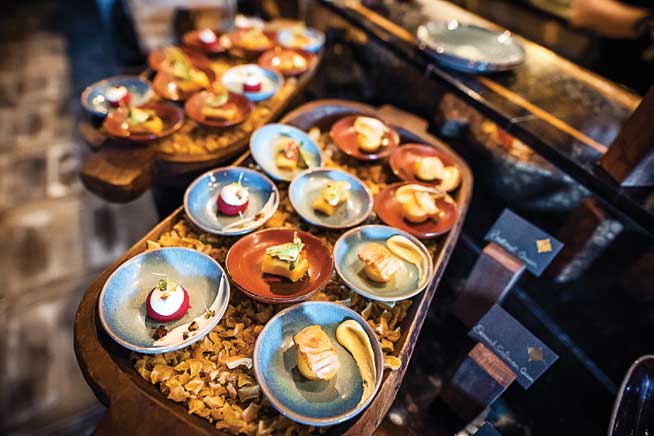 South American flavours from Peru reign at this award-winning chain (the Abu Dhabi branch only opened a couple of months ago). The ceviches here are out of this world and the mains, such as the spicy beef fillet, are also of a high quality. Slick service finishes off a high-end package.
The Galleria, Al Maryah Island, Abu Dhabi, Mon to Sat 12.30pm to 11pm. Tel: (04) 3169600. Taxi: The Galleria. coyarestaurant.com

Eat & Drink
News
Restaurants
EDITOR’S PICKS
UAE holiday dates announced for Eid Al Adha
READ MORE
Emirates extends suspension of flights from India to UAE again
READ MORE
Coming soon: Everything we know about Ain Dubai so far
READ MORE
Khorfakkan set to open new tourist attraction 580 metres above sea level
READ MORE
MOST POPULAR
Enjoy pocket-friendly meals at award-winning restaurants during Summer Restaurant Week
Festival Plaza, Jebel Ali launches series of educational parenting events
First Look: A glow-in-the-dark padel centre lands in Dubai
What happened when the What's On Lock In hit Bab Al Qasr
These Dubai Metro stations have had a name change
YOU SHOULD CHECK OUT
Our website uses cookies and other similar technologies to improve our site and your online experience. By continuing to use our website you consent to cookies being used. Read our privacy policy here.