Celebrate India's independence day in style with this Dhs147,000 cake

Remember last month when we told you about that bonkers Game of Thrones cake that cost Dhs100,000?

Well, it looks like the Dubai bakery that concocted it, Broadway Bakers, has outdone themselves with another ambitious project.

Their latest marzipan-covered masterpiece, commissioned by a private client in celebration of India’s 71st independence day next week, depicts a scene from the 2016 Bollywood film Dangal of popular actor Aamir Khan watching over his two on-screen daughters as they train for the Olympics. 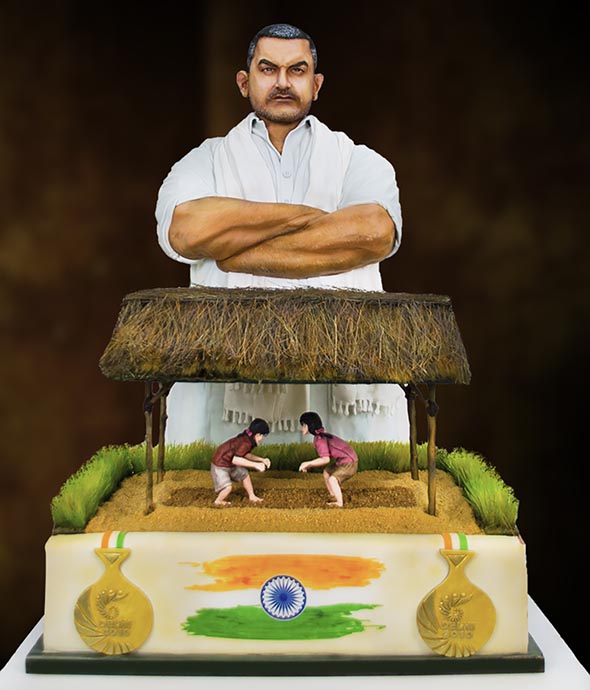 So, what exactly makes it so expensive? It seems that the medals at the front of the cake (replicas of the medal won by freestyle wrestler Geeta Phogat at the 2010 Commonwealth Games) are each coated in 75 grams of edible gold.

Standing at over 4ft tall and weighing 54kg, it is also made from a combination of sugar fondant, chocolate sponge, ganache, Belgian chocolate and demerara sugar. Oh, and it can feed upwards of 240 people.

As with their previous effort, the bakery has released an epic video showing the cake being painstakingly put together:

The cake is 100 per cent edible – right down to the wooden hut, grass and Aamir Khan himself – and took Broadway Bakery’s team three and half weeks and 1,200 man hours to complete.

As with most things in Dubai, it’s being dubbed as “the world’s most expensive” cake, and while this list would beg to differ, there’s no denying that it’s still an incredibly impressive feat.

Eat & Drink
EDITOR’S PICKS
Ain Dubai will open with fireworks, live music and a drone show
READ MORE
Incredible Aura SkyPool to open in Palm Tower this November
READ MORE
Brit Grand Slam hero Emma Raducanu confirmed for Mubadala Tennis
READ MORE
What’s On Nightlife Awards 2021: Here are the nominees...
READ MORE
MOST POPULAR
UAE Famous: In talks with Ramie Murray, the laidback oysterman
Culture guide: Art exhibitions, performances and more to check out from Oct 21 to 23
12 brilliant things to do in Dubai for the long weekend: Oct 21 to 23
Download the first ever Lonely Planet culinary guide to Abu Dhabi, free
The Cheeky Camel is JLT's newest neighbourhood restaurant
YOU SHOULD CHECK OUT
Our website uses cookies and other similar technologies to improve our site and your online experience. By continuing to use our website you consent to cookies being used. Read our privacy policy here.