Not only do they make our city look seedy, they’re also bad for the environment…

Earlier this year, we reported that signs had been erected in Barsha Heights in a bid to prevent cars from being plastered with the notorious “massage cards”.

Now, it seems Dubai Municipality has been forced to take more drastic measures, with plans to slap people caught distributing the cards with a hefty fine and deportation.

ALSO READ:
7 things you might not realise can get you into trouble in the UAE
Man gets Dhs500,000 fine, jail time & deportation over text messages

According to The National, Dubai Municipality officials have been in talks with other authorities about introducing tougher penalties for those caught putting illegal adverts on the doors of apartments and villas.

They have proposed to increase the existing fine from Dhs500 to Dhs10,000, as well as immediate deportation for distributers of the cards. 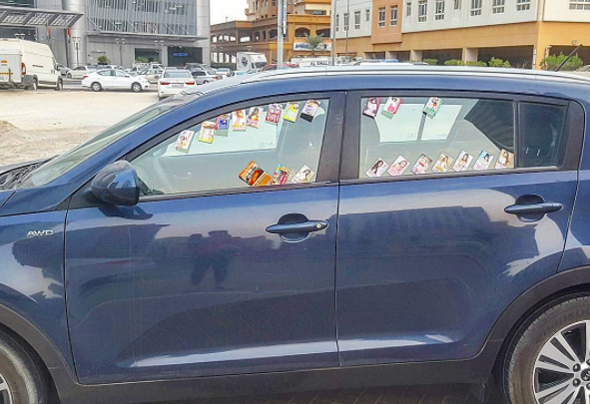 “It has been noticed that many illegal adverts and posters have spread in all parts of the city, including in front of private homes,” Abdul Saifaie, director of the municipality’s waste management department, told The National.

“Such practices negatively affect and distort the appearance of the city.”

Massage cards are primarily used to promote unlicensed massage parlours in the city. The images used on the cards are often very risque.

However, massage cards wouldn’t be the only adverts targeted under the new penalties, which would also ban flyers for businesses such as cleaning services.

The report said a week-long campaign conducted by the waste management department and Dubai Police resulted in the collection of more than one million adverts and posters.