This picture sums up one of the reasons Dubai is great

We love many things about Dubai, and this picture that went viral two years ago highlights one of the main reasons this city is a great place.

We’ve resurfaced it this week in honour of both Pakistan and India’s Independence Days (it was 70 years ago, in 1947, that the two independent nations were born).

The photo shows two men, one from India and one from Pakistan standing side-by-side, it illustrates how when you live in a city in which you’re surrounded by people from different places, you tend to focus on your similarities and common bonds. On your human-ness rather than any ideology.

*ALSO: Why I take serious issue with the latest Dubai-bashing article*

“This is my best friend,” the colleagues say in their respective notes… 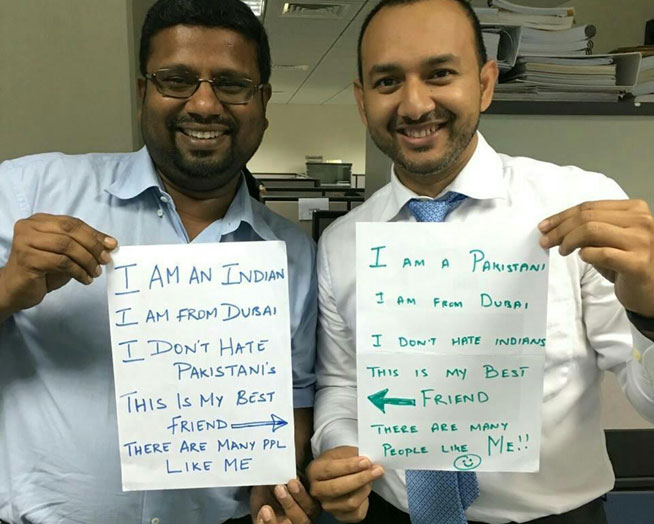 The simple photo had 149 comments and 550 points on Reddit India and had been upvoted 88 per cent of the time.

India and Pakistan have a long history of conflict – with wars in 1947, 1965, 1971, 1999, and standoffs as recently as 2008. The ill feelings due to these often-devastating political conflicts have seeped into many parts of society in Pakistan and India.

But, as one user on Reddit India explained, those sentiments aren’t as strong for Indian and Pakistani expats: “This is hard for people to comprehend in India (where you don’t usually come across Pakistanis), but for Indians and Pakistanis living abroad, especially 2nd and 3rd generation, the identity no longer is Indian or Pakistani, people start identifying as “Desis”. You go to school with these people, you hang out with these people they are your friends growing up. The way in which things function, you would think partition never happened.”

The Dubai photo was part of a new social media campaign called #ProfileForPeace, which was started by a Facebook post from Indian writer Ram Subramanian in 2015 and aims to tell politicians that hate-mongering won’t be tolerated. In the picture he holds a piece of paper in front of his face that says:

‘I AM AN INDIAN
I AM FROM MUMBAI
I DON’T HATE PAKISTAN
I AM NOT ALONE
THERE ARE MANY PEOPLE LIKE ME!’

This is the idea. Do join in if you believe in peace being the way forward. write this message on a post it note, take a…