What exactly is ‘plant-forward’ food, and can this Jumeirah restaurant do it well?

It’s official: The vegetarians are winning. Not only are they healthier than most of us, they’re saving the planet, one kale bushel at a time.

But even as a plant-based diet becomes in vogue, there will always be carnivores who want – and need – meat (or chicken, preferably fried, thanks for asking) to feel whole. 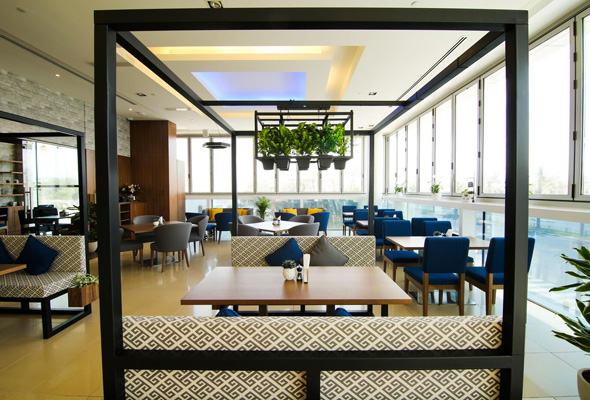 Luckily, new restaurant Sesame in Sunset Mall has found a happy medium. “The bottom line is that we want to share nourishing food,” say co-founders Neha Jamani and Irina Sharma. “Some foods are proven to have therapeutic applications for illness prevention, recovery and optimal health, and that’s what we want to serve at Sesame.”

The lemongrass coconut juice (Dhs30), a lively mocktail, tastes like pure summer, with a spicy kick of ginger. In an adaptation of French terrine, Chef Gohei Kishi (who was previously group executive chef for trendy spot Ramusake) blends mushrooms, walnuts and lentils to make a delicious pate (Dhs32).

Pity the vegetarian diner, because one of the best offerings could be the pomegranate lamb meatballs (Dhs48). Golf ball-size spheres arrive hot and sprinkled with pistachio, served on a bed of crushed cauliflower.

But it wouldn’t be a real nourishing meal without trying their healthy bowl. Named the Sesame Bowl (Dhs58), it’s a large portion of quinoa, kale, sweet potato, avo, pickled turnip and a soft-boiled egg drizzled in a miso ginger dressing. Now, we’re not ones to typically wax lyrical about a superfood bowl, but Sesame’s is one to sing about. The kale is perfectly lax, the sweet potato cooked so well it’s just become soft, the egg is served with a hint of runniness, and that miso makes everything buzz with a tart tinge. A perfect lunch order, indeed. 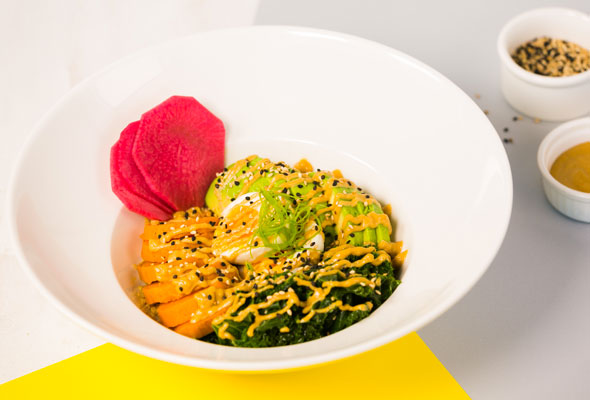 Some of the food is a little bit weird. Falafel waffles (Dhs60) with homemade harissa mayo and a poached egg is a bit too dry and oddly unfun. But the origami fish (Dhs95) served in a Japanese-style paper box is a dainty dish containing hunks of seabass, baby mushrooms and cherry tomatoes lying in a shallow mineral broth.

Just as lovely is the vegan salted chocolate pot (Dhs38), a creamy jar of cashew, coconut and cocoa topped with sea salt.

A thoroughly enjoyable and well-balanced meal that is not only tasty but good for us. That’s reason enough to return.