Forget security: Walk through a virtual aquarium at Dubai Airport

Yes, it will come complete with virtual fish…

You might remember earlier this year, we reported that traditional passport checks at Dubai International Airport were set to be replaced by face scans.

Instead of waiting in line at passport control, passengers would walk through a biometric tunnel that would take a 3D scan of their face. The scan would then be checked against a digital passport, using facial recognition software.

It all sounded pretty futuristic, for sure. But we had no idea the tunnel would be this cool.

#Smart_Tunnel
A unique innovative project that aims to enhance travel procedures and identify the traveler through biometrics. #GITEX2017 pic.twitter.com/VVM6PvoCVJ

As The National reports, the tunnel will take the form of a virtual aquarium, displaying high-quality images of marine life.

Those virtual fish will serve an important purpose – encouraging people to look up, so their faces can be scanned by one of 80 hidden cameras.

ALSO READ:
Your smartphone is now your passport at Dubai Airport
Here’s what your bags should look like if you’re travelling through DXB

When the passenger reaches the end of the tunnel, they will either receive a green message that says “have a nice trip”, or if more information is required, a red sign will appear, alerting airport security staff.

The tunnel will also be able to display advertisements, or can be changed to simulate other environments, like the desert.

Here’s a photo of HH Sheikh Hamdan, Crown Prince of Dubai, walking through: 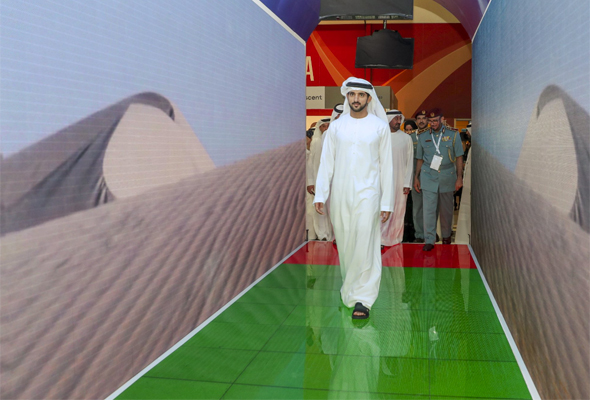 According to The National, the first virtual tunnel will be installed in Terminal 3 (the Emirates terminal), by the end of next summer.

The tunnels will then be rolled out across all other terminals by 2020. Leading up to their installation, travellers will be able to register their face scans at kiosks at the airport, as well as malls and hotels across the city.

The virtual tunnels are one of several technological innovations Dubai Airport has introduced in recent times. In June, the airport announced that UAE residents can now use their smartphones to get through the e-gates, through the UAE Wallet app.