Have you been wondering about what’s happening with the Dubai Frame? Well, after initially being scheduled for opening by the end of the year, a Dubai Municipality official has now confirmed that the Dubai Frame will open in January 2018.

Speaking to Khaleej Times, Khalid Al Suwaidi, Director of Leisure Facilities at Dubai Municipality explained that “since Dubai Safari is opening next month [December], we will inaugurate Dubai Frame in January to avoid opening two major landmarks at the same time”.

Back in March work had begun on the giant structure’s gold stainless steel cladding, which can already be seen on the frame’s glass bridge.

Here’s a snap that shows off the frame’s shiny new look:

See those golden rings on the side of the bridge? They were inspired by the Expo 2020 logo (which represents the theme, ‘connecting minds, creating the future’).

Launched in 2013, the Zabeel Park attraction – designed to look like a huge window frame – was originally slated to open in 2015.

In October last year, it was announced that it was 80 per cent finished.

Here’s what it should look like when it’s all finished: 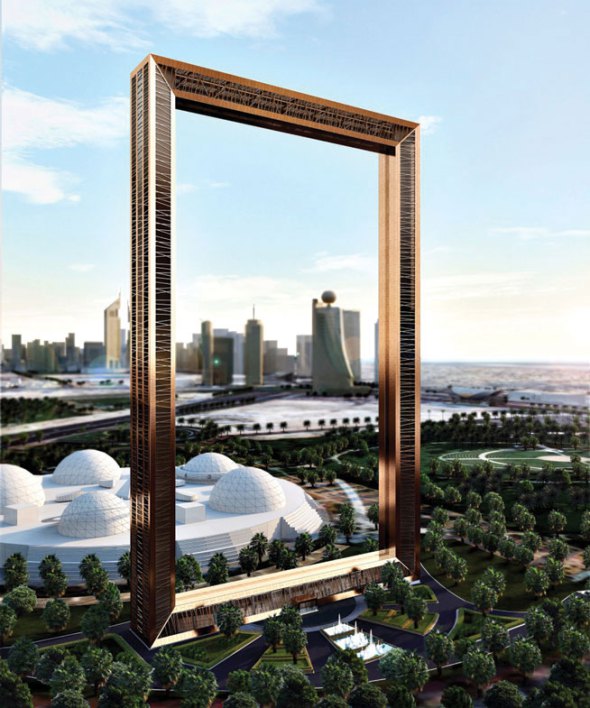 ◆ The two towers are connected by a 100-square-metre bridge, which has a 25-square-metre glass panel in the middle.

◆ It was designed by award-winning architect Fernando Donis, who also designed Dubai’s Porsche Design Towers, and the Dubai Renaissance Tower.

◆ There will be a museum on the ground floor that will showcase Dubai’s transformation from fishing village to metropolis.

◆ It is predicted the frame will become a major tourist destination in the city, like the Burj Khalifa and the Burj Al Arab.

◆ The project is worth Dhs160 million.

News
EDITOR’S PICKS
So, when is the next UAE public holiday in 2021?
READ MORE
All of the lavish new hotels set to open in Dubai in 2021
READ MORE
16 of the best pool passes in Dubai that are fully redeemable
READ MORE
All of the restaurants at West Beach, Palm Jumeirah
READ MORE
MOST POPULAR
New films to watch in cinemas this week: June 17 to 23
Yas Marina Circuit ready to 'welcome back fans' to Abu Dhabi Grand Prix
Father's Day Abu Dhabi 2021: 7 great deals dad will love
Abu Dhabi building project will house mosque, church and synagogue
7 epic things to do in Abu Dhabi this weekend: June 17 to 19
YOU SHOULD CHECK OUT
Our website uses cookies and other similar technologies to improve our site and your online experience. By continuing to use our website you consent to cookies being used. Read our privacy policy here.