Four days of workshops culminating in a free public concert…

The UAE has no shortage of awesome concerts throughout the year – this past weekend’s Party In The Park performances by Liam Gallagher and the Chemical Brothers were proof of that.

What we don’t get enough of, however, is the chance to get up close and personal with performers, truly learning what makes them write the interesting and infectious music that we love to listen to.

That’s the impetus behind the new Music Programme launching this week from the Sharjah Art Foundation. Over four days, writers, composers and appreciators of music will get the chance to interact with Trans-Saharan groove ensemble El Foukr R’Assembly through a series of workshops, seminars and performances. 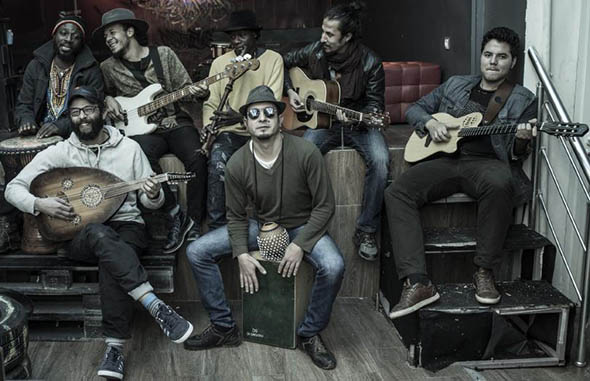 A truly eclectic mix of styles and cultures, El Foukr R’Assembly is comprised of musicians hailing from Algeria, Ghana, Burkina Faso and the Ivory Coast. They draw inspiration from the cultural expression of North and Sub-Saharan Africa mashing together many of the regions disparate genres including Gnawa, Algerian Rai, Saharan Sufi, Afro-Salsa, Ghanaian Highlife and Burkinabe Mandingue.

The band released their debut EP, ‘Look South’ in 2016 – an album that was recorded in a makeshift studio on the edge of the northern Sahara Desert.

As well as leading the numerous workshops that will take place over the four-day event (see below), El Foukr R’Assembly’s residency will culminate in a free concert on Saturday at the Mirage City Cinema in Al Mureijah Square, Sharjah.

Sounds great, what can I get involved in?

These are the events taking place between Monday 13 and Saturday 18 November. They are all free to attend and open to the public, so even if you aren’t a musician you can sit in and watch the band at work.

Arranging Compositions with El Foukr R’Assembly (workshop)
When: Wed 13 – Fri 17 Nov (inquire for timings)
Where: Mirage City Cinema, Al Mureijah Square, Sharjah
What is it: This series of workshops is directed at already established locally-based artists. El Foukr R’Assembly will work closely with them to arrange one of their compositions, ultimately performing it live on stage with the band at the Saturday concert.

Meet El Foukr R’Assembly
When: Tues 14 Nov 8pm – 9.30pm
Where: The Jamjar, Alserkal Avenue, Al Quoz, Dubai
What is it: A chance for fans to meet the members of El Foukr R’Assembly in person complete with a live performance and a short film screening.

The Many We – Storytelling and Oral Traditions (workshop)
When: Wed 15 Nov 8pm – 9.30pm
Where: Al Mureijah Square, Sharjah
What is it: El Foukr R’Assembly will be working with a local poet in a workshop designed to look at various forms of storytelling and oral traditions.

El Foukr R’Assembly will be performing their debut gig in the UAE at 8pm on Saturday 18 November at Mirage City Cinema, Al Mureijah Square in Sharjah and, if it’s anything like the video below, it looks like it’s going to be a proper party.

There will also be a number of free public workshops earlier in the day between 4pm – 7pm complete with food stalls from local vendors so attendees can hangout, eat and make a day of it.

We’ll see you on the dancefloor!

Nightlife
EDITOR’S PICKS
UAE holiday dates announced for Eid Al Adha
READ MORE
Emirates extends suspension of flights from India to UAE again
READ MORE
Coming soon: Everything we know about Ain Dubai so far
READ MORE
Khorfakkan set to open new tourist attraction 580 metres above sea level
READ MORE
MOST POPULAR
A 50 Best Restaurants guide for the MENA region is debuting in 2022
UAE residents stranded in India, Pakistan and more allowed to return
Watch: Incredible video of Saturn captured from UAE mountain
Stay at this luxury Palm Jumeirah hotel for just Dhs299
Watch: Reem Mall and Snow Abu Dhabi close in on completion
YOU SHOULD CHECK OUT
Our website uses cookies and other similar technologies to improve our site and your online experience. By continuing to use our website you consent to cookies being used. Read our privacy policy here.