A huge mural of the UAE's founding fathers has been unveiled

Planning a roadtrip to Hatta over the upcoming long weekend? Then you’re in for a treat as a huge mural of the Emirates’ two founding fathers, HH Sheikh Zayed bin Sultan Al Nahyan and HH Sheikh Rashid bin Saeed Al Maktoum, looking down from high up in the Hajar Mountains has just been unveiled.

Painted on the slipway of Hatta Dam, the artwork measures 80 metres by 30 metres, and is said to be one of the largest murals in the world. 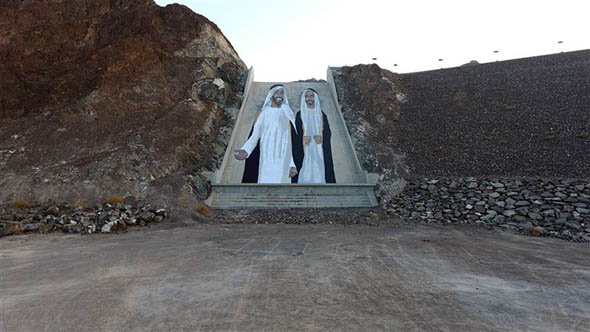 The painting took German artist Andreas Von Chrzanowski (aka Case) two full weeks to complete and was commissioned in order to celebrate the UAE’s 46th National Day on 2 December.

An initiative by Brand Dubai (the cultural arm of the government’s Dubai Media Office), the mural follows a similar art installation project earlier in the year where a bridge on the Palm Jumeirah was transformed into a lush forest, much to the delight of residents.

The mountain town of Hatta (which is located about 130 kilometres east of Dubai) is expected to receive a major makeover over the coming 10 years with the injection more than 400 homes for Emiratis, a mountain track circuit, areas for camping and winter sports facilities all by 2026.