Martin Garrix is no stranger to the UAE. First here in 2014 as part of the annual Sensation Dubai line up at the impressive age of 18, he returned once again to Meydan in 2015 to headline the annual New Year’s Eve concert.

But he’s quick to point out this is his first performance in Abu Dhabi, and when we meet hours before his stellar performance at du forum, the 21-year-old DJ chats animatedly about how much he likes the city, what he’s been up to on his whistle stop to the UAE, and when we can get our hands on his new music. 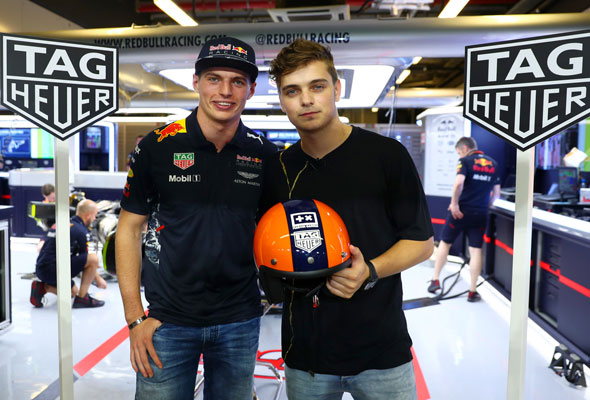 What’s On: So we’ve been keeping an eye on your Instagram while you’ve been in town, what have you been getting up to?

Martin Garrix: It’s great to be back in the UAE, I went to the desert and went on a camel ride, which was amazing.

WO: This is your first trip to Abu Dhabi, right?

MG: That’s right, I’ve never been to Abu Dhabi before, it’s so nice and super cool, I just wish I could stay longer but sadly I leave tomorrow morning so there isn’t much time for having fun. Tomorrow night I’ll be doing a show in Liverpool.

MG: There’s lots of new music coming. There’s actually a new song coming on the first of December. I can’t tell you much about it right now, but I can tell you it’s going to be fun, I’m really excited to release that. I’ve had so much fun this year, I’ve travelled everywhere and next year is also going to be a lot of fun. I’ve scheduled a lot of cool shows and there’s a lot of cool stuff coming up, so watch this space.

WO: Where’s your favourite place to perform in the world?

WO: Is there still somewhere on the bucket list that you haven’t performed?

WO: When you were last interviewed by What’s On, you said you decided to become a DJ after seeing Tiesto perform in 2004. How does it feel to be performing alongside him at du Forum this weekend?

MG: It’s weird, very surreal. I’ve been in the studio with him [Tiesto], we did a song together. It’s crazy, he started as my inspiration, I started making music because of him and then suddenly you’re in the studio and you get to know the person who inspired you. It’s surreal but he’s been a fantastic mentor and he’s given me a lot of advice over the last few years. Everything that’s been happening has been so crazy so I’m super grateful to know him.

WO: Your popularity has spiraled since Animals was released, how do you stay grounded?

MG: It’s weird and crazy and sure it can be hard sometimes but I’m surrounded by an amazing team. I have my parents, I love to bring my family and my friends with me when I tour so when there are so many crazy things going on around me, they manage to make it feel normal. And I get to share all these exciting things with them, which I love.

WO: Do you reckon you’ve changed at all since you started your career?

Nightlife
EDITOR’S PICKS
Ramadan in Dubai: 48 iftars to try
READ MORE
Where can Dubai residents travel? Check out these 14 destinations
READ MORE
Rumours, facts and reveals: New Abu Dhabi bars and restaurants
READ MORE
UAE announces reduced working hours for Ramadan 2021
READ MORE
MOST POPULAR
UAE: Strict restrictions may soon be in place for those who aren't vaccinated
Review: Rainforest camping at The Green Planet Dubai
The rules for children wearing face masks have been updated in UAE
Etihad sale: Surprise gift boxes and a chance to win 50 times your airfare
Break your fast in style at W Dubai - The Palm this Ramadan
YOU SHOULD CHECK OUT
Our website uses cookies and other similar technologies to improve our site and your online experience. By continuing to use our website you consent to cookies being used. Read our privacy policy here.