And you’ll never guess where…

For fans of sneakers, Nike stores are often tantamount to hallowed ground. They’re the place to go if one wants to pick up the latest boxfresh trainers from the world’s biggest sports brand. And it looks like Nike is set to kick things up a notch with plans to open a huge new store in Dubai Mall sometime in 2018.

In an exclusive report from Gulf News several sources close to the brand have confirmed that the new ‘Niketown’ is likely to be the largest in the world – which might make sense considering it’s rumoured to be opening in the massive space where Kinokuniya used to be located.

How big exactly? Well, the vacant space left by the popular Japanese bookstore (which moved to a smaller location elsewhere in the mall earlier this year) clocks in at 68,000 square feet, while the current largest Niketown located in London is a comparatively small 42,000 square feet. That would make the new outlet the biggest Nike store in the world by quite a significant margin because, well, Dubai. 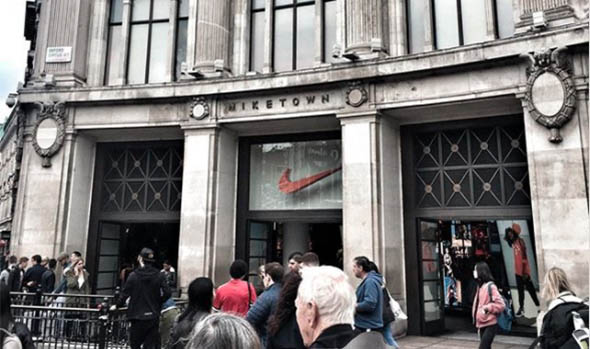 The Niketown in London is currently the largest in the world, but is it set to be eclipsed by the new Dubai Mall outlet?

The report goes on to say that the new store would also signal a reshuffling of the two current outlets located in the mall, with the existing Jordan Brand store expected to move into where the Nike store is currently located on the ground floor near the ice rink.

The Jordan store would then be replaced by a NikeLab, which is the company’s high-end retail concept that focuses on limited edition collaborations and rare footwear. This would be only the ninth NikeLab in the world putting Dubai alongside other cities such as Milan, New York, Tokyo and Beijing.

Nothing is officially confirmed, of course, but if true this is pretty exciting news for the city’s sneakerheads.

Things to do
EDITOR’S PICKS
Ain Dubai will open with fireworks, live music and a drone show
READ MORE
Incredible Aura SkyPool to open in Palm Tower this November
READ MORE
Brit Grand Slam hero Emma Raducanu confirmed for Mubadala Tennis
READ MORE
What’s On Nightlife Awards 2021: Here are the nominees...
READ MORE
MOST POPULAR
O Beach Dubai will no longer be opening on Palm Jumeirah
The most up to date information for entering Abu Dhabi: Oct 2021
First look: Instagram breaking 2D cafe, Forever Rose opens in Yas Mall
Emirates warns passengers to arrive early to DXB airport this weekend
Pics of the week: Your best photos of the UAE
YOU SHOULD CHECK OUT
Our website uses cookies and other similar technologies to improve our site and your online experience. By continuing to use our website you consent to cookies being used. Read our privacy policy here.