The Grammy-winning DJ will open the new nightlife concept on December 22.

We recently brought you the first look at Soho Garden, a brand new nightlife concept opening in Meydan later this year.

And now we can reveal that Grammy Award-winning DJ and producer Roger Sanchez will be flying in to open the new super venue on Friday December 22. 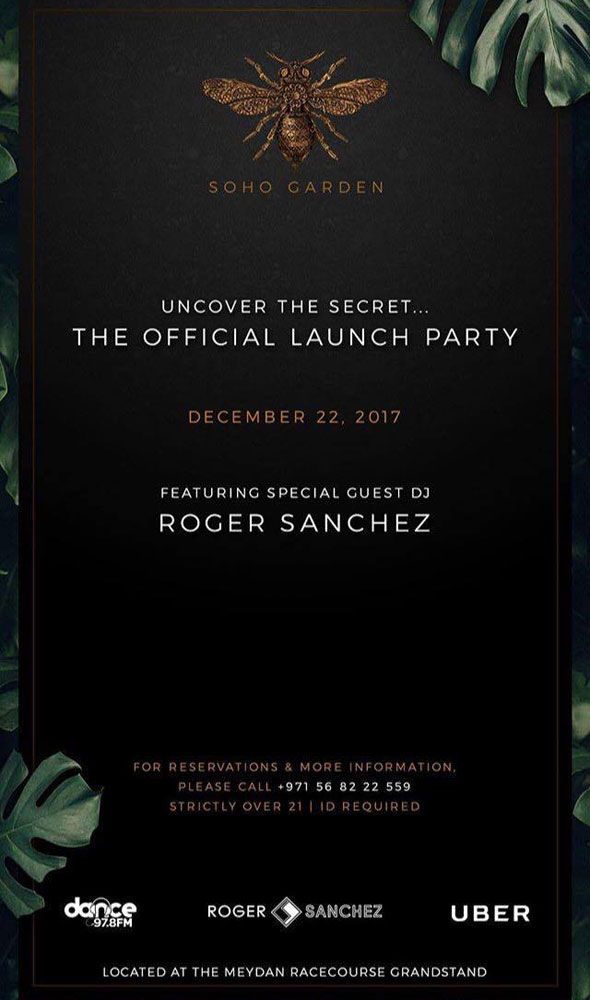 Sanchez, who began his career in the early 90s, is most famed for his remix of Hella Good by No Doubt, for which he won a Grammy in 2003.

The legendary DJ has scored numerous chart-toppers through his career, both with his own music and the remixes he has created for an array of superstars. He’s worked with the likes of Diana Ross, Daft Punk and Kylie Minogue. He also founded two record labels, Stealth Records and Undr The Radar.

Sanchez has recently completed a mammoth tour of world-famous venues around the globe, performing at Cafe Mambo Ibiza, Defected Croatia and Tomorrowland in Belgium.

He’ll be the first of several artists performing at the exciting new venue. We’re already seeing acts like DJ Steve Lawler, Sash, Art Department and Erik Hagleton promoting that they’ll be playing gigs at the venue next year.

Although the first phase of Soho Garden will open on December 22, there’s still more to come.

When fully operational, which is expected to be some time in 2018, Soho Garden will also feature a 10,000 capacity concert stage, nightclubs, pools and several other restaurants and bars.

Nightlife
EDITOR’S PICKS
What’s On Nightlife Awards 2021: Here are the winners...
READ MORE
Where to see fireworks in Dubai
READ MORE
This new ladies' night offers a free open bar every Tuesday
READ MORE
Coming soon: The hottest new bars, restaurants and beach clubs
READ MORE
MOST POPULAR
A new Thursday evening 90's drunch has launched in Dubai Marina
Disclosure and top Red Hot Chilli Peppers tribute to perform at Emirates Dubai 7s
First look: Stunning beach bar February 30 Dubai opens at Palm West Beach
This magical botanical gin garden is back this winter
Huge DJ nights coming to Abu Dhabi soon
YOU SHOULD CHECK OUT
Our website uses cookies and other similar technologies to improve our site and your online experience. By continuing to use our website you consent to cookies being used. Read our privacy policy here.