Ellen DeGeneres has just given Dubai the biggest plug

“I have been there, I love it, I’m talking about Dubai.”

We’ve never met a single person who doesn’t love Ellen DeGeneres – and it turns out, she loves us too.

The talk show icon spoke of her fondness for Dubai during a recent episode of The Ellen DeGeneres Show, in which every single audience member won an all-expenses paid holiday to the emirate.

“Let me tell you about this amazing place,” Ellen told her audience.

“It is a melting pot of cultures with over 200 nationalities living there and they are welcoming to all. There is so much to do, the nightlife is insane.”

You can watch the clip here (she starts talking about Dubai around 6 minutes and 30 seconds):

So, what exactly was up for grabs? Only a six-night holiday valued at US$5000, staying at five-star hotel Atlantis The Palm.

The luxury resort tweeted that they had teamed up with The Ellen Show to offer 425 lucky audience members the prize (that’s a total spend of more than US$2 million – phew!).

We just partnered with @TheEllenShow to take 425 amazing fans and their families to #AWorldAway from their everyday! #12days #AtlantisThePalm #MyDubai

Ellen herself visited the emirate in 2015 with Portia De Rossi, enjoying a private dinner at The Act in the Shangri-La Hotel (the club has sadly closed down since). 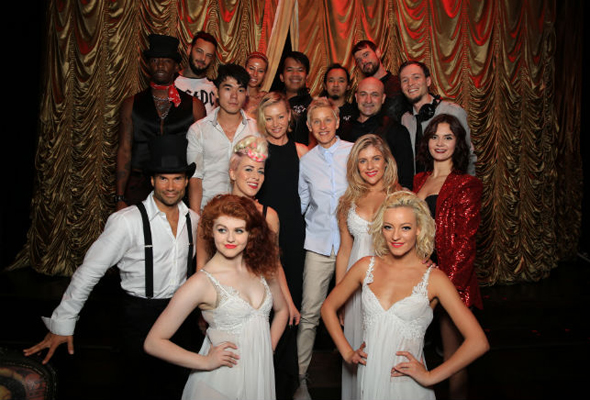 This isn’t the first time she’s offered her fans a trip to the UAE, either – last year, she partnered with Emirates to give every single audience member a flight to the city.

The year before, she gave away an all-expenses paid trip to Abu Dhabi.

You can also watch here the hilarious moment in 2010 when Ellen phones up the Burj Khalifa (then called the Burj Dubai) and gets called ‘Ms Helen’ in the process: