The under-construction bridge on Sheikh Khalifa bin Zayed Street is set to ease traffic in the area.

The Roads and Transport Authority (RTA) is set to open the main bridge on Sheikh Khalifa bin Zayed Street in January 2018, according to officials. 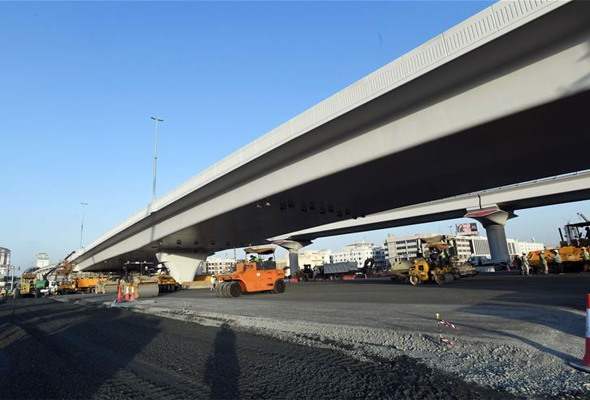 ALSO READ:
This RTA service is the best way to watch this year’s NYE festivities
Two key Dubai roads will have their traffic diverted until July 2018

As part of ongoing improvements in the area, a tunnel linking Al Garhoud and Mina Rashid in both directions is also set to open in the second quarter of 2018.

According to Mattar Al Tayer, director-general and chairman of the board of executive directors of the RTA, the full project is 70 per cent complete.

It’s part of a larger masterplan by the RTA to accommodate the growing traffic volumes across the city, with improved roads, bridges, crossings and underpasses.

“The objective of such works is to ensure a free traffic movement from the Trade Centre roundabout to the intersection of Sheikh Khalifa bin Zayed Street and Al Kuwait Street through a two-lane bridge in each direction.”

News
Transport
EDITOR’S PICKS
What’s On Nightlife Awards 2021: Here are the nominees...
READ MORE
It's back! What's On Lock In returns to Media One Hotel
READ MORE
Arts and culture: 5 spots we can't wait to visit at Expo 2020 Dubai
READ MORE
UAE petrol prices are set to decrease in September 2021
READ MORE
MOST POPULAR
Movie review: How good is new sci-fi epic, Dune?
Pics of the week: Your best photos of the UAE
A stylish new Southern-European Neo Bistro is opening in Dubai
Staycation at this stunning hotel which is now dog-friendly
Get an Expo 2020 Dubai monthly pass for Dhs95 valid for the whole of October
YOU SHOULD CHECK OUT
Our website uses cookies and other similar technologies to improve our site and your online experience. By continuing to use our website you consent to cookies being used. Read our privacy policy here.