To be a Santa Claus in Dubai, one of the world’s most diverse cities, it helps to be multilingual.

Luckily, the in-house Santa at the Le Meridien Dubai Hotel is fluent in four languages.

“I speak French, English, German and Spanish. I’m working on my Arabic and Russian, as well.”

With more than 200 nationalities living in the UAE, Santa gets a pretty good cross section of the 1.6 billion children he’ll be delivering presents to this Christmas Eve.

In the lead-up to the big day, he’s had visitors from Lebanon, India, France, and the UK, as well as local Emirati children.

“It’s lovely to see so many children from so many different countries,” Santa says. “Not everybody celebrates Christmas, of course. But they just love to see Santa and say hello.”

ALSO READ:
Christmas in Dubai: 28 Christmas Day lunch and dinners in Dubai
15 things to do in Dubai this weekend 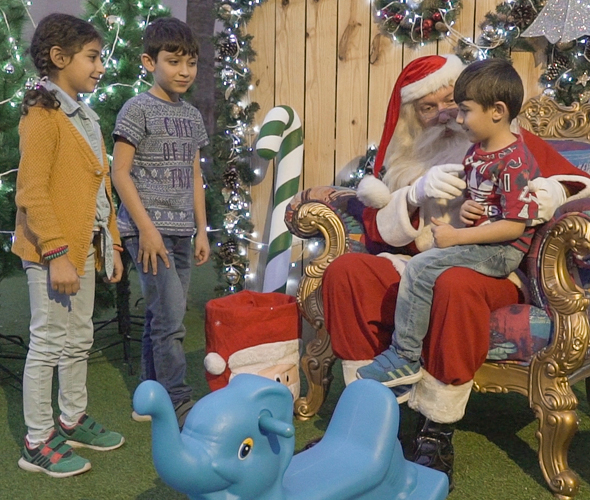 Though Santa is normally based in the North Pole, he says his residency in Dubai has its logistical advantages.

“Dubai is very centralised, you see. From here, I can rapidly fly to Africa or Asia – it’s very good for me.”

While Santa remains loyal to his reindeer fleet, he admits he needs a slightly hardier animal for negotiating the UAE’s desert terrain.

And how does he unwind when it’s all over? Well, it’s pretty much Santa’s version of recovering from a Friday brunch.

“I try to digest all the cookies and milk I ate the night before. I’ve also been offered shawarma in the past. I like that, it’s very nice.”

Christmas
EDITOR’S PICKS
UAE holiday dates announced for Eid Al Adha
READ MORE
Another update: Emirates extends suspension of flights from India to UAE
READ MORE
Coming soon: Everything we know about Ain Dubai so far
READ MORE
Khorfakkan set to open new tourist attraction 580 metres above sea level
READ MORE
MOST POPULAR
A fun new Saturday brunch is launching at MASTI Dubai
Review: Newton
Free chicken wings for three days at this celeb-fave Abu Dhabi restaurant
Review: Explore the Palm Jumeirah with a stay at St. Regis Dubai, The Palm
Etihad: India flights on hold until at least August 2
YOU SHOULD CHECK OUT
Our website uses cookies and other similar technologies to improve our site and your online experience. By continuing to use our website you consent to cookies being used. Read our privacy policy here.