Details of this year's Abu Dhabi Tour have been announced

The capital’s professional cycle race returns for the fourth year

Some of cycling’s biggest names including Mark Cavendish and Elia Viviani are returning to race in Abu Dhabi next month for the fourth edition of the Abu Dhabi Tour – and this year, fans will get to see an extra day of racing. The 2018 edition features five stages, instead of four.

The Abu Dhabi Tour kicks off Wednesday, February 21 and finishes Sunday, February 25 and there’s a few changes to this year’s schedule. There’s no racing at Yas Marina Circuit this time, instead, an 11.8km Time Trial Stage (where the pros ride one at a time and try to record the fastest time) around Al Maryah and Al Reem Islands has been added, and for the first time in the history of the Tour, the last stage will take place in Al Ain, with a climb up Jebel Hafeet. In previous years, Hafeet has been the penultimate stage.

Ending the Tour with a time trial and a climb should make for a much more dramatic conclusion – there’s a very good chance we wont know the winner until the last metres of the race.

There’s three other stages, including a 189km ride through the Western Region (called the Al Dhafra Stage). The second stage, the Yas Island Stage, heads towards Al Bahia, Shahama and Khalifa Port and is 154km long. The third stage, called the Nation Towers Stage, is the one where the pros get to go sight-seeing – it is a 133km loop of Abu Dhabi, and goes down the Corniche, past the Sheikh Zayed Grand Mosque and near Yas Marina Circuit. You can check out all the routes in the map below. 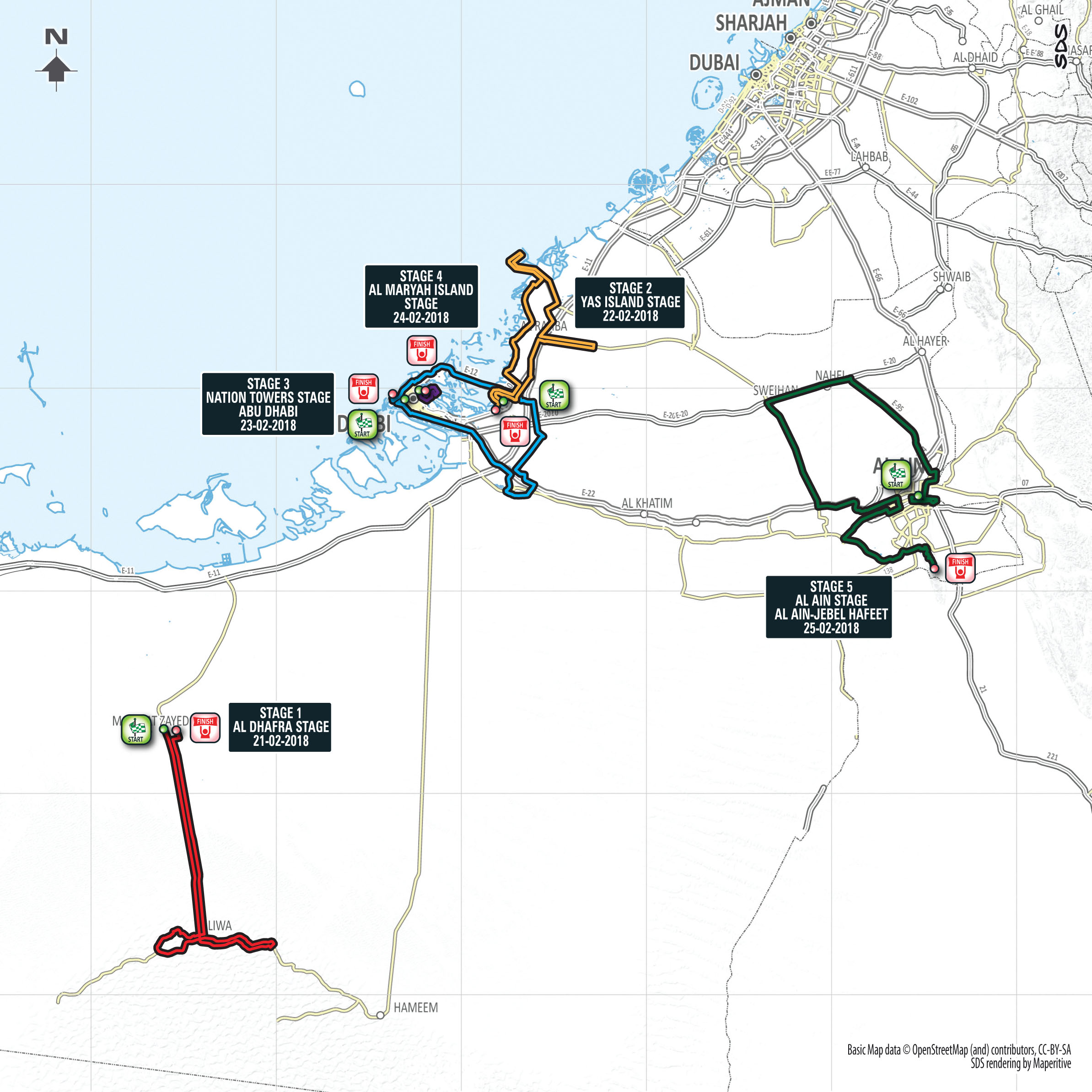 Some big names will be riding in Abu Dhabi – in total, 17 of 18 of the sport’s World Tour teams (the sport’s best) are racing in the capital, including Team Sky, BMC Racing Team, Movistar and our very own UAE Team Emirates. Riders taking part include Brit Mark Cavendish, the Tour’s official ambassador, and one of the sport’s greatest sprinters, Italian sprinter and gold medal Olympian Elia Viviani, Dutchman Tom Dumoulin, who won the Giro d’Italia in 2017, and UAE Team Emirate’s star Rui Costa, the winner of the 2017 Abu Dhabi Tour.

News
Sport & Fitness
EDITOR’S PICKS
Ain Dubai will open with fireworks, live music and a drone show
READ MORE
Incredible Aura SkyPool to open in Palm Tower this November
READ MORE
Brit Grand Slam hero Emma Raducanu confirmed for Mubadala Tennis
READ MORE
What’s On Nightlife Awards 2021: Here are the nominees...
READ MORE
MOST POPULAR
Bar of the month: Ray's Bar, Conrad Abu Dhabi Etihad Towers
DIFC Art Nights is returning in November for the second time this year
10 of the best Halloween brunches to book in Dubai
Sheikh Hamdan has been spotted dining at DIFC's newest restaurant
6 great things to do in Dubai this week: October 17 to 20
YOU SHOULD CHECK OUT
Our website uses cookies and other similar technologies to improve our site and your online experience. By continuing to use our website you consent to cookies being used. Read our privacy policy here.