There's an amazing hospital in the middle of the UAE desert

Check out this hospital in the middle of nowhere…

When driving towards Ras Al Khaimah on Sheikh Mohammed bin Zayed Road, look out your window and you’ll see a rather incredible sight: A huge, modern hospital, rising from the sand dunes in the middle of the desert.

You could be forgiven for thinking it was a mirage on the dusty skyline. But Sheikh Khalifa Specialty Hospital, located about 88km north-east of Dubai, is one of the largest specialist hospitals in the Middle East.

Why then, is it in the middle of nowhere? The location is actually very strategic. Before the hospital officially opened in 2014, residents of the UAE’s northern emirates would have to drive or fly all the way to Dubai or Abu Dhabi for specialist treatment. 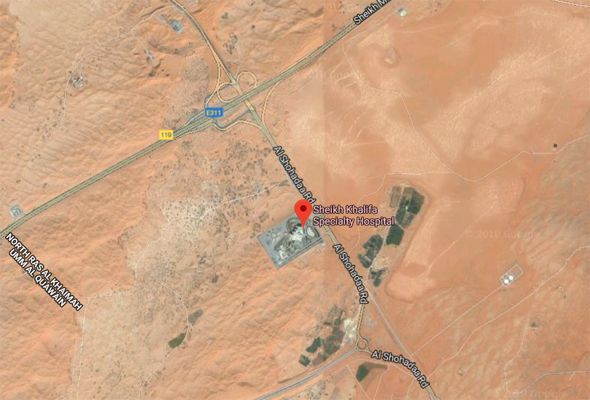 The site was carefully chosen so the hospital would be at the midpoint of the five northern emirates: Sharjah, Ajman, Umm Al Quwain, Ras Al Khaimah and Fujairah.

The hospital cost Dhs1 billion to build, and was funded by a grant from HH Sheikh Khalifa bin Zayed Al Nahyan, president of the UAE and ruler of Abu Dhabi.

This video shows the hospital being built in the desert:

The hospital was designed by architectural firm Perkins Eastman, which “looked to the surrounding natural environment for inspiration”.

In an interview with Healthcare Design magazine, Jonathan Stark, principal and executive director for Perkins Eastman, said they used a local limestone on the building facade that blended in nicely with the area’s unique reddish sand. 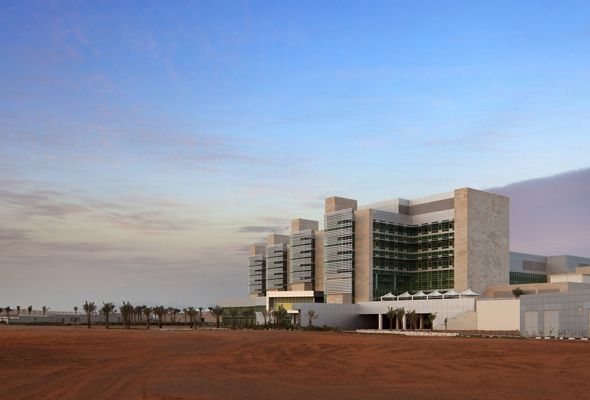 “We also tried to layer the façade in such a way that it reflects the shifting sands—that’s the reason for the curved façade. The desert undulates quite a bit, so we wanted to reflect that.”

The architects also had to consider the high heat and humidity, intense sunlight and strong winds in the desert, positioning the hospital so it was protected from the sun.

We think the results are pretty spectacular…