The capital’s very own professional cycling race starts today, and What’s On caught up with the man who won it all last year, who secured victory thanks to a barnstorming climb up Jebel Hafeet

Cycling is booming in the UAE, so much so that today sees the fourth edition of the emirate’s pro-cycling race take place – the Abu Dhabi Tour will features some of the world’s best riders and this year, fans are in for an extra treat, as the race has been expanded to five days, instead of four.

One stage will take in the emirate’s Western Region, another will loop Abu Dhabi city, and the last is the most challenging one, a climb up Al Ain’s 12km long Jebel Hafeet mountain. There’s some local flavour at the Tour as well – last year’s winners were the country’s very own pro team, UAE Team Emirates. Victory was secured after Portuguese star Rui Costa won up Hafeet in Abu Dhabi’s garden city. He’s back again this year to try and retain his crown. 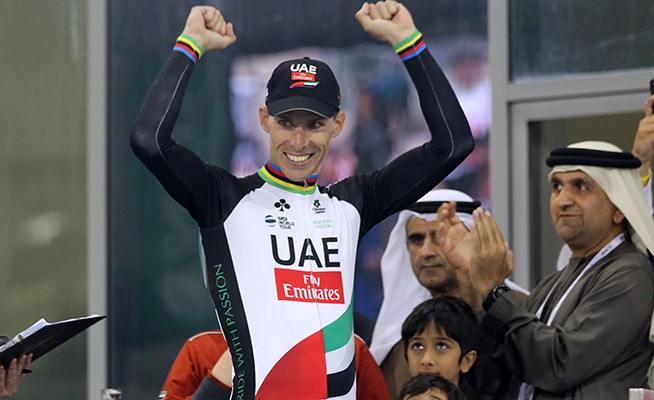 How do you feel UAE Team Emirates performed in its first year?
The team performed well and consistently during the whole season. We had our first historic victory in January in Argentina and in October we celebrated the end of the season by winning the Tour Of Turkey. All the riders in the team are honoured to have the name and the flag of the UAE on our kits. We won in Abu Dhabi, and we collected a bunch of second places, too.

Will you be aiming to win again in Abu Dhabi? Or will you have a different role on the team this year?
The victory in Abu Dhabi last year was so gratifying I’d really like to do it again. It’s not easy, because the starting list will be once again full of top riders, with many you see at a Grand Tour [such as the Tour de France] or a Classic.

What was your favourite stage of the Abu Dhabi Tour last year and why?
It’s pretty easy to answer to this question: the summit arrival stage at Jebel Hafeet, which I won – it gave me the leadership of the race’s general classification category. The climb is on a wide road and the middle section is really demanding. You have to manage your energy on it while deciding on the best moment to attack. I pulled off a perfect race and it was great to celebrate with our new sponsors and the team’s management – the joy was huge.

What advice would you give to young emiratis and expats who want a career in pro-cycling?
Begin cycling just for fun – think of the bike as a pure game, a hobby to perform with passion and dedication. If you have fun and your skills allow you to be pretty competitive, then you can start to pay attention to the details, such as nutrition, training, caring for your bike and the correct lifestyle for an athlete to follow.

Is the team getting more involved with local riders in the Middle East?
The aims of this team are wide. One of the fundamental values of the project is to inspire the UAE to cycle, in order to have a healthy lifestyle and to improve the quality of a new generation of riders from the emirates. The team’s management and the UAE sports directors monitor cyclists from the UAE and it would be great if other emirati riders could join the team.

You have one emirati on the team – Yousif Mirza. How is he getting on?
I really love Yousif, he’s such a great guy. I like to share a room with him at the races or at the team camps. Immediately after having joined the team, Yousif demonstrated the correct attitude for a World Tour team – a strong desire to improve, a willingness to support the captains and a good relationship with his fellow pros. I’m sure that in 2018 he’ll improve his results and his competitiveness.

Is the team stronger this year with new signing Italian Fabio Aru joining?
A top rider like Aru makes the team’s roster even stronger – he’ll guarantee that the team will be competitive in a larger number of races.

And what about Norwegian Alexander Kristoff? What does he bring to the team?
Kristoff’s skills allow him to be a protagonist in the Northern Classics [tough European one-day races] as well as in the sprints. It’s important that in the team there are riders who make us competitive on the cobblestones and the Belgian hills, and he can help inspire our young talented cyclists who have already demonstrated in the past season their good skills for those kinds of races.

News
Sport & Fitness
Things to do
EDITOR’S PICKS
UAE holiday dates announced for Eid Al Adha
READ MORE
Another update: Emirates extends suspension of flights from India to UAE
READ MORE
Coming soon: Everything we know about Ain Dubai so far
READ MORE
Khorfakkan set to open new tourist attraction 580 metres above sea level
READ MORE
MOST POPULAR
It's Dhs350 to brunch, stay and play at the What's On Lock In this weekend
After party: 8 of Dubai's best after-brunch deals on a Friday
Jones The Grocer is bringing its cheese, grape and jazz night to Abu Dhabi
A two-day art festival is taking place in Alserkal Avenue this weekend
Transport to Greece as Opa's monthly brunch returns
Al Qana update: Abu Dhabi mega project announces four new F&B outlets
YOU SHOULD CHECK OUT
Our website uses cookies and other similar technologies to improve our site and your online experience. By continuing to use our website you consent to cookies being used. Read our privacy policy here.