The King and Queen of Jordan

King Abdullah II and Queen Rania of Jordan touched down in the UAE this week to meet with HH Sheikh Mohammed bin Rashid Al Maktoum, vice president of the UAE and ruler of Dubai, and HH Sheikh Mohammed bin Zayed Al Nahyan, Crown Prince of Abu Dhabi. Queen Rania was looking stylish, as per, rocking an outfit by Dubai-based designer, Bambah Boutique.

Here’s another look at that gorgeous dress:

A couple of weeks ago their son, 23-year-old Crown Prince Hussein of Jordan, was also in the UAE to attend the World Future Energy Summit. He was spotted visiting Sheikh Zayed Grand Mosque in Abu Dhabi (and looking pretty dapper, we must say).

Manchester United legend Patrice Evra regularly trains in the UAE, but this week he took a bit of time out to soak up the views with Skydive Dubai. He’s since deleted the clip of his jump, but here’s a cheeky screenshot: 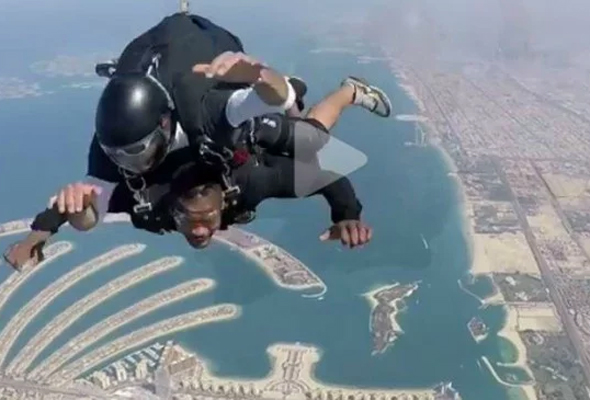 Home & Away star Tammin Sursok was recently in Dubai to help launch Pakistani make-up brand Zero Makeup at Bloomingdale’s in The Dubai Mall. She shared this cute video of her family enjoying a camel ride out in the desert:

The Bachelorette Australia star Georgia Love visited Dubai with Bachelor beau Lee Elliott this week, and it looks like the pair managed to nab a stay in the Burj Al Arab.

And here’s the happy couple on a desert safari:

YouTube star Joe Sugg (aka, brother of Zoella) has been gallivanting about the UAE over the past couple of weeks, sharing a series of self-indulgent snaps from the desert.