Almost a decade after arriving in Dubai, the world famous cruise ship is set to become a permanent hotel and museum.

It’s been nearly ten years in the making, but the world-famous QE2 cruise ship is reportedly set to open soon in Port Rashid. The famous ship, which first arrived in Dubai in November 2008 is set to be both a hotel and museum.

The vessel, described by experts as the greatest ship the world, has been undergoing a quiet makeover, with major progress made in the last year ahead of the impending reopening.

Signs outside of the ship now advertise for the hotels main entrance, as well as visitor parking. 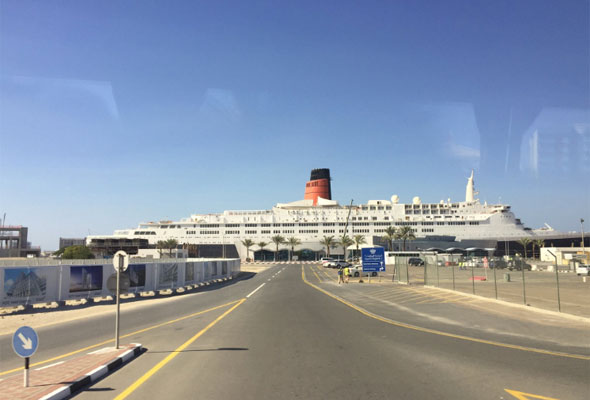 Although not confirmed by Port, Customs and Free Zone Corporation (PCFC), who are now responsible for the QE2, some sources claim that the ship will open in the first half of the year.

The ship, which has steamed six million miles, carried 2.5 million passengers and even been to war, is set to open as a 300-key hotel.

The reopening of the famous cruise liner which first set sail in 1969, has been widely anticipated worldwide by Maritime experts, fans and many fond holiday makers who spent time on the ship.

While few details of the hotel are currently known, a brand new website, qe2.com, has just gone live. The website advertises that the hotel will offer ‘a new level of hospitality’ as well as a ‘royal experience’. We’re hopeful that some of the ships original features are still there too.

As well as the hotel, we’re expecting a maritime museum to open on the ship, with memorabilia from the ships four decades as a working cruise ship.

We can’t wait to see inside…

News
Staycations
Travel
EDITOR’S PICKS
What’s On Nightlife Awards 2021: Here are the nominees...
READ MORE
It's back! What's On Lock In returns to Media One Hotel
READ MORE
Arts and culture: 5 spots we can't wait to visit at Expo 2020 Dubai
READ MORE
UAE petrol prices are set to decrease in September 2021
READ MORE
MOST POPULAR
Pics of the week: Your best photos of the UAE
How to use Playkey.me, the region's first supercharged cloud gaming service
The Mai Dubai half marathon is back in October
Exhibitions, workshops and more to experience at Sharjah Art Foundation
New Irish pub McCafferty's opens second venue in Dubai
YOU SHOULD CHECK OUT
Our website uses cookies and other similar technologies to improve our site and your online experience. By continuing to use our website you consent to cookies being used. Read our privacy policy here.