And here’s everything you need to know about it…

Measuring 2.83 kilometers long (that’s the equivalent of more than 28 football pitches), the record-breaking zipline runs through the mountains of Jebel Jais at a hair-raising 1,680 metres above sea level.

All ages are welcome to take on the death-defying zip line, but ‘fliers’ have to be between 45kg and 150kg in weight and at least 120 cm tall. It costs Dhs650 per person.

So how does it work?

When you first get to Jebel Jais (it’s about an hour drive from Dubai), you get kitted out in the zip-lining kit, as well as getting a safety briefing at the welcome center. Then, it’s a trip up to the top of the launching platform. Designed to look like a giant falcon, it stands at an impressive (and oh so scary) 1,680 metres above sea level. 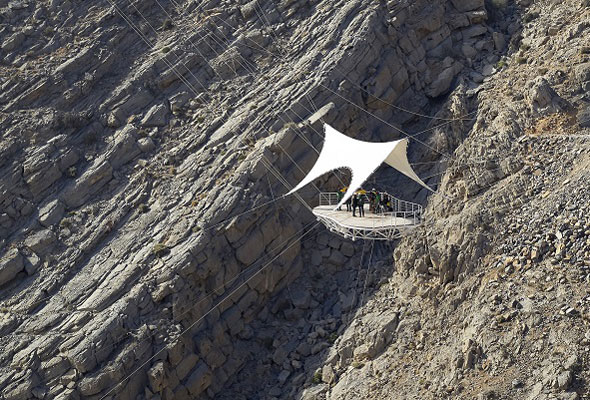 ALSO READ:
Dubai Marina zipline is now open and here’s what it’s like…

With a quick safety reminder, you’re strapped in superman style, and off you soar.

The 2.83km trip takes then reaches speeds of up to 120km. But the fun doesn’t end when you hit the first suspended platform, as there’s a second part of the zipline. 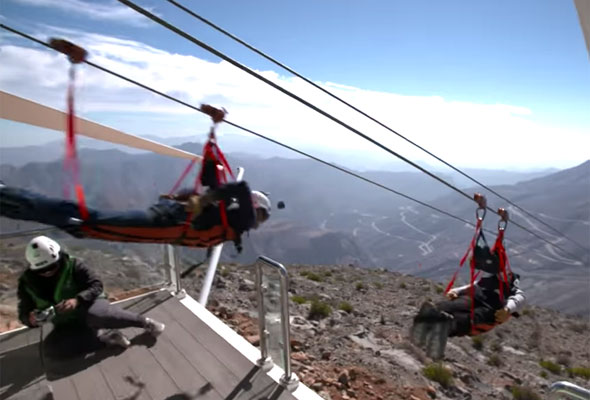 The suspended platform, which has an oh-so insta-worthy transparent floor is stationed 80 metres above the ground. From here, you’ll get to do a secondary 1km zipline which lands you back at the foot of the mountains.

When you’re done, you’ll get an official Jebel Jais flight certificate, a picture against the Jebel Jais Wall of Fame and, for a limited time, go pro footage of your flight.

Outdoor
Sport & Fitness
EDITOR’S PICKS
The highest restaurant in the UAE is set to open on October 1
READ MORE
Video: Take a peek inside 50 Cent's lavish Dubai hotel suite
READ MORE
All of the best Sunday night deals in Dubai
READ MORE
Here's why Kite Beach Centre in Umm Al Quwain is the UAE's best-kept secret
READ MORE
MOST POPULAR
Here’s what went down at the What’s On Lock In – Family Edition: Fairmont Bab Al Bahr
There’s going to be a firework display in Dubai this week
Goodbye summer: This stunning outdoor terrace reopens on Thursday
31 of the best brunches available now in Abu Dhabi
Fairmont, The Palm launches 24-hour flash sale on stays
YOU SHOULD CHECK OUT
Our website uses cookies and other similar technologies to improve our site and your online experience. By continuing to use our website you consent to cookies being used. Read our privacy policy here.