The UAE’s two professional races will become one, starting next year

For the past few years, the UAE has had two professional cycle races – one in Dubai, the other here in the capital. But that’s all about to change. Starting in 2019, the country will have just one, called the UAE Tour.

The new, merged race is expected to run in February, the same as the two events currently do now, and will feature seven days of racing all over the country’s seven emirates. The events in Dubai and Abu Dhabi featured five days each last month. The Dubai Tour has been running for five years, the Abu Dhabi Tour for the past four.

‘We hope that all the emirates participate in it. The distance will vary from stage to stage but in the seven emirates we have more places to discover,’ says Abu Dhabi Sports Council’s general secretary Aref Al Awani. ‘We have approached the UCI [pro-cycling’s governing body] to get the name changed and for the approval for the seven stages. The only thing that is under discussion is how to fit the race in the best possible time of the year.’

You can see Al Awani and Saeed Hareb, Dubai Sports Council’s secretary general, signing the agreement in the tweet below.

It’s not yet been confirmed how many of the days of racing will take place in Abu Dhabi and how many in Dubai and elsewhere. The routes of previous tours have only been revealed a few weeks before races, so don’t expect any news on that until early 2019. 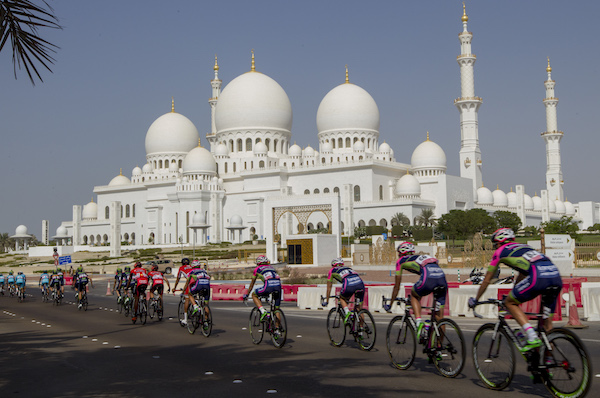 Both of the current UAE tours have a reputation for pulling in the sport’s biggest names, such as British sprinter Mark Cavendish, and the Abu Dhabi Tour is categorised as a World Tour race, meaning it appears on the same calendar as the sport’s top events such as the Tour De France. The Dubai and Abu Dhabi Sports Councils have claimed the new event will retain that World Tour status.