Does your phone say 'Labour Day' this morning? Here's why...

You may have noticed this morning that where your network provider usually displays on your smart phone, the words ‘Labour Day’ now appear. Well, that’s because both major UAE networks ‘du’ and ‘etisalat’ are marking World Labour Day.

World Labour Day, which occurs each year on May 1, is a day dedicated to celebrate the working classes and laborers. 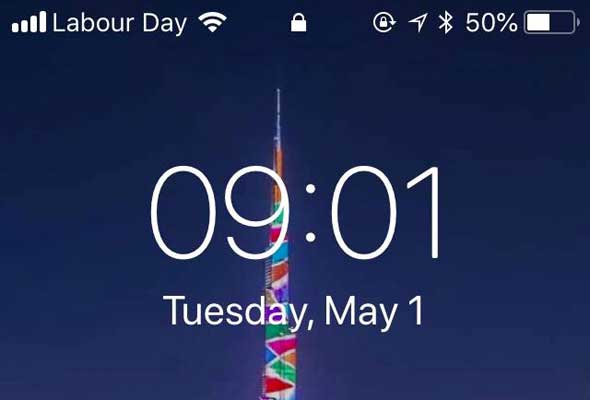 And we weren’t the only ones to notice it, as several eagle-eyed residents took to social media to share their views:

Proud of being Residence of UAE pic.twitter.com/liLtW4mRZp

Although the chance came in on iPhones, it didn’t look like the same had happened on Android phones.

Did you see it this morning?

News
EDITOR’S PICKS
The highest restaurant in the UAE is set to open on October 1
READ MORE
Video: Take a peek inside 50 Cent's lavish Dubai hotel suite
READ MORE
All of the best Sunday night deals in Dubai
READ MORE
Here's why Kite Beach Centre in Umm Al Quwain is the UAE's best-kept secret
READ MORE
MOST POPULAR
Spike Sports Bar is the ultimate casual hangout spot
Here's where to celebrate Oktoberfest in Abu Dhabi
These Dubai restaurants have reopened their outdoor terraces
Want to know the secret to a perfect weekend? Hint: it has an Italian accent
Join a 'Mean Girls' Netflix party with themed cupcakes on October 3
YOU SHOULD CHECK OUT
Our website uses cookies and other similar technologies to improve our site and your online experience. By continuing to use our website you consent to cookies being used. Read our privacy policy here.