Dubai’s Toyota Tower has witnessed some pretty big transformations in the cityscape over the last 44 years – and now it’s time for the building to undergo a change of its own.

The concrete block on Sheikh Zayed Road has lost its flashing neon “Toyota” sign, which was so striking it gave the building its nickname (its actual name is the Nasser Rashid Lootah Building).

At least one social media user has noticed the missing sign:

ALSO READ: These pre-oil photos of Dubai show what life was like over 50 years ago

According to The National, the sign was recently removed due to the advertising contract with Toyota coming to an end. A new sign – not featuring Toyota – will be erected in the coming weeks.

Built in 1974, the 15-storey tower was at that time one of only three buildings in the area, which was then known as Defence Roundabout. It is considered one of Dubai’s first residential towers. 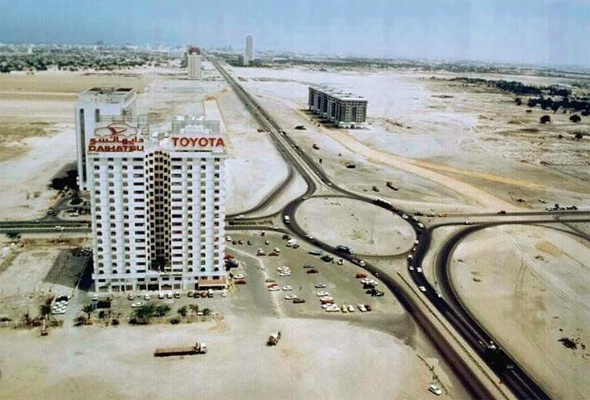 Over the years, its future has been called into question as Downtown Dubai rapidly developed around it. But somehow, it has managed to stand the test of time – even though it might need a new name now…

News
EDITOR’S PICKS
UAE holiday dates announced for National Day
READ MORE
Emirates Dubai 7s is back: Here's why we're excited...
READ MORE
Tennis ace Andy Murray to play at Mubadala World Tennis Championship
READ MORE
UAE 50: Where to watch National Day fireworks in Dubai
READ MORE
MOST POPULAR
This lively new brunch brilliantly blends Brazilian and Lebanese cuisines
There's a special lights and fountain show at Burj Khalifa tonight
RTA announces free parking in Dubai for National Day
Everything you need to know about Emirates Dubai 7s
Marriott Downtown: Half price brunch, spa and dining for Jubilee weekend
YOU SHOULD CHECK OUT
Our website uses cookies and other similar technologies to improve our site and your online experience. By continuing to use our website you consent to cookies being used. Read our privacy policy here.