Here's how to watch the 2018 FIFA World Cup in Dubai

The 2018 FIFA World Cup in Russia is less than two weeks away and football fans the world over are getting ready to support their favorite teams as they compete for glory in the sport’s biggest international tournament.

Over the weekend, however, football fans in the UAE were left a little in the lurch as to how they would watch the highly anticipated sporting event.

Etisalat – the country’s largest telco – had yet to announce its World Cup packages and, even worse, the Dubai-based Du, had seemingly pulled the beIN Sports channels from its cable TV service that would be carrying the matches. Du posted the following explanation on its website: 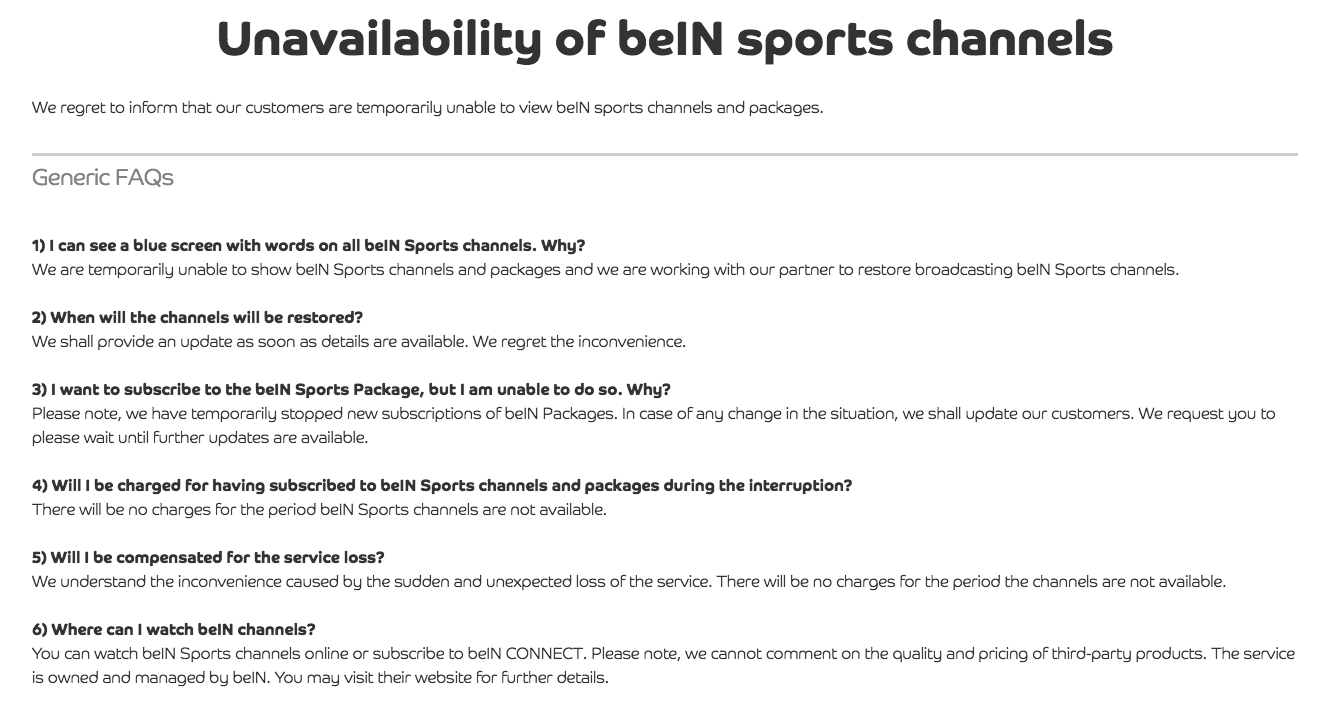 For their part, Du were active on social media confirming to customers that they would not be charged for the service during the period the channels were unavailable and, if customers wanted, they could cancel their beIN Sports subscription without any penalties.

Hello, we are temporarily unable to show beIN sport channels and packages and we are working with beIN Sports MENA to restore broadcasting beIN Sports channels. However you will not be charged for the period where the pack is not available. Thanks

As you can imagine, things were looking dire. Luckily, the kerfuffle appeared to be just that, with Etisalat announcing its World Cup package (see below) at around 11am on Sunday, and then on Monday morning, Du confirmed via its website that it too would resume broadcasting the missing beIN Sports channels, stating “BeIN Sports FIFA package will be available for subscription with du very soon. We will inform you once the subscription starts,”

An official announcement from Du followed shortly after confirming that all 64 World Cup matches will be broadcast in full HD through a standalone package that customers can subscribe to.

A report from Gulf Business, gives a bit more clarification as to the reason why the channels went off-air in the first place. Du had apparently failed to reach a suitable negotiation with the Qatar-based beIN Sports when its initial broadcast agreement ended on May 31.

Ok, so what are my options now to watch the World Cup in Dubai?

Etisalat announced on Sunday that it will be broadcasting the World Cup as a standalone package for its customers.

The package will cost Dhs555 (excluding VAT) and be available on channel 777 of its eLife service. Speaking to Gulf News, a source at the telco said that all beIN Sport channels “are working as normal”.

Du have announced the launch of four exclusive beIN Sports channels for the World Cup. The package includes live coverage of all 64 World Cup matches in full HD and will cost Dhs551 (excluding VAT).

“We are delighted to offer this incredible event to our valued customers and add life to life by screening all 64 football matches across our dedicated beIN SPORTS channels. We continue to offer complete transparency of service for our customers, here enabling them to enjoy the biggest showpiece in the football calendar,” said Fahad Al Hassawi, Deputy Chief Executive Officer

It’s also interesting to note that in 2014, football website Four Four Two Arabia recalls that that Du rolled out its World Cup package only 15 days before the start of the tournament, meaning that this year they’re cutting it even closer if they want to sign up subscribers.

With the opening game of the tournament between Russia and Saudi Arabia set to kick off on Thursday, June 14, football fans in Dubai will not doubt be breathing a massive sigh of relief now that it looks like they will be able to enjoy the summer’s football showcase without fear of missing any of the action.

TV
EDITOR’S PICKS
13 Sheikh Hamdan-approved restaurants in Dubai
READ MORE
Dubai brunches temporarily banned in new preventative measures
READ MORE
12 upcoming Dubai mega-projects we can't wait for
READ MORE
17 of the best beach bars in Dubai for sundowners
READ MORE
MOST POPULAR
Win gold, check out art installations and more at City Walk this Ramadan
6 fun things to do in Abu Dhabi this week: April 11 to 14
6 awesome things to do in Dubai this week: April 11 to 14
Explore Abu Dhabi's rich history at this renovated architectural gem
Here's why you have to dine at Festival Plaza during Ramadan
YOU SHOULD CHECK OUT
Our website uses cookies and other similar technologies to improve our site and your online experience. By continuing to use our website you consent to cookies being used. Read our privacy policy here.