Dubai has plans to expand this airport to accommodate spacecraft

Dubai International airport is one of the busiest in the world, and with no signs of slowing down, the government is keen to look beyond conventional forms of passenger transport.

The Dubai Aviation Engineering Projects initiative, announced this week, would look at transforming Al Maktoum International airport into hub for supersonic, hypersonic and space travel, as well as standard aircraft.

The multi-mode super port project will eventually become the premier hub for future travel, featuring the region’s first space port and launch site. The below infographic shows the various stages it would go through to reach ‘cosmotropolis’ status: 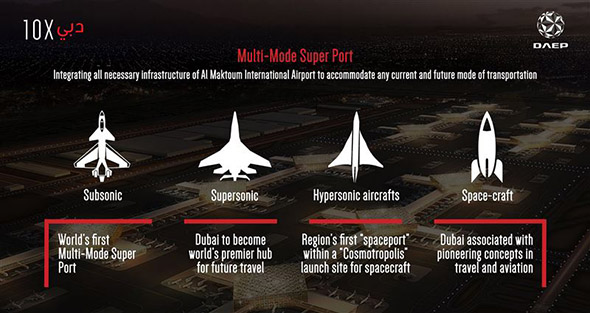 The basic idea would be to allow passengers to transfer seamlessly from conventional aircraft to spacecraft and vice versa.

A short video posted by Dubai Media Office on Twitter goes on to explain how the hub would also connect land-based transport methods such as car, train and even hyperloop for a seamless travel experience for future passengers.

The initiative falls under Dubai’s 10X plans to put the city 10 years ahead of its global peers.

Tech
Transport
EDITOR’S PICKS
Ain Dubai will open with fireworks, live music and a drone show
READ MORE
Incredible Aura SkyPool to open in Palm Tower this November
READ MORE
Brit Grand Slam hero Emma Raducanu confirmed for Mubadala Tennis
READ MORE
What’s On Nightlife Awards 2021: Here are the nominees...
READ MORE
MOST POPULAR
Celebrate creativity at City Walk during this three-weekend event
This Heinz Beck brunch at Waldorf Astoria just got an upgrade
10 brilliant things to do in Abu Dhabi this long weekend: Oct 21 to 23
Experience Arabesque elegance at Asil's Saturday lunch
If there's one place to be this Halloween, it's Warehouse
YOU SHOULD CHECK OUT
Our website uses cookies and other similar technologies to improve our site and your online experience. By continuing to use our website you consent to cookies being used. Read our privacy policy here.