JLT is getting a dedicated bus and taxi lane next week

Drivers around the JLT area take note, as from July 1 the Road’s and Transport Authority (RTA) will activate a new dedicated bus and taxi lane.

It’s the third phase of the Masar project, and will cover a 1.8km distance at the approaches of JLT Metro Station.

From the first of July, any cars that enter the dedicated bus and taxi lane will be fined Dhs600. Fines will be issued either through RTA’s surveillance cameras or manually through Dubai Police patrols. Regular vehicles can only use the dedicated lanes when entering/exiting subsidiary roads. 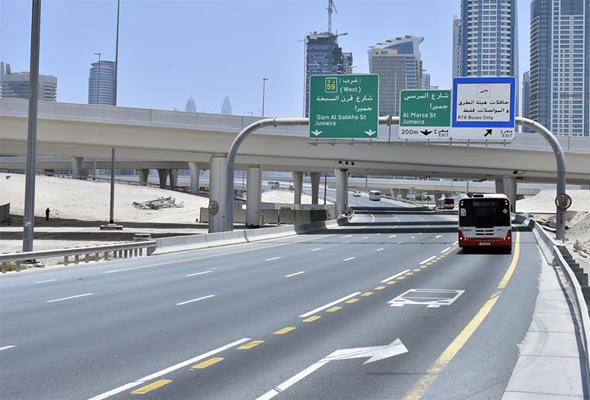 “During the past few months, the preparatory phase of this scheme started in the area, but without involving, fines. The introduction of the system has seen a reduction in the number of vehicles using the dedicated bus and taxi lane” said the RTA’s director of transportation systems, Adel Shakri. “The main objective of the scheme is to curb traffic congestion through offering speedy, effective and safe public transport services,” added Shakri.

The first phase of the dedicated bus and taxi lane system was introduced in 2010 and covered over 6km on Al Mankhool Street from Satwa roundabout to Sheikh Rashid Street, and Al Khaleej Street from the intersection with Khalid bin Al Waleed Street up to Al Musalla Street (opposite to the Hyatt Regency Hotel).

The second phase was introduced in 2011, covering parts of Naif Street extending 1km from Al Musalla Street up to Al Khaleej Street.

Transport
EDITOR’S PICKS
UAE holiday dates announced for Eid Al Adha
READ MORE
Another update: Emirates extends suspension of flights from India to UAE
READ MORE
Coming soon: Everything we know about Ain Dubai so far
READ MORE
Khorfakkan set to open new tourist attraction 580 metres above sea level
READ MORE
MOST POPULAR
It's Dhs350 to brunch, stay and play at the What's On Lock In this weekend
Barasti revamps its summer tent with stellar daily drinks deals
Enjoy dinner and a show 68 floors high in Dubai
New films to watch in cinemas this week: July 29 to August 4
16 Abu Dhabi pool pass deals that are so hot, they're cool
9 amazing things to do in Abu Dhabi this weekend: July 29 to 31
YOU SHOULD CHECK OUT
Our website uses cookies and other similar technologies to improve our site and your online experience. By continuing to use our website you consent to cookies being used. Read our privacy policy here.