Seven of the best World Cup fan zones in Dubai

Cheer your team on in the ultimate football-themed atmosphere…

The 2018 FIFA World Cup is in full swing and there is no shortage of venues where you can catch the year’s biggest sporting tournament live as it happens – we should know, we made a massive list of them.

But for every local pub and chic nightclub that’s broadcasting all the games, there’s no better way to really immerse yourself in all the drama and delight of ‘the beautiful game’ than to head down to one of the massive fan zones in Dubai that have been purpose-built for the occasion.

We’re talking about thousands of eager footie fans, jam packed like sardines, cheering and sweating every goal, dive and dodgy referee call. If that sounds like the kind of World Cup experience you want to partake in, then take a look at these six ultimate World Cup fan zones…

With a capacity of more than  2,000 cheering fans, the Atlantis World Cup tent has an electric atmosphere that rivals the stadiums themselves. Split into two zones: ‘The Stadium’ is where  die-hard fans can watch all the action on an enormous 28 sq metre screen, while ‘The Beach’ offers a more chilled out vice complete with casual seating and a PlayStation corner.

Both areas offer a comprehensive licensed F&B menu with stadium-style snacks, hops buckets and drink deals including a wide selection of draught hops, wine and spirits. Fun for fans of all ages, the tent also features a painting station, a state-of-the-art VR football experience and the chance to win  a trip to Russia or the ultimate getaway at Atlantis

Chic Dubai Marina party spot XL Dubai will be broadcasting all the nail-biting action live on two massive screens and six LED screens for unfettered World Cup viewing. While not as large as the other venues in this list, XL Dubai more than makes up for it in atmosphere, letting you blow off steam between halves with DJs, dance shows, drink deals and more.

With BOGO offers available during the breaks, Dhs150 for a buckets of five beers and daily football competitions, you’ll be partying on long after the final whistle is blown.

If you’re looking for ‘big’ then it doesn’t get any bigger than the Superdome at popular beachside bar Barasti. Able to fit up to 8,000 eager footie fans under one electrifying roof, the air-conditioned dome is built across two levels, with fan zones on both the beach and an air-conditioned middle deck.

Entry is completely free and you can bathe in the frenzy of the World Cup atmosphere thanks to giant screens, live DJs and special effects.

What better place is there to watch the year’s biggest sporting tournament than in the heart of Dubai Sports City? Located at The Dome, this fully-licensed football fan park has set up camp for the duration of the tournament broadcasting all the action on three massive screens.

Cheer on your favourite team with other fans in the 21+ main area, or bring the young’uns along to the family friendly area that includes games like giant jenga, foosball and human foosball. Tickets start at Dhs120 per person per match, with table bookings of up to eight people available.

This giant two-storey tent erected bang in the middle of the Emirates Golf Club offers 12 extra-large screens to watch every jaw-dropping free kick and heart wrenching red card in a comfortable air-conditioned setting.

Entry is free with F&B offers starting at just Dhs475 for a four-person snack platter and eight drinks vouchers, while teams of 10 can feast on two snack platters with 20 beverage vouchers. 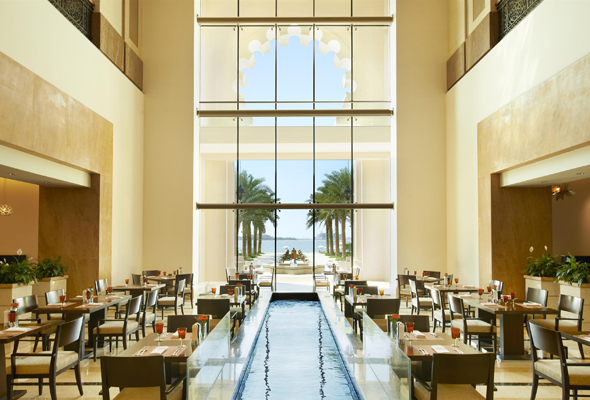 The lavish Fairmont hotel on the Palm is hosting its own dedicated World Cup tent, complete with all the trimmings. Fully air-conditioned with a stocked beverages and bites menu, there’s a giant screen centre stage with multiple TVs dotted about so you never miss any action.

Themed to perfection, expect referee-dressed bartenders, and special offers on food (including nachos and beef sliders) and beverages all night.

Want a 5-star VIP World Cup experience? Then The Penthouse on the rooftop of the stylish FIVE Palm Jumeirah is your best bet. Transformed into a snazzy transparent tent for the tournament, the ultra-chic bar features a full lineup of entertainment including live matches, competitions and pool parties.

Multiple TV screens broadcast every match live as it happens, accompanied by DJs and percussionists for a stadium-like atmosphere.

Bars
Sport & Fitness
EDITOR’S PICKS
Ain Dubai will open with fireworks, live music and a drone show
READ MORE
Incredible Aura SkyPool to open in Palm Tower this November
READ MORE
Brit Grand Slam hero Emma Raducanu confirmed for Mubadala Tennis
READ MORE
What’s On Nightlife Awards 2021: Here are the nominees...
READ MORE
MOST POPULAR
Famed restaurant Ministry of Crab to host a Dubai pop-up from November 3 to 7
O Beach Dubai will no longer be opening on Palm Jumeirah
The most up to date information for entering Abu Dhabi: Oct 2021
First look: Instagram breaking 2D cafe, Forever Rose opens in Yas Mall
Emirates warns passengers to arrive early to DXB airport this weekend
YOU SHOULD CHECK OUT
Our website uses cookies and other similar technologies to improve our site and your online experience. By continuing to use our website you consent to cookies being used. Read our privacy policy here.