She visited La Perle at Al Habtoor City whilst in town…

Dubai plays host to all kinds of famous international guests on a regular basis, but the city’s latest high-profile visitor has to be one of our favourites so far.

The world’s youngest Nobel Peace Prize recipient has only been active on Instagram for two weeks but has clearly taken to the platform, sharing clips of some of the show’s more incredible moments and commenting on how daring the performers were.

It was an honour to have been visited by Pakistani activist and Nobel Prize winner, Malala Yousafzai this past weekend. @Malala, thank you very much for coming to watch our show, we hope it wasn’t “too scary!” ☺ We can’t wait to welcome you again soon. #laperledxb #AlHabtoorGroup #Dragone #AlHabtoorCity #MyDubai

The venue responded in kind, thanking Malala on the official La Perle Instagram for attending the show and saying it was an honour to be visited by her.

It’s currently unclear what Malala is doing in Dubai, however she did post a photo of the JW Marriott Marquis hotel which may give a hint as to the area of town she might be staying in. 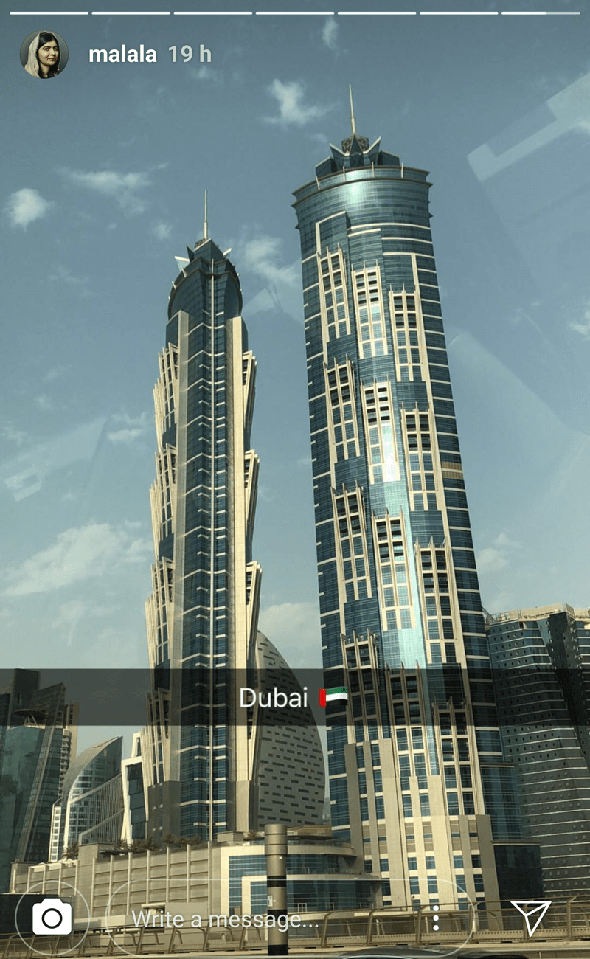 In 2012, Yousafzai suffered an assassination attempt on her life by members of the Taliban for speaking out about girls’ education rights in her native Pakistan. She has since gone on to inspire many thousands of people around the world with her story and was awarded the Nobel Peace Prize in 2014.

She is currently enrolled at the University of Oxford, and is clearly taking some time off to enjoy the Dubai summer sun. Happy travels, Malala!

News
EDITOR’S PICKS
UAE holiday dates announced for Eid Al Adha
READ MORE
Another update: Emirates extends suspension of flights from India to UAE
READ MORE
Coming soon: Everything we know about Ain Dubai so far
READ MORE
Khorfakkan set to open new tourist attraction 580 metres above sea level
READ MORE
MOST POPULAR
Another update: Emirates extends suspension of flights from India to UAE
So, when is the next UAE public holiday in 2021?
Sign your kids up for a five-day theatre camp at The Junction this summer
Pics of the week: Your best photos of the UAE
New films to watch in cinemas this week: July 22 to 28
YOU SHOULD CHECK OUT
Our website uses cookies and other similar technologies to improve our site and your online experience. By continuing to use our website you consent to cookies being used. Read our privacy policy here.