It beat out other major international capitals including Paris, Sydney and Tokyo

A new study has ranked Dubai amongst the top 10 most attractive cities in the world for expatriates looking to work abroad.

The Decoding Global Talent 2018 study, conducted by The Boston Consulting Group and The Network placed the emirate sixth, with up to 12 per cent of those who took the survey willing to make the move to Dubai for work. This put it only marginally behind other major capitals in the top 5 including Barcelona, Berlin and Amsterdam.

The top two spots were nabbed by London and New York, respectively, while Dubai has jumped up five places when compared to a similar study conducted in 2014, reports Gulf Business. 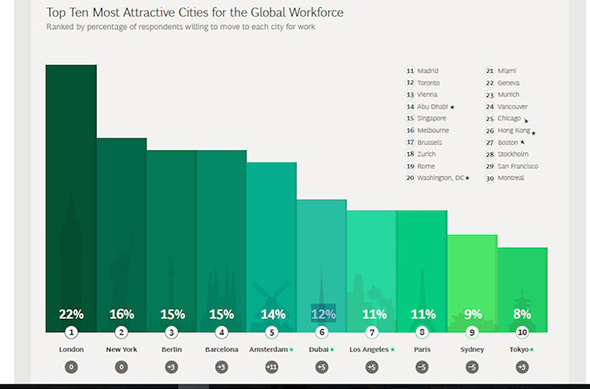 Overall, the study found that 57 per cent of all workers surveyed were open to moving to a different country for employment purposes.

While it’s no shocker to see Dubai placing so high – the emirate is both a great place to live and work – it’s telling that the only other city in the GCC to crack the top 30 was the UAE’s capital Abu Dhabi.