As far as unconventional marriage proposals go, this one ranks up there…

There are any number of things one expects to be after travelling down the world’s longest zipline in Ras Al Khaimah – thrilled, exhilarated and maybe just a little terrified – but ‘proposed to’ probably isn’t one of them.

But a marriage proposal is exactly what greated Susan Kuruvilla from India over the weekend, as her boyfriend, Adrian MacKay, popped the question immediately after she completed her run on the 2.83km-long zipline. 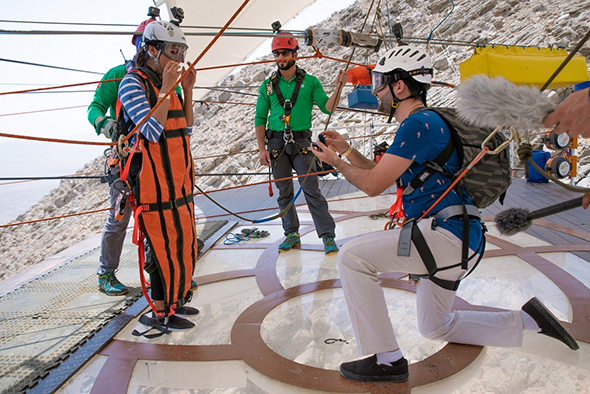 Adrian had organised the proposal with the help of the Ras Al Khaimah Tourism Development Authority and Toro Verde UAE, who arranged for a large banner displaying the words “Will you marry me?” on the side of the mountain so that Susan might have an inkling of what was about to go down as she approached the landing platform suspended high up on Jebel Jais, the UAE’s tallest mountain.

The couple are the first to propose on the popular RAK attraction that since opening to the public in February has welcomed over 10,000 visitors.

Oh, but did she say yes? You’ll have to watch the video below to find out…

When romance and adventure come together!
Check out the video for a one of a kind proposal on top of Jebel Jais…
Would you say YES?#VisitRasAlKhaimah #RAKRomance #JebelJais #Proposal #CoupleGoalshttps://t.co/11XKwuI0tm pic.twitter.com/z0iayDjQSu

Sport & Fitness
EDITOR’S PICKS
Ramadan in Dubai: 48 iftars to try
READ MORE
Where can Dubai residents travel? Check out these 14 destinations
READ MORE
Rumours, facts and reveals: New Abu Dhabi bars and restaurants
READ MORE
UAE announces reduced working hours for Ramadan 2021
READ MORE
MOST POPULAR
A stunning new mangrove forest has opened in Dubai
Dubai clarifies rules surrounding dining outdoors in Ramadan
Abu Dhabi Police warns public not to fall for beggar tricks
Splash around with these summer deals at waterparks in Dubai
New vegan menus, desserts and restaurants in Dubai to try
YOU SHOULD CHECK OUT
Our website uses cookies and other similar technologies to improve our site and your online experience. By continuing to use our website you consent to cookies being used. Read our privacy policy here.