This is huge news for anyone who enjoys gaming online…

Anyone who enjoys playing video games online will tell you that one of the key components to a fun experience is the ability to communicate effectively with other gamers.

This has proved to be tricky for many UAE gamers, however, as local telco Du has blocked the use of in-game voice chat for many of the hobby’s most popular titles.

Thankfully, it seems that Du has seen the error of their ways and, via an announcement on their community forums, has revealed that the restriction on the in-game chat feature has been lifted for the following games: Fortnite, Player Unknown’s BattleGround, Overwatch, Destiny, Strike of King, League of Legends, Evony and Respanable. 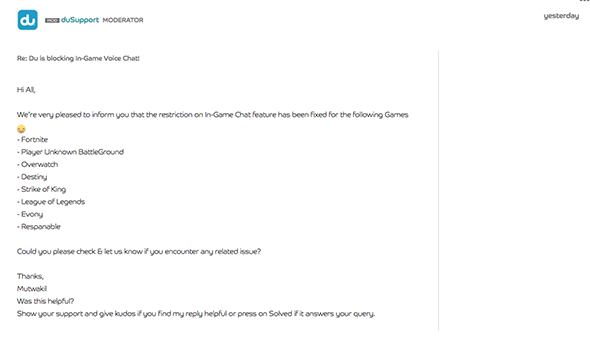 This will come as a huge relief to gamers who have, up until now, had to resort to various kinds of hacks and alternatives to be able to communicate while playing, many of which offer a sub-par experience to dedicated in-game voice chat.

In the the comments following the announcement players are reporting that the block has been lifted on many of the games listed for both PC and PlayStation 4, with some teething issues still present on others.

Either way, sounds like it’s time to fire up the console and get in a spot of gaming this weekend.

Tech
EDITOR’S PICKS
UAE holiday dates announced for Eid Al Adha
READ MORE
Another update: Emirates extends suspension of flights from India to UAE
READ MORE
Coming soon: Everything we know about Ain Dubai so far
READ MORE
Khorfakkan set to open new tourist attraction 580 metres above sea level
READ MORE
MOST POPULAR
A new upscale Chinese restaurant with karaoke is opening in Dubai
Feast on the best unlimited chicken wing deals in Dubai
It's Dhs350 to brunch, stay and play at the What's On Lock In this weekend
6 great things to do in Abu Dhabi this week: July 25 to 28
6 fun things to do in Dubai this week: July 25 to 28
YOU SHOULD CHECK OUT
Our website uses cookies and other similar technologies to improve our site and your online experience. By continuing to use our website you consent to cookies being used. Read our privacy policy here.