Go green in Abu Dhabi: the hotels and restaurants banning plastic and so much more

Want to live a more eco-friendly life in the capital? Many of the city’s outlets are ditching plastic straws and paper to help the environment. Here’s where you can dine and stay with a clear conscience 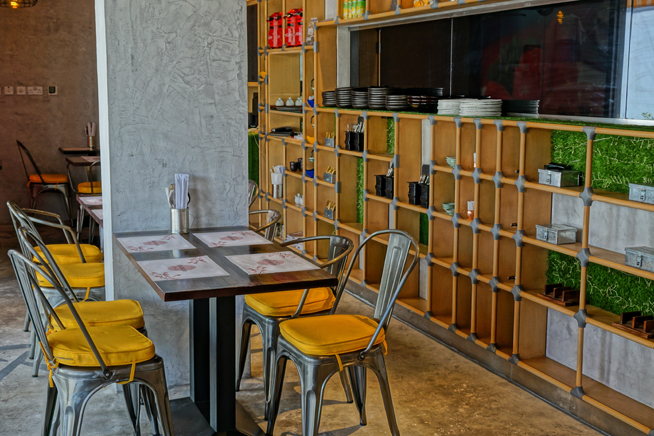 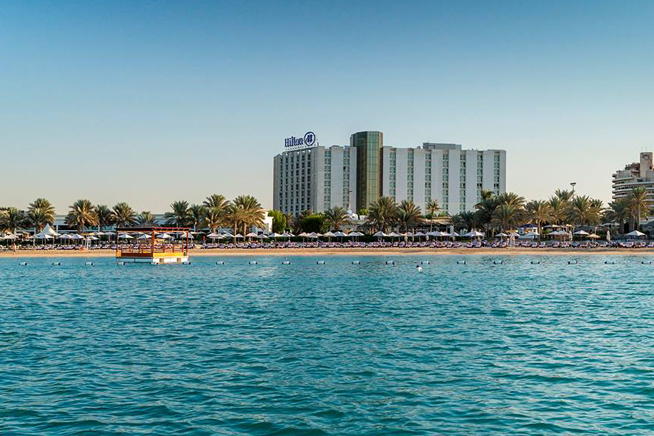 The hotel’s staff saved more than 250 gallons of water as part of a month-long initiative to reduce water waste during March and April this year. Water metres monitored water usage throughout the hotel and staff were trained on water-saving techniques. What’s more, the hotel is planning to end the use of plastic straws and only offer biodegradable paper ones by August 15. Plastic cups and paper cups will be discontinued and replaced with ceramic mugs and a stainless steel water dispenser will be introduced to replace the plastic water gallon.
Hilton Abu Dhabi, Corniche, Al Khubeirah, Abu Dhabi. Tel: (02) 6811900. Taxi: Hilton. hilton.com 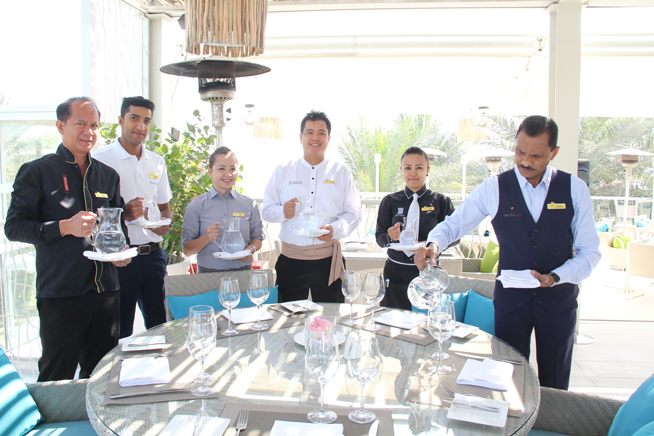 The British club near Mina Port has removed all plastic glasses and replaced them with compostable corn starch cups and has also binned all plastic straws. It’s also launched a “water by the jug” initiative this year across its 13 food and beverage outlets. Guests are encouraged to opt for a jug of water instead of plastic bottles and since March, over 2,000 litre jugs have been served. In the forthcoming months, it will be replacing its one-use cutlery with compostable corn starch equivalents.
The Club, Mina Port, Abu Dhabi, timings vary. Taxi: The Club, Mina. Tel: (02) 6731111. the-club.com 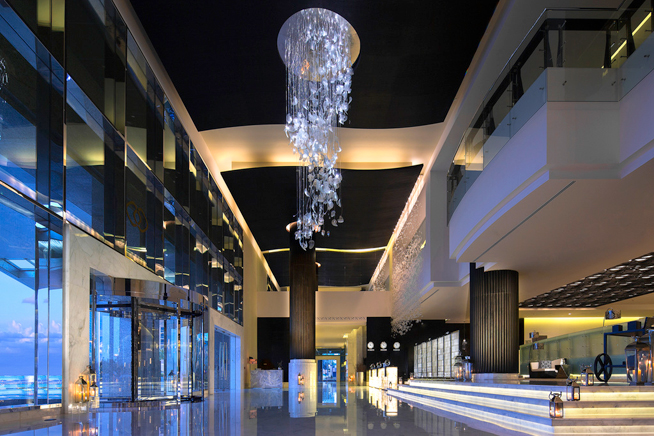 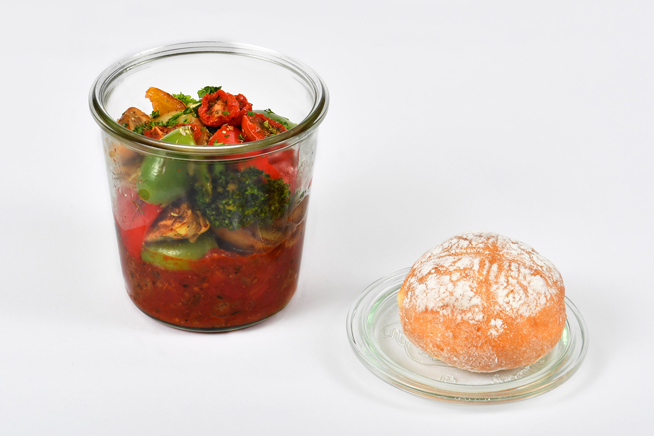 You won’t find plastic at healthy food restaurant Skinny Genie. Opened in October last year, the straws are paper and drinks are served in glass jars. Even the takeaways keep up with this theme – containers are made from 100 per cent glass, whether they’re ordered in store or for delivery. If you’re making a purchase, expect reusable cotton bags instead of plastic. In the future Skinny Genie is planning to stop using straws entirely.
Masdar City, Abu Dhabi. Taxi: Masdar City. Tel: (02) 5555897. skinny-genie.com 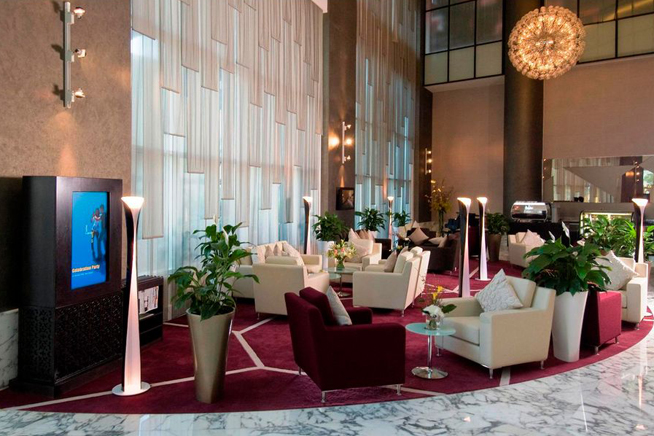 The hotel has an ongoing commitment to reducing waste reduction and encourage recycling. In 2017, it shrunk waste by 43 per cent and increased recycling by 17.5 per cent thanks to the introduction of separate collection bins on each floor, kitchens, food and beverage outlets and garbage rooms. The hotel has also started to replace plastic straws with paper ones since July 1.
Grand Millennium Al Wahda, Al Wahda, Abu Dhabi. Tel: (02) 4953916. Taxi: Grand Millennium. millenniumhotels.com 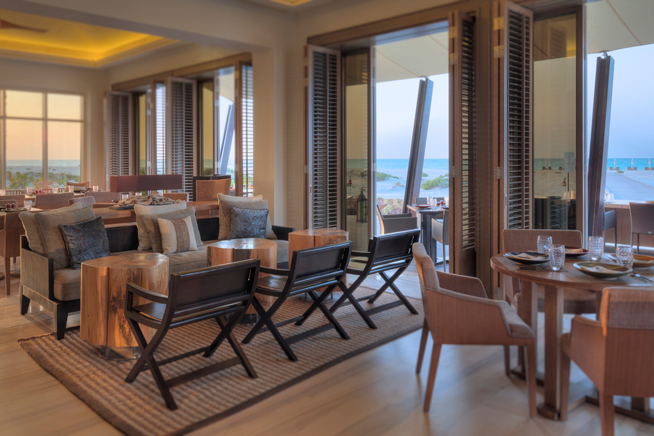 From September 1, the hotel on Saadiyat will be going more eco-friendly – it will be moving away from single-use plastics and straws will only be available on request.
Park Hyatt Abu Dhabi Hotel & Villas, Saadiyat Island, Abu Dhabi. Tel: (02) 4071234. Taxi: Park Hyatt Saadiyat. abudhabi.park.
hyatt.com 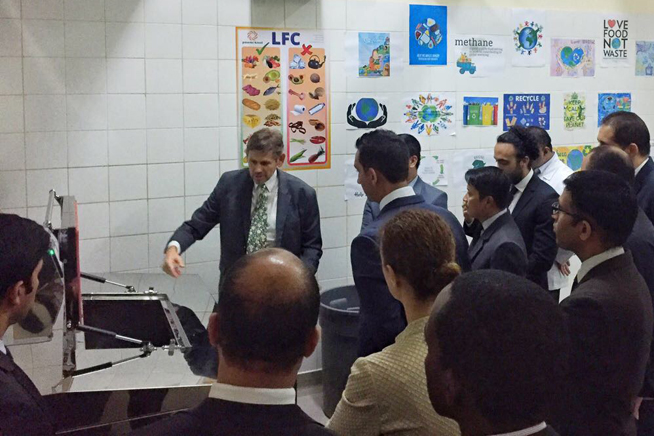 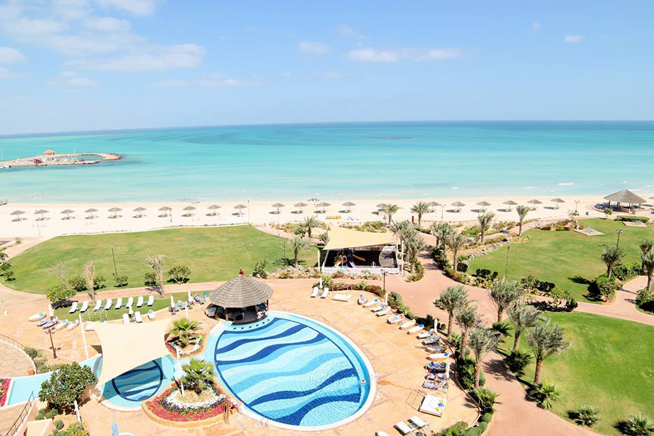 Food wastage in restaurants is a hot topic in the UAE (particularly with regards to all that unwanted food at brunch buffets), but the Danat Jebel Dhanna Resort has found a way to recycle those leftovers – it uses a decomposing machine so food waste is recycled as fertiliser to use for the resort’s organic vegetable farm. The resort has also installed LED bulbs that led to a reduction in energy consumption by 25 per cent and is planning to plant more trees in the resort’s grounds in the future.
Danat Jebel Dhanna Resort, Ruwais, Abu Dhabi. Tel: (02) 8012222. Taxi: Danat Jebel Dhanna, Western Region. danathotels.com 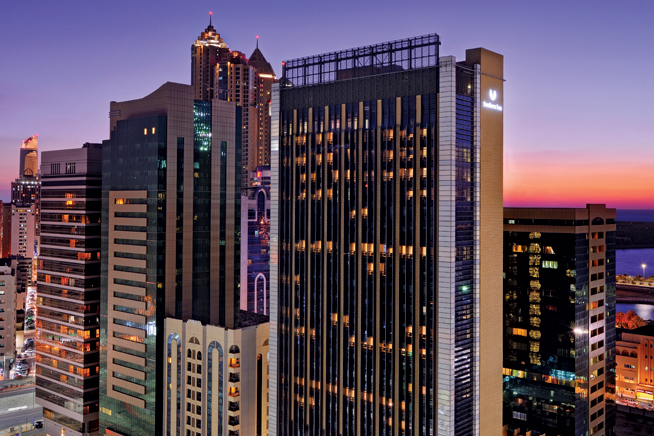 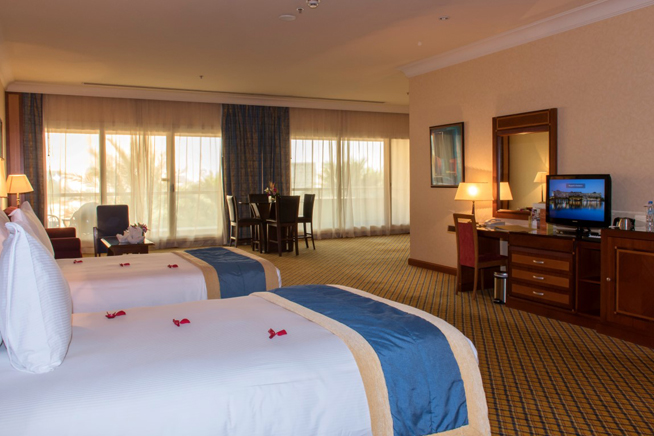 Paper is being left firmly in the past at Al Raha Beach Hotel – expect everything to be digital. Guests can access room service menus or guest directories through televisions and guest comments and surveys are taken through iPads. Al Raha is planning to go paperless throughout the whole resort in the forthcoming months.
Al Raha Beach Hotel, Al Raha, Abu Dhabi. Tel: (02) 5080555. Taxi: Al Raha Beach Hotel. alrahabeach.danathotels.com 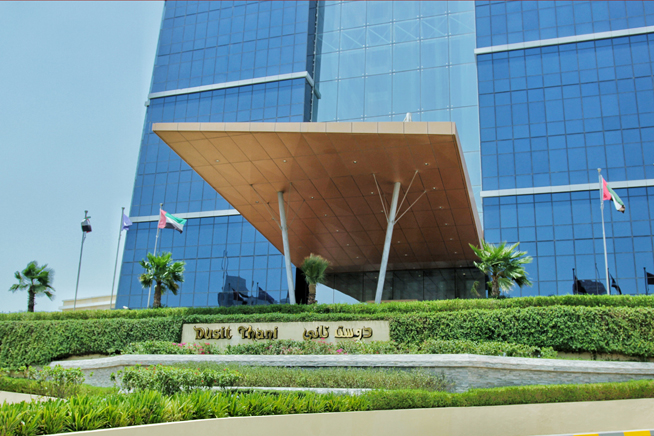 Abu Dhabi’s Thai hotel has introduced energy saving LED lights in over 500 guestrooms, while its lobby water fountain was converted to a garden landscape in 2017, saving approximately 100,000 litres of water. The hotel has an ongoing commitment to reduce food waste following a pilot project in the hotel’s café since June this year. Large food bins are replaced with small bowls at the dumping stations and has since reduced monthly food waste in its staff café by 450kgs per month.
Dusit Thani, Al Nahyan, Abu Dhabi. Tel: (02) 6988137. Taxi: Dusit Thani. dusit.com 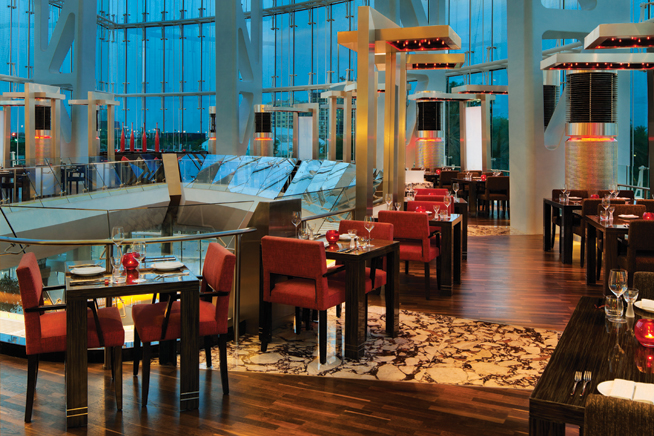 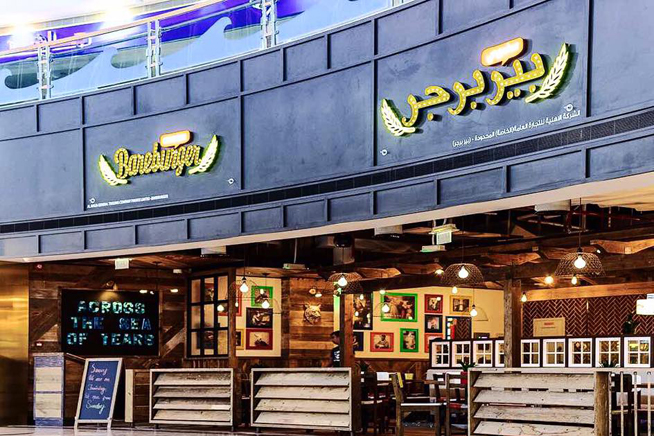 Bareburger isn’t just home to hefty patties – the restaurant’s floors, ceilings and wall coverings and furniture are made from sustainable or recycled materials.
Marina Mall, Breakwater, Abu Dhabi, Sat to Wed 10am to 11pm, Thur to Fri, 10am to 12pm. Tel: (02) 4411723. Taxi: Marina Mall. bareburger.com 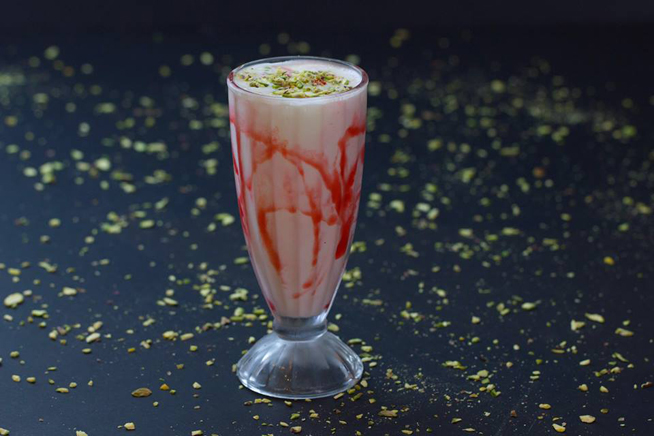 The Indian restaurant in Al Zahiyah is somewhat of an authority when it comes to Indian sweets. The outlet, which have cut down single-use plastic cutlery and straws, have also got their staff involved. Service and delivery staff will be wearing a badge as a symbol of going green to encourage diners to reduce their plastic use.
Al Zahiyah, Abu Dhabi, daily 9am to 11.30pm. Tel: (02) 6503666. Taxi: between Salam Street and Najda Street, near Adnoc 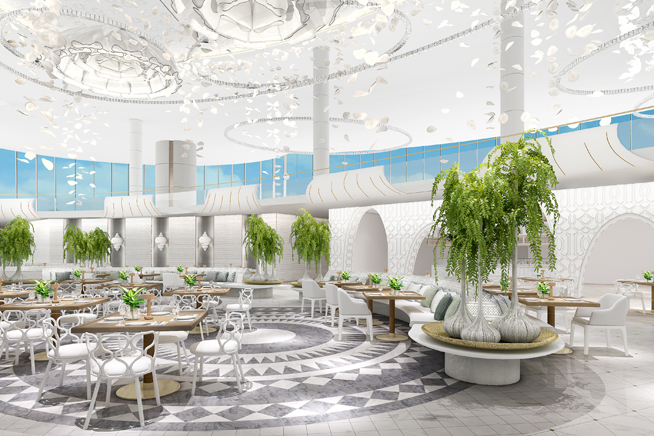 The hotel may seem like any other luxury resort but there will be no plastic allowed here. Instead, Jumeirah At Saadiyat Island Resort, opening in November this year, will be offering reusable plastic bottles at check-in for all guests and have refillable water stations located around the hotel. The idea is to prevent plastic harming Saadiyat Beach’s native flora and fauna and endangered local residents, the hawksbill turtles. The resort will also have an outright ban on plastic straws, and is aiming to reduce paper wastage (plans include silicone coasters instead of paper ones) and will also use solar power.
jumeirah.com 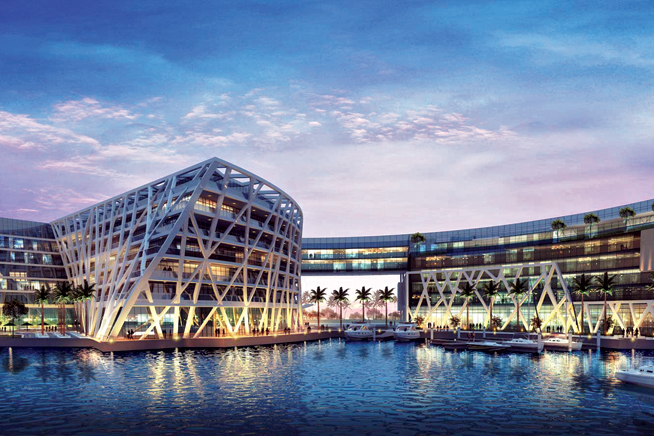 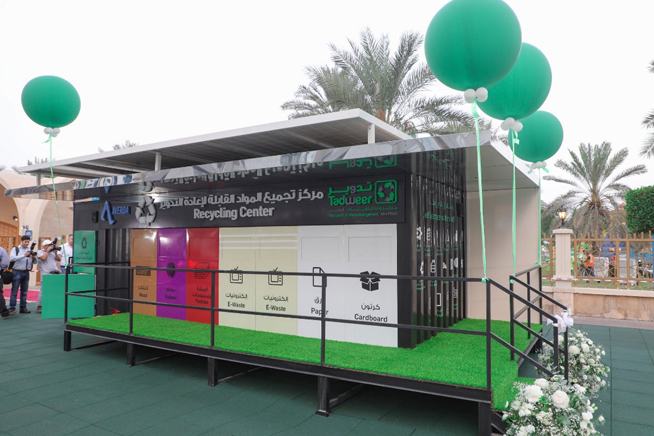 Separating recyclables in the city will be easier thanks to a series of new recycling stations that have been launched by Abu Dhabi Municipality. Following a successful two-month trial at the entrance of Khalidiyah Park, wood, carboard, mobile phones, used batteries, plastic, wool, metal and cotton will have their own sections, as will clear and coloured glass. In total, there will be 16 stations all over the city.– For more about Abu Dhabi straight to your newsfeed, follow us on Facebook.

News
EDITOR’S PICKS
So, when is the next UAE public holiday in 2021?
READ MORE
All of the lavish new hotels set to open in Dubai in 2021
READ MORE
16 of the best pool passes in Dubai that are fully redeemable
READ MORE
All of the restaurants at West Beach, Palm Jumeirah
READ MORE
MOST POPULAR
Emirates ID now proves vaccination and PCR results at DXB airport
Abu Dhabi tourists can now get free vaccines through SEHA
Before and after: Stunning photos capture Dubai’s incredible transformation
Etihad wins Best Cabin Crew and Frequent Flyer Programme awards
Flash sale: This Dubai hotel has 40 per cent off and free attraction tickets
YOU SHOULD CHECK OUT
Our website uses cookies and other similar technologies to improve our site and your online experience. By continuing to use our website you consent to cookies being used. Read our privacy policy here.