Famous New York burgers and shakes arrive in the capital.

The phrase “Instagram-worthy food” is an overused cliche, but if there’s one time when you’re allowed to use it, it’s during a visit to Black Tap. The American burger chain from New York is famous for its Crazy Shakes that look like a concoction from Charlie and the Chocolate Factory.

Black Tap has several venues in New York, one in Vegas, a couple up the road in Dubai and one in Kuwait, and now Abu Dhabi has its first branch – you’ll find it in Yas Mall right next to Ferrari World.

The decor is pretty straightforward – black dominates, with exposed pipes smothering the ceiling and black walls, although a giant graffiti boom box mural adds some colour. The atmosphere in here is neat – staff are jovial and the stereo plays classic hip hop, such as NWA. 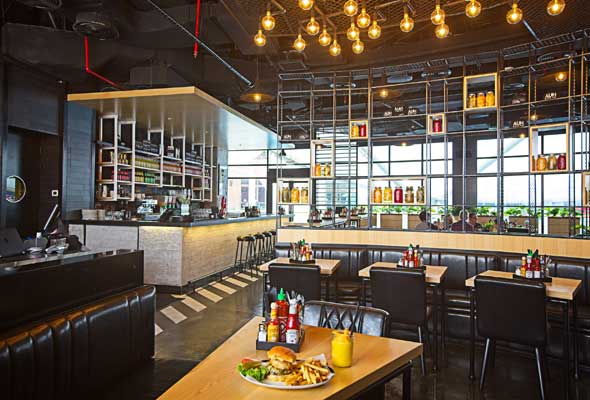 Unlike other branches, it’s not licensed – so if you want to try Black Tap’s craft beers, you’ll have to travel to Dubai. They do serve Mexican sodas alongside the menu of burgers, fried chicken platters and salads, plus those infamous shakes.

One thing Black Tap does do well is a burger. The Texan, with cheddar cheese, an onion ring, beef bacon and barbecue sauce was a good start to proceedings. There’s nothing clever about it, but it was well executed (although we would recommend ditching the stringy and chewy bacon). 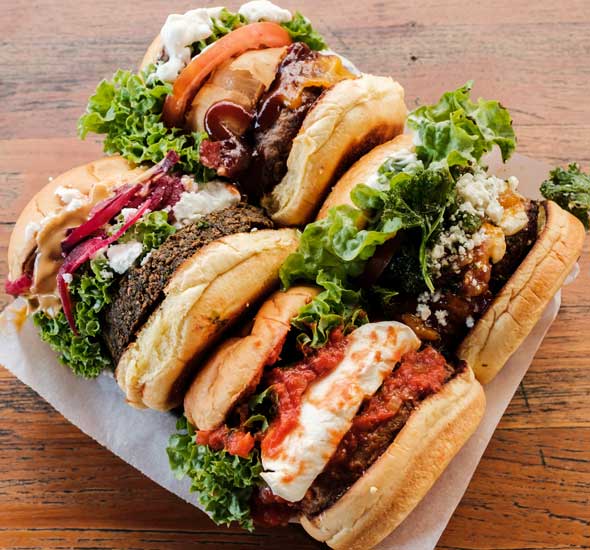 Black Tap also does an excellent vegan burger with a black bean patty with salsa verde and cilantro – it came with a little kick of spice and the beans dominated the taste in a good way.

A portion of guac and chips fell flat though – pickled onion and vinegarette were added and made for a tart, almost medical taste that was rejected by What’s On after one small bite.

The burgers are big enough to leave you with a full belly, but they are nothing compared to the main event – the Crazy Shakes, which we’re told have between 1,000 and 1,800 calories in them. These concoctions have gained the brand cult status, and they also tasted pretty good during our visit. 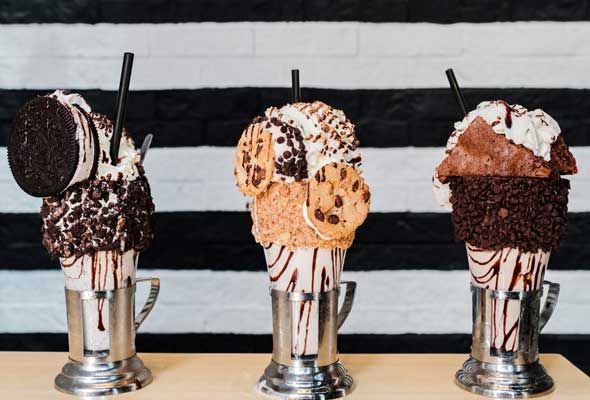 The Sweet N’ Salty is a peanut butter shake that comes with pretzel sticks, whipped cream, M&Ms stuck around the rim of the glass and peanut butter chocolates as well. It somehow managed to not be too sickly although kudos to anyone who can finish it all.

Same goes for the Cookies N’ Cream Surprise – a colossal take on a classic Oreo milkshake. The taste won’t surprise, but the presentation makes it special.

The staff are cheery but flighty – they don’t always listen and need to pay more attention when taking orders. Our meat eater ordered sweet potato fries, our veggie ordered normal fries, yet they were served on the wrong plates – a big issue for a veggie who doesn’t want fries piled next to a burger patty.

Overall though, it’s a fun place to visit if you’re up for a very indulgent cheat day.

Eat & Drink
Restaurants
EDITOR’S PICKS
Ain Dubai will open with fireworks, live music and a drone show
READ MORE
Incredible Aura SkyPool to open in Palm Tower this November
READ MORE
Brit Grand Slam hero Emma Raducanu confirmed for Mubadala Tennis
READ MORE
What’s On Nightlife Awards 2021: Here are the nominees...
READ MORE
MOST POPULAR
Why Armani/Hashi is trending hard on the Japanese cuisine scene
Celebrate creativity at City Walk during this three-weekend event
This Heinz Beck brunch at Waldorf Astoria just got an upgrade
10 brilliant things to do in Abu Dhabi this long weekend: Oct 21 to 23
Experience Arabesque elegance at Asil's Saturday lunch
YOU SHOULD CHECK OUT
Our website uses cookies and other similar technologies to improve our site and your online experience. By continuing to use our website you consent to cookies being used. Read our privacy policy here.