Nusret Gökçe, aka Salt Bae, is one of the most famous internet sensations out there.

After going viral with that salt-sprinkling meme, the steakhouse chef has become legendary for the masterful manner in which he carves meat and fantastical way in which he sprinkles the salt afterwards. It has earned Salt Bae legions of fans, not to mention 15.3 million followers on Instagram.

And currently, the Turkish chef is back to check on his UAE restaurants (he has outposts in both Abu Dhabi and Dubai).

But he’s been sure to make the most of seeing the sights – and attending to his ‘gram game. Teaming up with another Dubai icon, the Burj Khalifa, he shared this iconic salt-sprinkling snap to his Instagram:

But it’s not been all fun and games for the superstar chef. He’s been back to work at his Dubai steakhouse Nusr-Et, and has already welcomed a very special visitor.

We wonder what those two discussed? 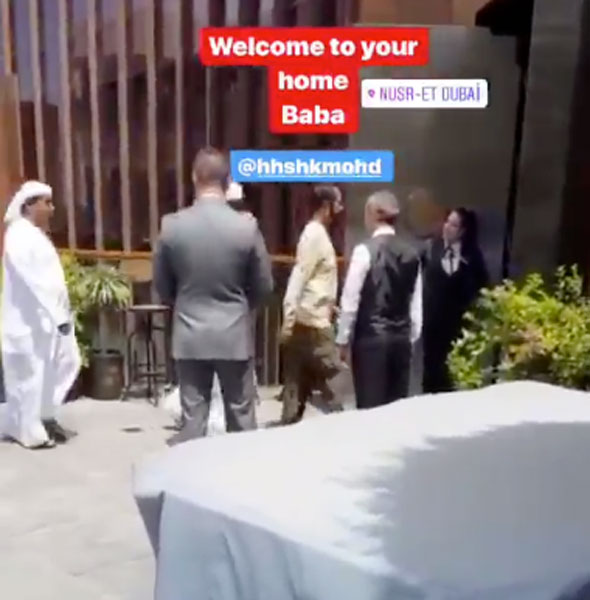 Later in the evening, Salt Bae was back in the kitchen, posing up a storm with delighted diners and finishing their steaks with the iconic Salt Bae sprinkle.

Although we’re not sure how long the chef will be in town, we hope it’s long enough for us to go and snap that Salt Bae selfie…

Eat & Drink
News
EDITOR’S PICKS
UAE holiday dates announced for Eid Al Adha
READ MORE
Emirates extends suspension of flights from India to UAE again
READ MORE
Coming soon: Everything we know about Ain Dubai so far
READ MORE
Khorfakkan set to open new tourist attraction 580 metres above sea level
READ MORE
MOST POPULAR
A completely spoiler-free movie review of The Suicide Squad
Review: It's chilled vibes all the way at Jumeirah Islands Clubhouse
Review: Carna Dubai, a vibrant steakhouse 74-storeys high
Pics of the week: Your best photos of the UAE
New films to watch in cinemas this week: August 5 to 11
YOU SHOULD CHECK OUT
Our website uses cookies and other similar technologies to improve our site and your online experience. By continuing to use our website you consent to cookies being used. Read our privacy policy here.