Temperatures in Dubai to reach 45 degrees over Eid holidays

Prepare yourselves for another hot weekend in the city…

If you’re staying in Dubai, brace yourselves for another hot and hazy weekend.

According to the National Centre of Meteorology (NCM), temperatures on the costal areas of the UAE (covering Dubai, Abu Dhabi and Sharjah) are set to reach 45 degrees over the next couple of days in Dubai.

The NCM has also outlined that some light to moderate winds may cause blowing dust at times, so be careful if you’re outside over the next few days.

If you’re making plans into the weekend, here’s the five-day weather forecast: 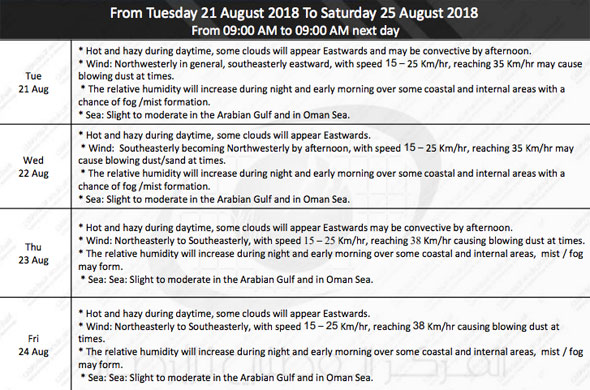 But it’s not all bad news.

Humidity levels are currently recording at between 50 and 65 per cent in Dubai with it increasing at night time, which isn’t half as bad as the 100 per cent humidity recently felt in the UAE.

There is some good news to look forward to, as the end of summer is on the horizon. According to astronomers, the date marking the start of summer drawing to a close is this weekend.

Speaking to Gulf News, Ebrahim Al Jarwan, General Supervisor of Sharjah Planetarium, said that the appearance of the Suhail star, one of the brightest stars in the Vela constellation, is anticipated on August 24, which signals that the summer is beginning to draw to a close.

Dubai residents should be able to see the Suhail star, also known as Lambda Velorum, rising just above the southern horizon from August 24. It will continue to shine until late winter in the Arabian Peninsula.