Abu Dhabi bucket list: 30 things you have to try in the city

Whether you’ve just arrived in the nation’s capital or have been here forever, here’s how to enjoy everything Abu Dhabi has to offer…

1. Make a splash at Yas Waterworld 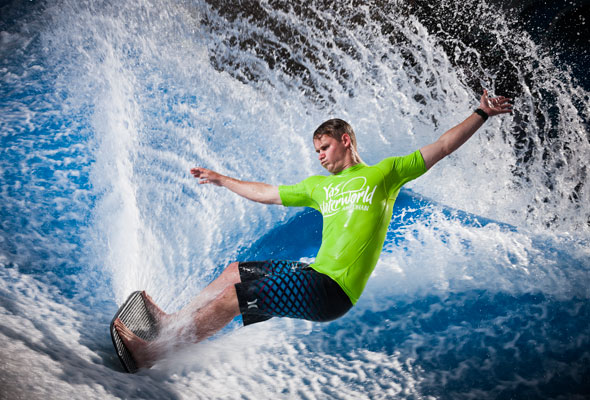 There are 40 rides waiting for you at Yas Island’s aqua park, and new for 2018 is Cinesplash, the region’s first ever water cinema. Legend of the Lost Pearl is a 5D movie experience that will see you in a theatre that floods with water up to your knees, plus there are water explosions, moving seats and more. 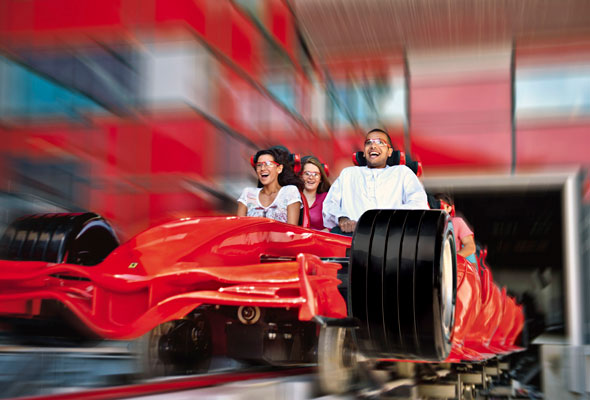 There are many reasons to visit Ferrari World on Yas Island, but Formula Rossa has to be the biggest – get ready to scream on a rollercoaster that reaches a jaw-dropping 240kph in just 4.9 seconds. 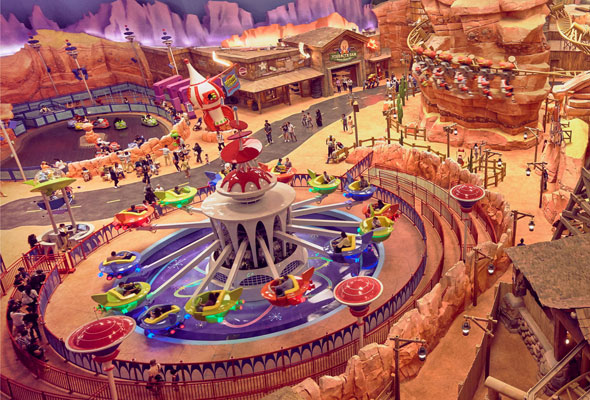 The city’s newest theme park only opened this July but is already a must-see attraction – inside Warner Bros. World Abu Dhabi are 29 rides for thrill seekers, plus a variety of characters such as that legendary rabbit, as well as The Flinstones, Scooby Doo, Wonder Woman, The Joker and Batman. They all live in six zones, including DC Comics’ Gotham City and the desert world of Dynamite Gulch, home to the likes of Yosemite Sam. 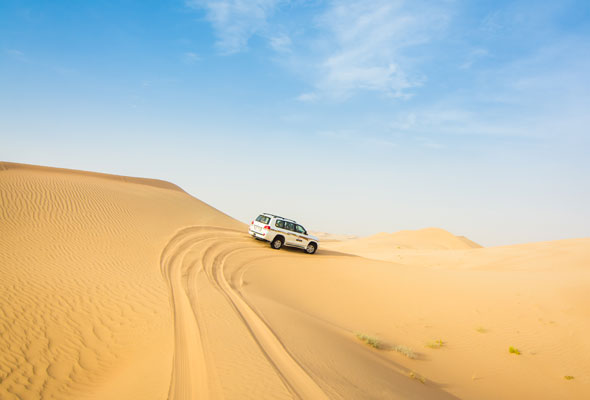 Al Khatem is just a 45-minute drive from Abu Dhabi down Al Ain Road, and here you’ll find loads of sand dunes. And they’re perfect for driving SUVs and buggies up and down. Abu Dhabi Desert Safari hosts morning and evening trips, plus overnight safari trips where you can camp Bedouin-style. 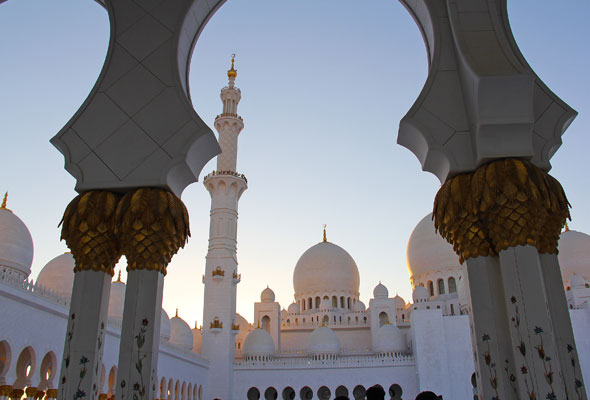 6. See into the future at Masdar 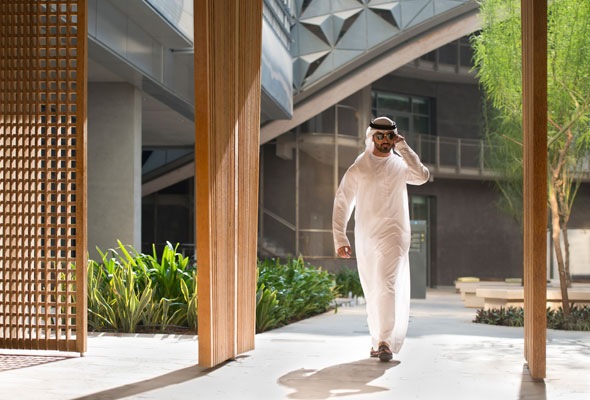 Abu Dhabi’s futuristic city near the airport is a renewables and sustainable energy hub, complete with driverless cars, a wind tower to regulate the temperature, and some smart restaurants such as Jim’s Kitchen Table. They’re opening a mall here soon, too. 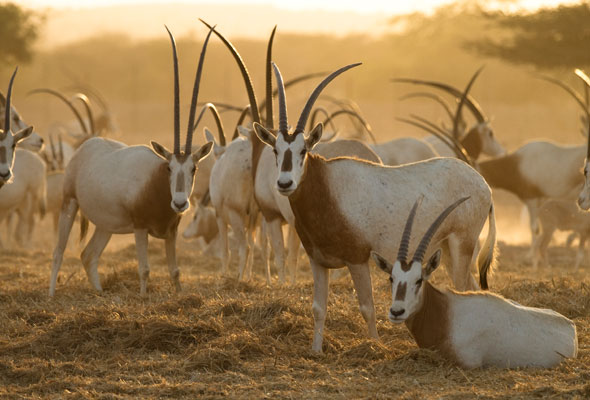 It’s a wildlife reserve, a luxury holiday resort, an adventure playground and so much more. You’ll find it in Abu Dhabi’s western region, and the island has several five-star hotels, historical sites, and more than 13,000 animals including Arabian Oryx, gazelles, giraffes, hyenas and cheetahs. You can also try mountain biking, archery, kayaking and more. 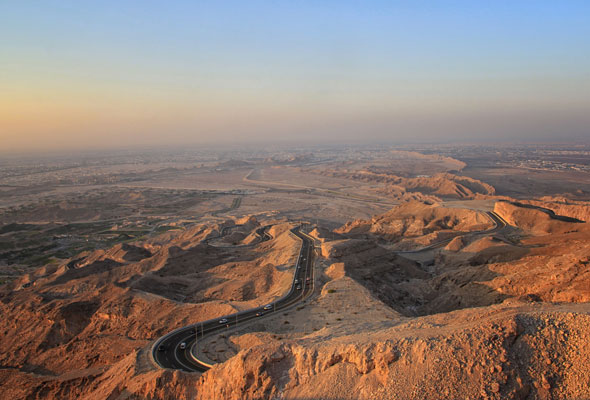 Abu Dhabi’s highest peak at 1,240 metres, you’ll find the “empty mountain” as it’s called in Arabic in Al Ain. Its winding turns make it a great road to drive up. At its base are ancient burial tombs that date back an incredible 5,000 years. 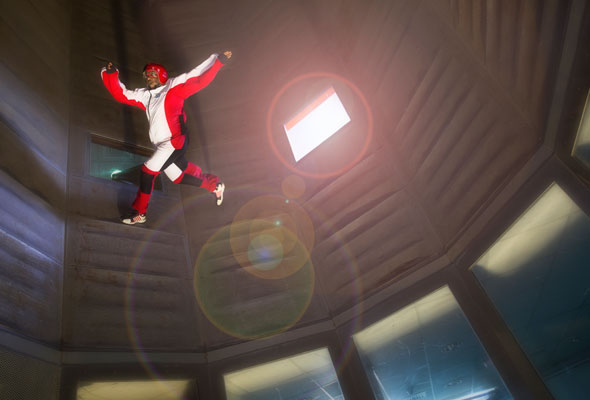 Yes, you read that right. You can actually float at Spacewalk, Abu Dhabi Country Club’s indoor skydiving centre, where you’ll be pushed off the ground by a maximum wind speed of 160kph. There’s a weight limit of 85kg. 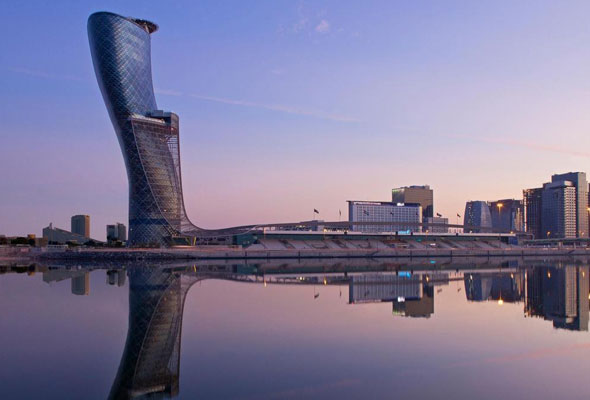 You’ll know it as the Hyatt Capital Gate, but from later this year it’ll become the Andaz Capital Gate. Andaz means “personal style” in Hindi and the reboot will transform it into a boutique-style hotel. One thing won’t change, though – it’s still the world’s furthest man-made leaning building, with an 18-degree incline.

11. Tuck into a gold camel burger 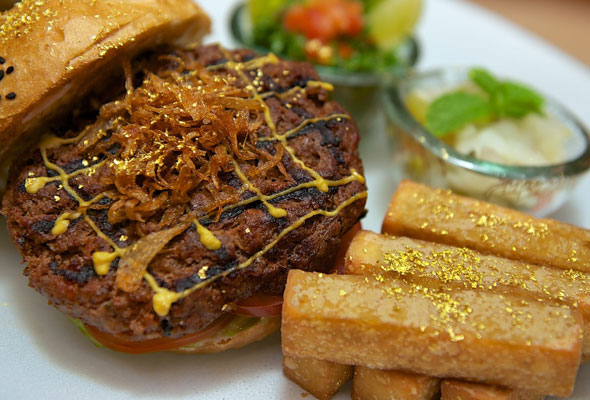 You won’t be asked if you want one hump or two, but did you know our dromedary friends have many uses, including giving milk? Unfortunately for them, they are very tasty as well. Le Cafe at Emirates Palace’s signature burger features meat from a camel raised in Al Ain, grilled aubergine and halloumi and a bun covered in 23-karat gold flakes. 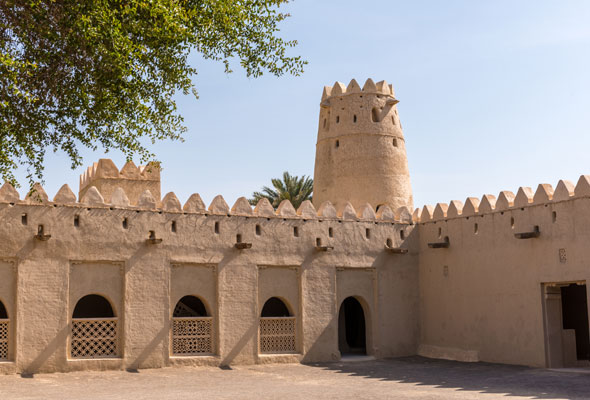 Visit one of the largest forts in the UAE in the garden city of Al Ain, which was built to defend the city and made with natural climate-controlled mud brick. Work started on it back in 1891, finished in 1898, and it was regularly visited during summer months by Abu Dhabi’s Al Nahyan ruling family.

13. Eat in a revolving restaurant 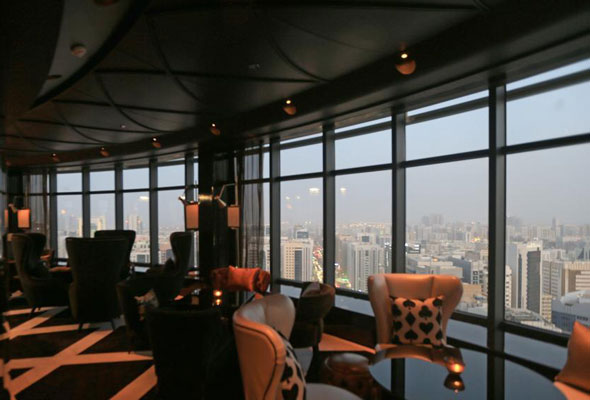 Stratos is the name of Le Royal Meridien’s revolving rooftop restaurant that serves spectacular views of Abu Dhabi as well as good food. The grilled octopus with hazelnuts and the braised short ribs come with the What’s On seal of approval. 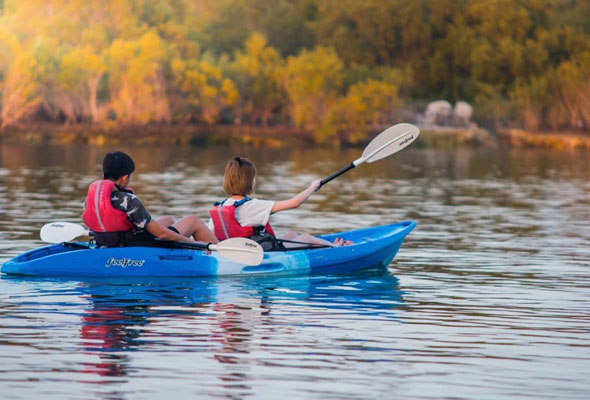 Abu Dhabi’s mangroves offer the chance to get up close and personal with some local wildlife, while getting some exercise at the same time. Sea Hawk Water Sports offer trips that last about two hours. 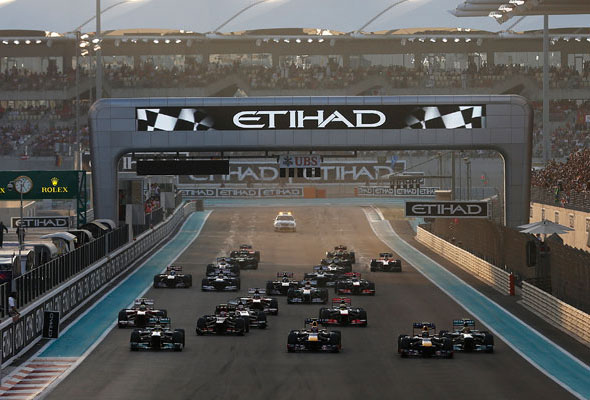 This year marks the 10th anniversary of race weekend in the capital, and as well as the fast cars, there’s music headliners including British popstar Sam Smith and US rockers Guns ‘N Roses. Buy a ticket to watch the action on the track for access to all the gigs at the du Arena.

16. Get fit at a Formula One track 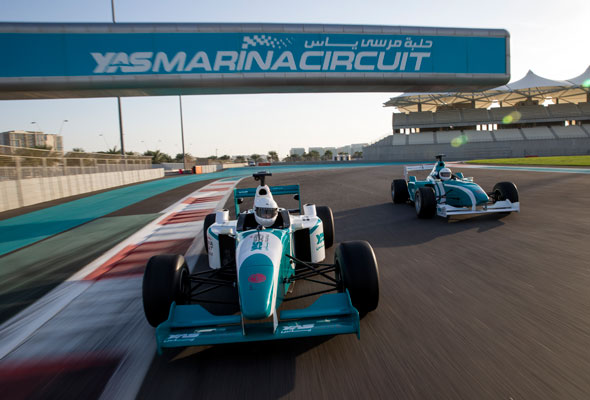 There’s not many places in the world where you can run and cycle around a Formula One track, but you can in the capital. TrainYas sessions run Sunday nights, Tuesdays and on Wednesdays (the latter being ladies only). You can rent a bike and helmet and free water top-ups are also provided.

17. Take afternoon tea in the sky 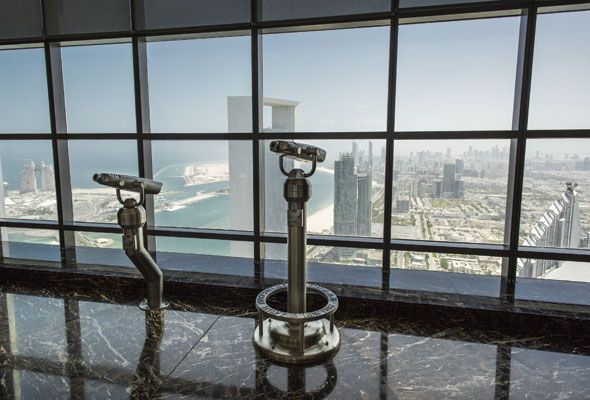 Perhaps the most decadent way to enjoy some scones and sarnies in the capital is on the 74th floor of Jumeirah At Etihad Towers. The Observation Deck also offers 360-degree views of the city skyline. 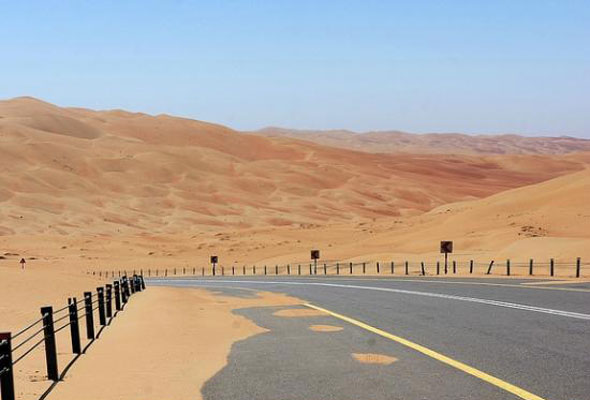 Liwa’s Tal Moreeb dune isn’t actually that scary, even if it goes by the name “scary mountain” – in fact, the world’s tallest sand dune looks pretty spectacular and is home to events such as the Liwa Sports Festival. Camping on the dunes is also recommended. 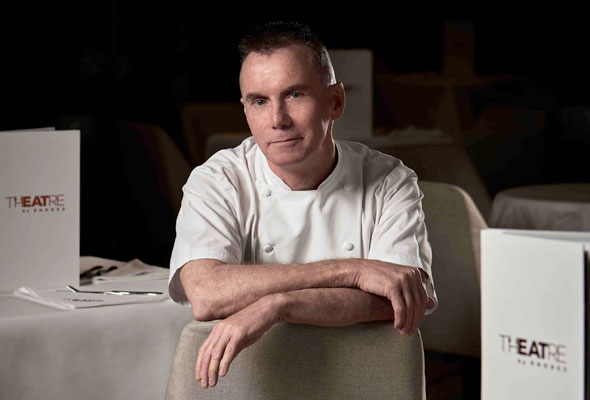 A culinary festival that has become a must-do event for the city’s residents. Taking place every November, the du Arena is overrun with celeb chefs, cookery demos, food trucks and live music. This year’s event takes place November 8 to 10 and chefs booked to appear so far include British legend Gary Rhodes. There’ll be music from former Girls Aloud star Nadine Coyle and The Bootleg Beatles. 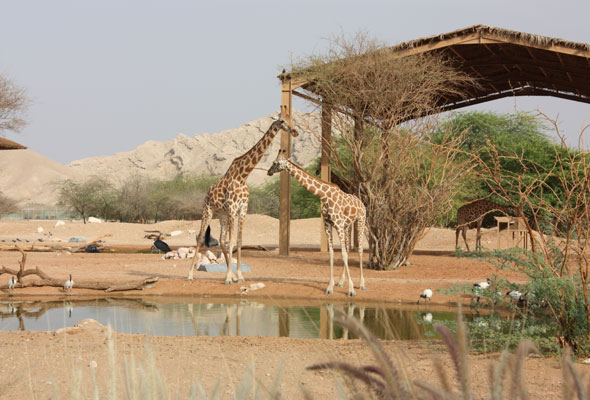 Established by Sheikh Zayed in 1968 and covering an impressive 400 hectares, Al Ain’s zoo has rebranded itself as a safari park and conservation hub in recent years. Inside you’ll find chimps, baboons, oryx, giraffes, gazelles crocodiles and a Bengal tiger, plus the world’s largest group of Arabian sand cats.

21. Admire the city skyline from a plane 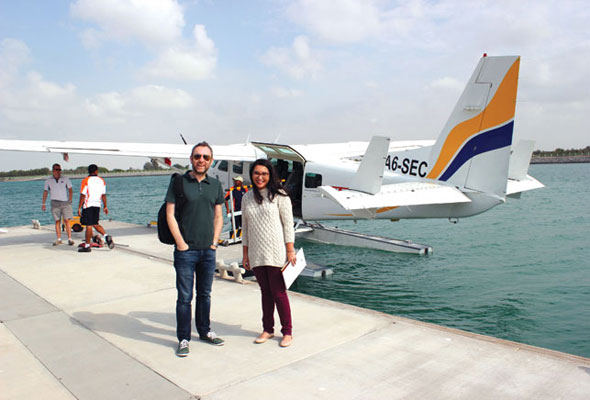 Seawings have been offering tours of the capital from their planes for several years now, with a water take-off and landing thrown in for good measure from Yas Marina. Trips usually take around 30 minutes and take in many of the city’s top landmarks including Sheikh Zayed Grand Mosque. Flights also leave from Emirates Palace. 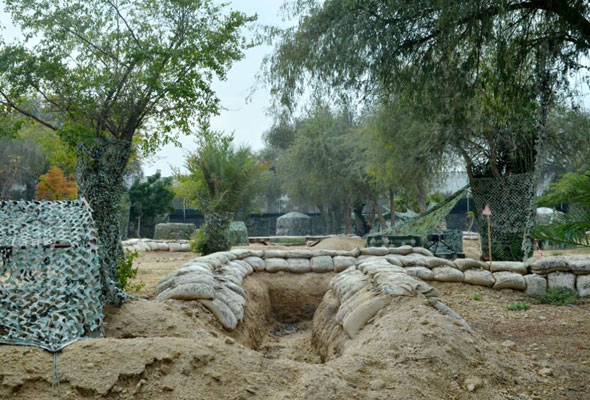 Battle Park UAE is the region’s biggest paintball and airsoft park – its themed playing fields (with names such as Zombie Wars and Castle Siege) cover a whopping half a million square feet of land in Ghantoot. 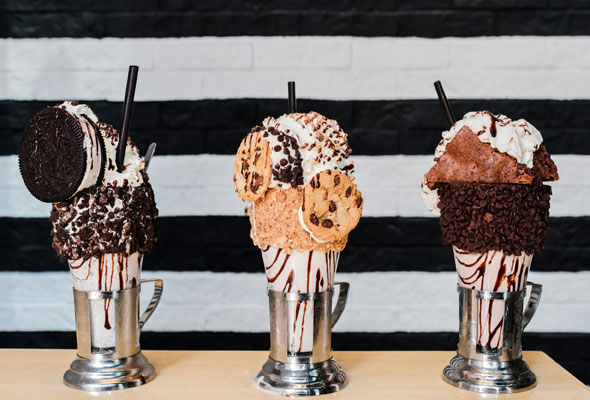 People queue for hours at the NYC branch of Black Tap to try a shake, but you’ll find no such waiting times at the Yas Mall branch. Which means more times to try one of their famous freakshake monstrosities such as the Sweet ‘N Salty, a peanut butter shake that comes with pretzel sticks, whipped cream, M&Ms stuck around the rim of the glass, and peanut butter chocolates. 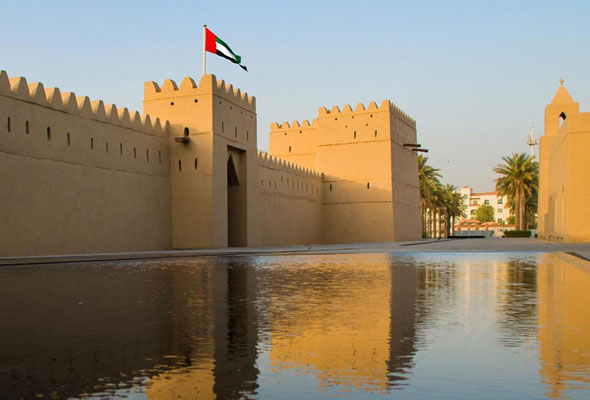 It’s the Year of Zayed, meaning it’s an appropriate time to explore Qasr Al Muwaiji. The UAE’s founding father lived here and it has now been restored and reopened as a museum and permanent exhibition. It has plenty of royal connections, too – His Highness Sheikh Khalifa bin Zayed Al Nahyan, the President of the UAE, spent a lot of his early years here. 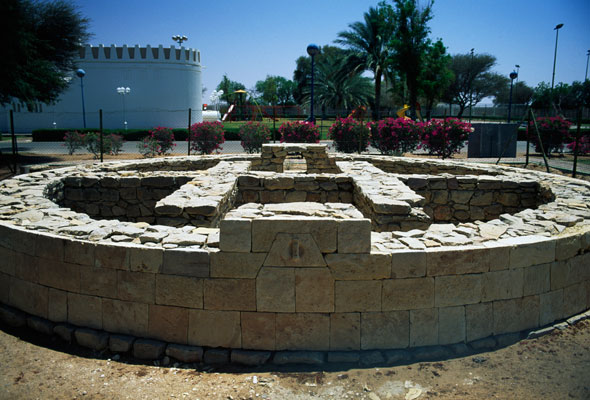 There’s several World Heritage Sites (an area of cultural, historical or scientific significance in Abu Dhabi), including the aforementioned Jebel Hafeet Tombs, plus Hili Archaeological Park, which dates back to between 2500BCE and 2000BCE. You’ll also find Bronze Age settlements, one of which shows evidence of agriculture in the UAE 5000 years ago. You can also check out artifacts from the sites at Al Ain National Museum. 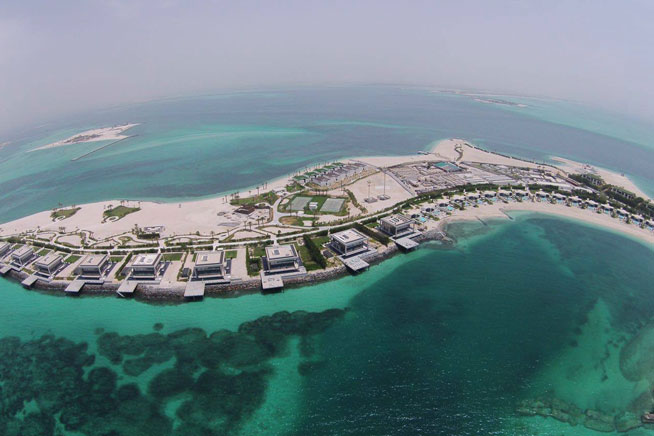 You’ll feel like you’ve escaped to a remote island in the Maldives, when you’ll actually only be a few kilometres from Saadiyat. Zaya Nurai Island is a five-star eco-resort, with a spa, six restaurants including a Mexican and a Levant seafood outlet, plus water sports such as jet skiing. If you’re looking for a romantic getaway in the capital, Zaya Nurai could be the perfect escape. 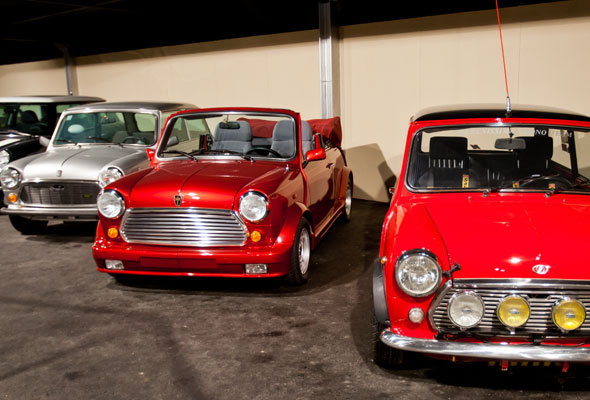 The UAE is well known for its flash cars (even the police have Lambos here) but for a truly unique take on the automobile, head to the Western Region to see the private collection of Sheikh Hamad Bin Hamdan Al Nahyan, known as the ‘Rainbow Sheikh’. The museum features more than 200 modified cars blinged to the extreme. Located south of the capital, on the road to Liwa, you can see weird and wacky creations including a Mercedes sedan with monster truck wheels, plus classic motors from the 1920s and giant jeeps (four times the size of a normal one) fitted with refrigerators. 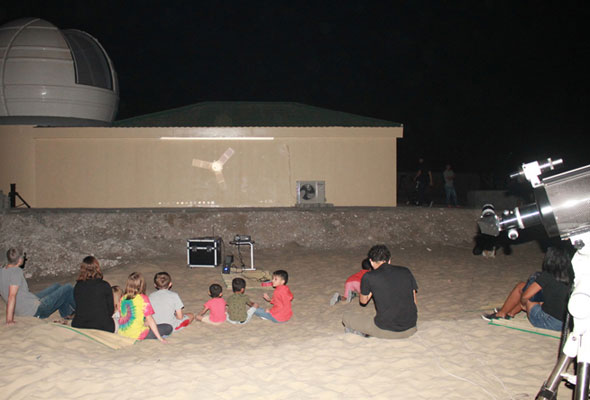 All that man-made light detracts from the beautiful stars you can see in the night’s sky in this region. But there is a way to see them at Abu Dhabi’s observatory. You’ll find it near Al Wathba’s cycle and camel racetracks (it’s on Google Maps) and it’s open three days a week to the public. Stargazers can peer at the night sky through a variety of different sized telescopes and you can also camp there – they’ll supply the tents and campfires.

29. Check out The Founder’s Memorial 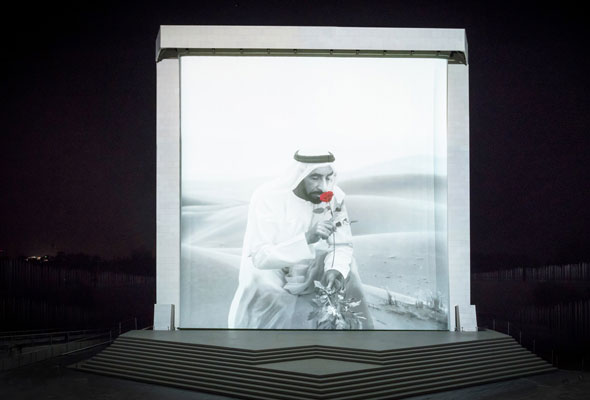 This Sheikh Zayed tribute took six years to build, and its centrepiece is a 3D silhouette of his face, known as The Constellation: it’s made of 1327 geometric shapes suspended from a 30m tall cube. 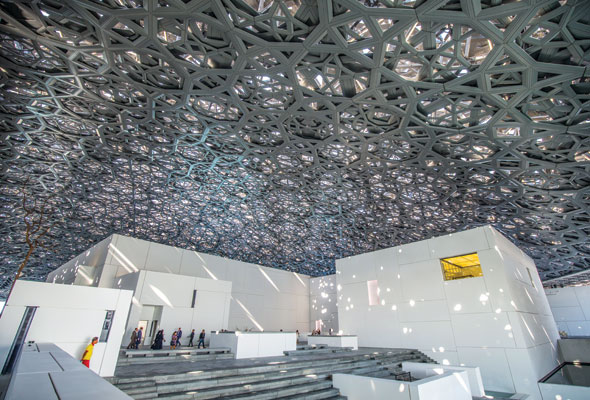 Doesn’t time fly? The capital’s iconic museum will celebrate its first birthday in November. There are so many reasons to visit, but the main one is the jaw-dropping structure designed by French architect Jean Nouvel. You can check out an exhibition of Japanese art at the cultural hub this month, too.

Things to do
EDITOR’S PICKS
Ramadan in Dubai: 38 iftars to try
READ MORE
Where can Dubai residents travel? Check out these 14 destinations
READ MORE
Rumours, facts and reveals: New Abu Dhabi bars and restaurants
READ MORE
UAE announces reduced working hours for Ramadan 2021
READ MORE
MOST POPULAR
Layali Ramadan: BIG sales on shopping, stays and dining in Abu Dhabi
A cool vegan restaurant is now open in a villa in Jumeirah
Brunch & Cake launches beautiful Ramadan-themed desserts
UAE weather: Get ready for temperatures to reach 48°C this Ramadan
Step into spring with these stunning floral restaurants
YOU SHOULD CHECK OUT
Our website uses cookies and other similar technologies to improve our site and your online experience. By continuing to use our website you consent to cookies being used. Read our privacy policy here.