BASE Dubai has announced its reopening date

Here’s the line-up for the new season…

Get excited, party animals. BASE Dubai, the open-air superclub in the Dubai Design District, will reopen its doors for the winter season on September 20, it’s been announced.

BASE burst onto the Dubai nightlife scene last year, and draws huge crowds to D3 during the cooler months. The superclub has hosted some top acts, including G-Eazy, Jason Derulo, Rita Ora.

With its state-of-the-art sound, light and pyrotechnic system, it’s almost like a mini concert venue – but with all the luxuries of a premium club. 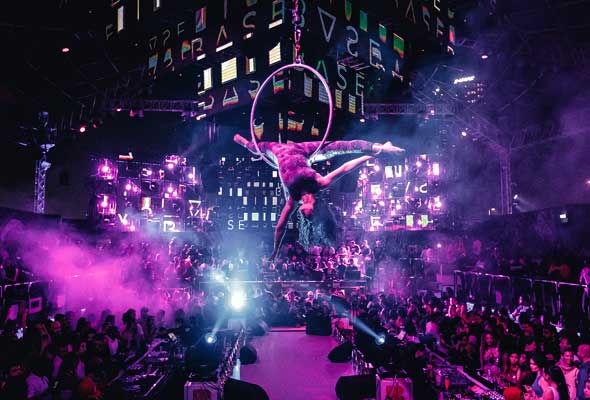 BASE will kick off the new season with an opening party launching their new Thursday event LYFE, which promises an “incomparable aural and visual experience for nights jam-packed with cutting edge entertainment, lightshows and performances”.

Each season, BASE is transformed by a new artist, and this season the club will also undergo a psychedelic facelift from Spanish street artist Demsky.

As for the line-up, well, start clearing your calendar – there are some big names. Here are all the artists set to perform between now and December…

Clubs
Nightlife
EDITOR’S PICKS
13 Sheikh Hamdan-approved restaurants in Dubai
READ MORE
Dubai brunches temporarily banned in new preventative measures
READ MORE
12 upcoming Dubai mega-projects we can't wait for
READ MORE
17 of the best beach bars in Dubai for sundowners
READ MORE
MOST POPULAR
Win gold, check out art installations and more at City Walk this Ramadan
6 fun things to do in Abu Dhabi this week: April 11 to 14
6 awesome things to do in Dubai this week: April 11 to 14
Explore Abu Dhabi's rich history at this renovated architectural gem
Here's why you have to dine at Festival Plaza during Ramadan
YOU SHOULD CHECK OUT
Our website uses cookies and other similar technologies to improve our site and your online experience. By continuing to use our website you consent to cookies being used. Read our privacy policy here.