A new interchange is now open at the Jebel Ali end of Sheikh Zayed Road in a bid to ease traffic flow in the area. 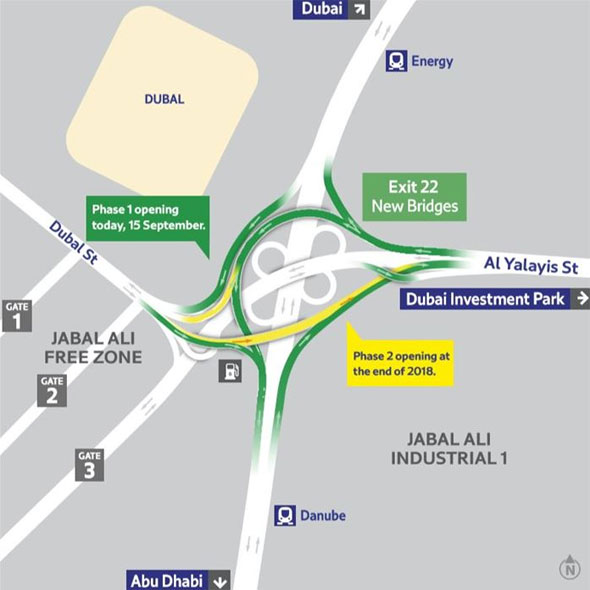 The opening of the first phase of the 7th Interchange Project will encourage drivers to take the Al Yalayes road to Sheikh Mohammed Bin Zayed Road and on to Emirates Road when coming inbound to Dubai from Jebel Ali.

The project aims to increase the capacity of Al Yalayes road to an impressive 20,000 vehicles per hour in both directions.

An additional four lane bridge branches out from Al Yalayes road, with two lanes heading to Jebel Ali Free Zone and Port, and two in the direction of Jebel Ali.

A second phase of the project will improve traffic flow from Sheikh Zayed Road to Dubal Street, and will open in the last quarter of the year.

News
Transport
EDITOR’S PICKS
When is the UAE's next public holiday?
READ MORE
Zanzibar-inspired restaurant Mikoko Hut opens at UAQ mangrove beach
READ MORE
Christmas Day in Dubai: Festive brunches, lunches, roasts and more to book
READ MORE
This magical winter garden is back at Habtoor Palace Dubai
READ MORE
MOST POPULAR
New UAE weekend explained: What we know so far...
There's Christmas parties, brunches and more at Al Jaddaf Rotana Dubai
Don't miss the year-end finale of the Festival Plaza Book Club
A new Dhs50 banknote launches in the UAE
Breaking: UAE government announces four and a half day working week
YOU SHOULD CHECK OUT
Our website uses cookies and other similar technologies to improve our site and your online experience. By continuing to use our website you consent to cookies being used. Read our privacy policy here.