Interview: David Guetta on Dubai, new music and the secret to success

Did you know the superstar DJ has a house in Dubai?

David Guetta is one of the biggest names in the industry, so when we learned he was making his much-anticipated return to Dubai this month, we were excited.

The French DJ and producer has sold more than 30 million singles worldwide, working with an array of stars including Sia, Flo Rida, Avicii, Akon and The Black Eyed Peas.

Off the back of a huge summer playing at some of Europe’s biggest festivals and clubs, the musical heavyweight dropped his seventh studio album, 7, in September. The double album, Guetta describes as an ‘album full of surprises’, and he’s not wrong. As well as pop hits where he’s collaborated with the likes of Sia and Anne Marie, there’s an underground house music side to the album, which Guetta credits to his alias, Jack Back.

Fresh from his first performance at Base Dubai on Thursday, we caught up with the music industry heavyweight to talk about his house in Dubai, how his latest album is different to the others, and what his secret to success is. 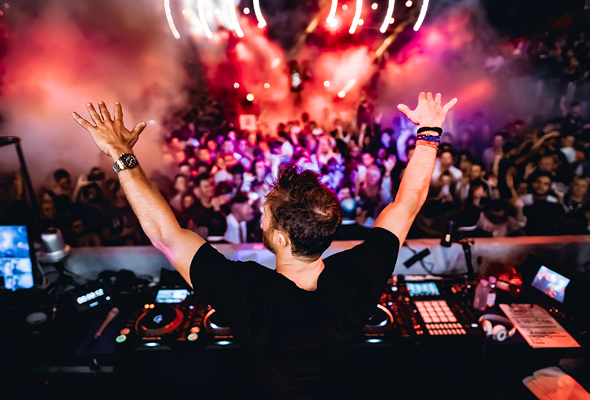 What’s On: It’s been almost two years since you last performed in the city, what is it you love about Dubai?
David Guetta: The city is amazing, there are so many great places. Dubai never stops surprising me. I like coming to Dubai to relax a little. I have a house here, so I’m a real Dubai resident. The vibe here is really nice, just chill.

WO: How did you find your first performance at Base?
DG: The gig was absolutely amazing! The club is just absolutely crazy, I had such a good time.

WO: If you have any free time on your visit, how will you be spending it?
DG: Enjoying the sun and relax a bit.

WO: How is your latest album, 7, different to your other releases?
DG: This album is special to me, because it really felt like a full circle. I had no pressure in terms of having to make hits, so I made the music that I wanted to make. That is why I also went back to my roots for the Jack Back project and it feels great! The album itself plays around with a few different genres and many collaborations with great artists. Just because I went back to my roots doesn’t mean I stopped making pop music. I just decided to do both! So, I think this is an album full of surprises.

WO: What’s still on your bucket list to do or to achieve?
DG: That’s hard to say. I’ve already done a lot of crazy stuff in my life. I just want to be happy and do what makes me feel good. Travel, have fun, make music with friends. I like living in the moment.

WO: What’s your secret to success?
DG: I think my secret to success is just doing what I love and working hard. I have been doing this for a really long time, so by now, I know my ways by now. Doing what you think is right makes you stand out from the crowd.. I think in the end it’s all about passion.