He sings, he dances, he acts, but what can Rogelio Douglas Jr bring to the stage at the legendary Quincy Jones’ Dubai lounge?

Rogelio Douglas Jr has always wanted to entertain. ‘I fell in love with show business from the age of eight, maybe even before that – I was probably five” he explains, ahead of his second show at Palazzo Versace’s Q’s bar.

The American soul singer has just arrived in Dubai for a two-month stint at intimate live music venue, Q’s, which has its stars handpicked by music legend Quincy Jones.

In the entertainment business, Douglas falls into the rare category known as a ‘triple threat’: he sings, he dances he acts. But more than that, Rogelio Douglas Jr is a performer.

His sets are versatile, and at his Dubai gig he suitably opens with his own track ‘Welcome To The Show’, before launching into an energetic set of fail-safe soul hits including ‘Stand By Me’ and ‘Can’t Take My Eyes Off You’. Though safe his sets are not: he reels off an up-tempo version of John Legend’s ‘All Of Me’ with energy and ease, and follows it with a soulful performance of ‘Black & Gold’, and later in the performance also performs Marc Anthony’s Vivir mi Vida’ . The Latin song, performed in Spanish, is a track that everyone should listen to at least once in their lifetime.

So if it’s a static performance you’re expecting from the star, who has arrived off the back of a residency in LA, you can think again. “I always strongly encourage people to let their gut out with me and have a wonderful time. I encourage moving, clicking, clapping. I hope to have everyone on their feet in Dubai”. 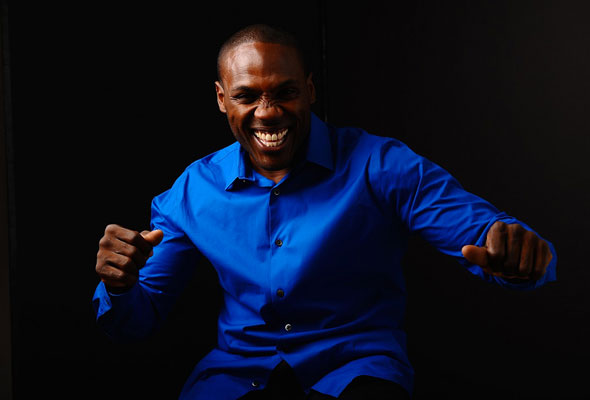 Douglas attended the esteemed LaGuardia High School of Performing Arts in New York, before moving on to study with the New York City Opera, and his CV indeed reads like that of a triple threat. He was part of the Tony-award winning version of Hamilton on Broadway, has appeared in series including Orange Is The New Black and Empire, and describes performing the Spanish version of ‘Where Is The Love?’ alongside The Black Eyed Peas as one of his most ‘wow-worthy moments’.

But when he’s not performing, the soul star has already planned his Dubai bucket list. “I want to see the tallest buildings, I want to go sky diving, I want to go paddle boarding, I want to experience all the culture Dubai has to offer”.