The population of Dubai has now surpassed 3 million

70 per cent of the population is male…

The statistics from Dubai Statistics Center (DSC) indicate that Dubai’s resident population now sits at 3,136,400, while the ‘total active daytime’ population of the emirate is 4,291,400. This figure takes into account non-resident workers and temporary Dubai residents, such as those here for leisure and on holiday. 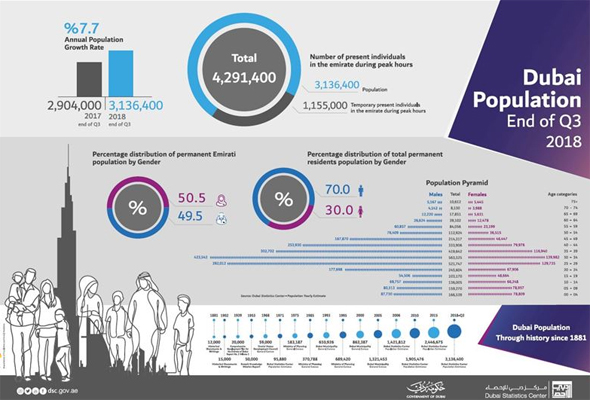 According to the DSC, the number of temporary residents in Dubai in the third quarter of 2018 is up by 6.6 per cent compared to the same period in 2017, while the resident population has increased by 1.1 per cent, totaling a growth of 7.7 per cent across the board.

But what about the gender split? Interestingly, 70 per cent of residents are male, while 30 per cent are female. It works out to around 233 males to every 100 females.

Why? Well, the DMC cites the fact that a majority of expatriate workers are males who live in Dubai without their families as the central reason.

The stats also show that more than half a million residents are between 30 and 34 years of age, while the 20 to 44 age bracket accounts for almost 67 per cent of the resident population.

Dubai’s population has seen a huge increase over the years, with the population in 1881 recorded at just 12,000 people. That’s a growth of 261 times over the last 137 years.