Where to find the best pizza in Abu Dhabi

There’s nothing better than sinking your teeth into a delicious, cheesy slice of pizza. So we’ve scouted out Abu Dhabi’s very best – from luxury truffle-topped pies to more calorific creations…

Emirates Palace is a regal location to eat any kind of meal, so it’ll come as no surprise that the city’s most expensive pie can be found here, at Italian outlet Mezzaluna. Their seafood pizza costs a whopping Dhs145 and is made with pesto, jumbo prawns, scallops and Tropea red onions – a famous veg grown on clay cliffs on Mount Poro, in the southern Italian town of Tropea. It’s claimed the onion has healing properties and can help reduce the symptoms of 30 ailments, including colds and flu. 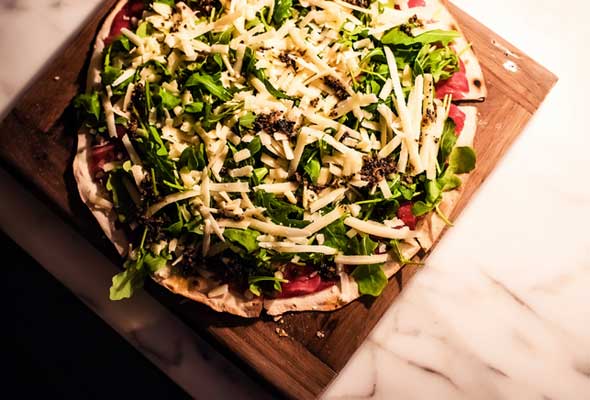 Another pizza with truffles, this high-end Italian at The Galleria imports its ingredients from Italy, and its signature dish features truffle carpaccio and sliced beef carpaccio, along with Parmesan cheese. 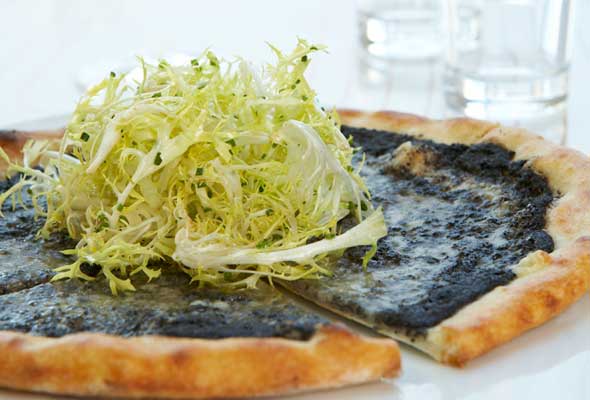 Have you ever eaten Fontina cheese? It’s Italian and while you can eat it at any time of year, it’s recommended you buy it during summer – this is because the cows that produce it are moved to an altitude of 700m (up from 550m), and this high and mighty position, along with a diet of rich grass, is what gives the cheese its buttery, nutty flavour. It’s combined with black truffle, one of the most expensive edible mushrooms in the world, for a truly decadent dish.

Wagyu 65 at District By Amalfi 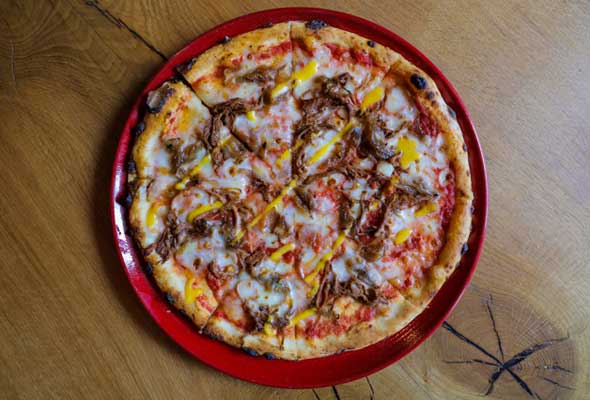 A new pizza at a new restaurant – District By Amalfi opened last month in the capital (an Italian inspired by the urban landscape of New York City) and its menu highlight is the Wagyu 65. It’s made with marinated Wagyu brisket, caramelised onions and béarnaise sauce and the beef is brined and then slow cooked in a sous vide for 14 hours to make it extra soft. 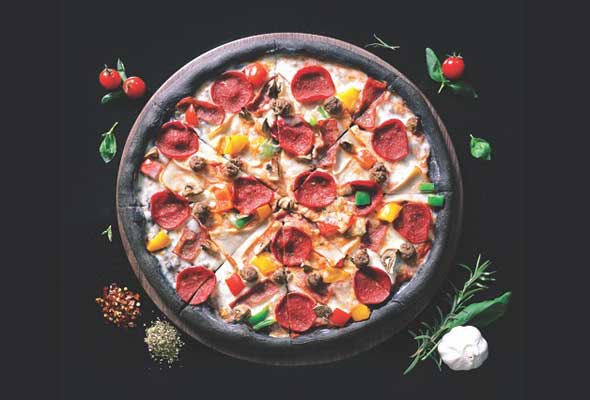 Waterlemon is a neat café situated in Al Bateen’s Marina area and their menu features black bread rolls and a black-base pizza, which is made from ground roasted root vegetables and comes with rocket and pepperoni slices. 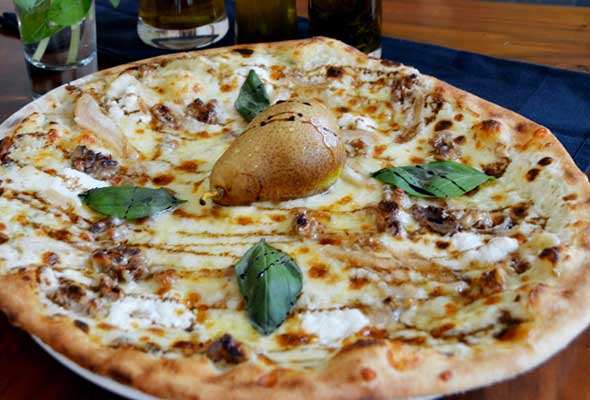 Ingredients such as walnuts, chestnuts, honey and pear make this sound like a bowl of muesli, not a pizza, but all the ingredients are combined with mozzarella and Parmesan cheese for a slightly sweet dish. 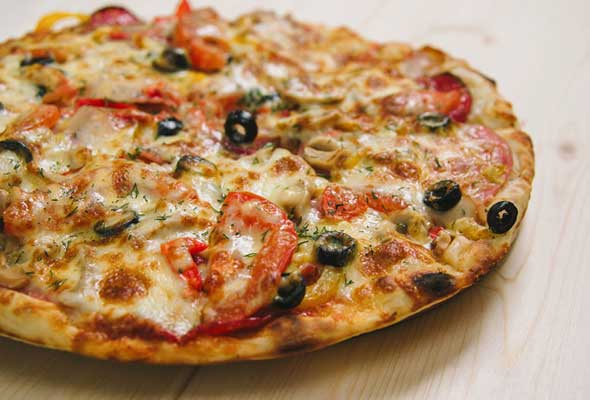 We’ve had lamb in stews and grilled, but in a pizza? You can try it minced in the Contadina, along with onions, olives, bell peppers and mozzarella. 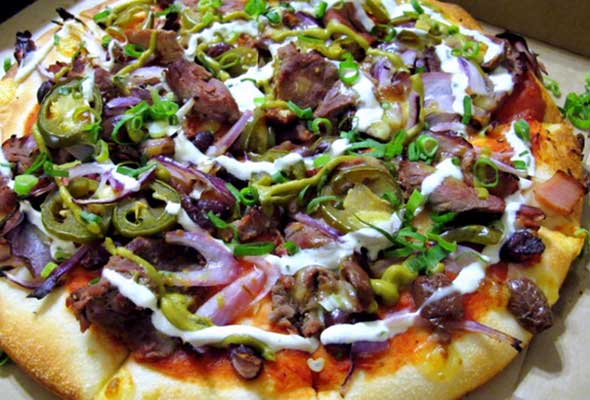 If you’ve ever fancied Mexican but then had a last-minute change of mind and opted for pizza, the Golfo could be your perfect dining partner. It’s covered with salsa, beef strips, jalapenos, olives, guacamole and sour cream for real Tex appeal. 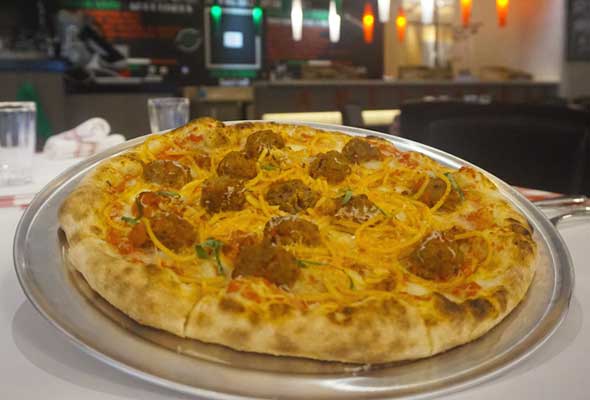 One of the capital’s newest Italians is Dino’s and the restaurant features a couple of unique pizzas on its menu, including this carb heavy Pizza Americana that is served with spaghetti plus beef meatballs and Parmesan cheese. 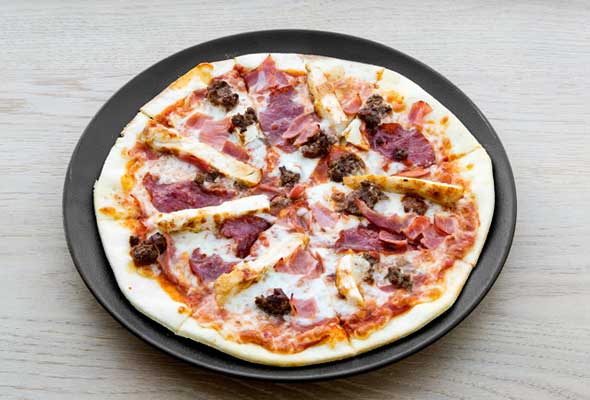 An Emirati-owned outlet, Tawa is also a former What’s On Awards winner that does a great line in gluten-free bread. And it’s put to good use on their range of pizzas – there are four available, including the Meat Lovers, which comes with chicken, minced Wagyu, pepperoni and smoked turkey. 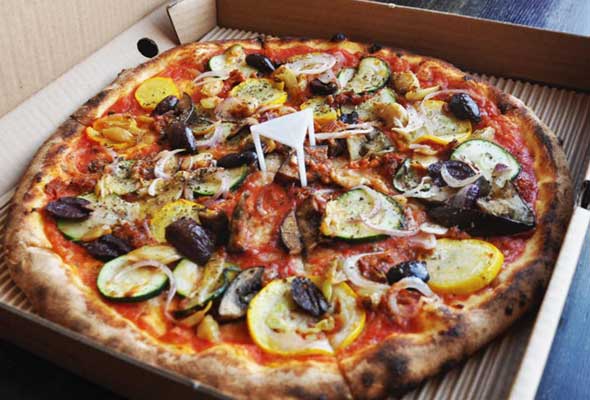 You’ll find not one, but five vegan pizzas on the menu at Di Rocco, including the Ortolana, which comes with aubergine, courgette, onion and pesto. You can get four vegan starters here as well, including baked vegan mozzarella halves. 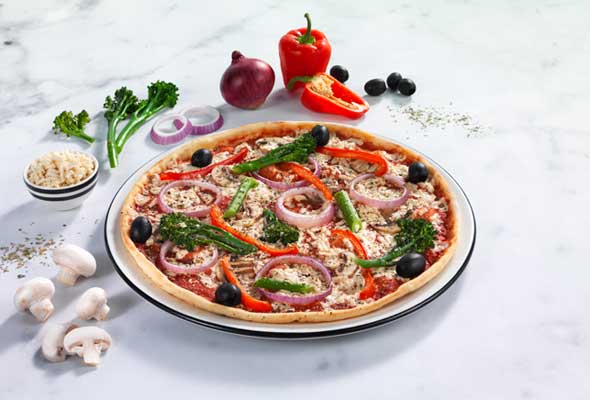 Vegan cheese makes another appearance at Pizza Express, which recently introduced an animal-free dish to its menu. The Giardiniera comes overloaded with veggies including broccoli, mushrooms, red peppers, onions and olives, plus a vegan mozzarella.

Kale and mushroom at Sacci 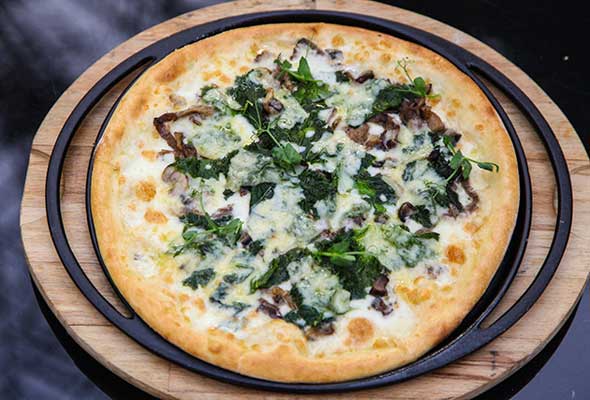 The aforementioned Fontina cheese makes another appearance at Sacci, along with the most hipster of ingredients, kale (it’s not just for salads and blending in protein shakes). Kale is packed full of vitamins, magnesium, fibre and has zero fat – in fact, a cup of kale only has 36 calories. Sacci also serves a leek and potato pizza, for those of you in the market for some extra carbs. 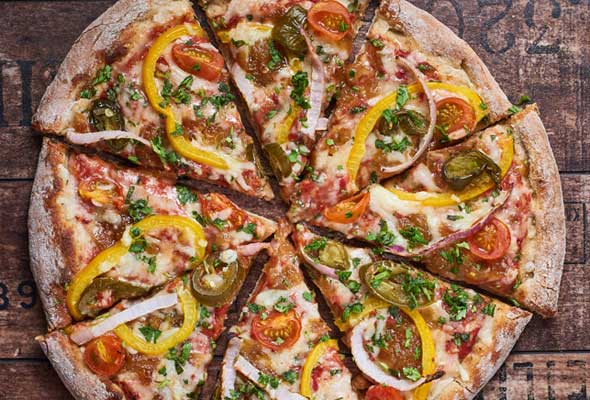 UAE chain Freedom Pizza are just one of several to now offer vegan pizzas – the dairy is replaced with a vegan cheese. The Free-gan is otherwise a straightforward affair, with cherry tomatoes, onions, jalapenos and peppers. Freedom also offer gluten-free bases, although these aren’t vegan. 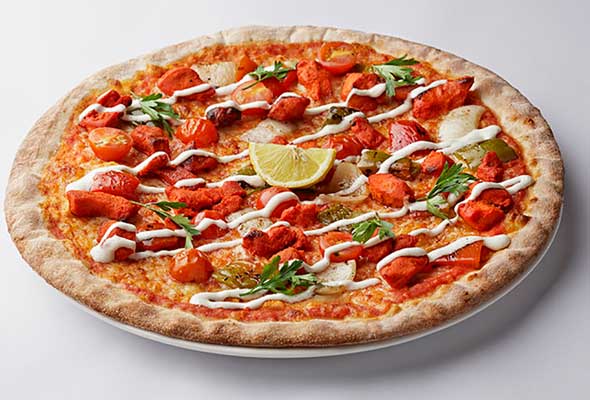 The classic Middle Eastern snack can also be found on a pizza base in the capital – it naturally comes with garlic sauce for extra authenticity.

The What’s On Award-winning outlet embraces the spirit of the UAE with the Beduino, a pizza that comes with zaatar, halloumi and chicken. 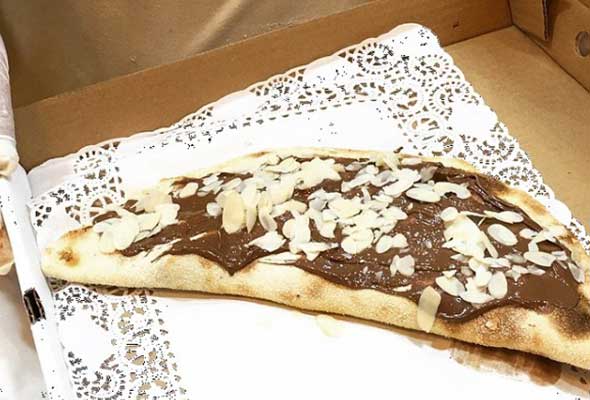 This stand-alone restaurant also has a Nutella pizza with banana, but we recommend you check out their cinnamon offering for a sort of palate cleanser. It’s served with a portion of fresh cream. 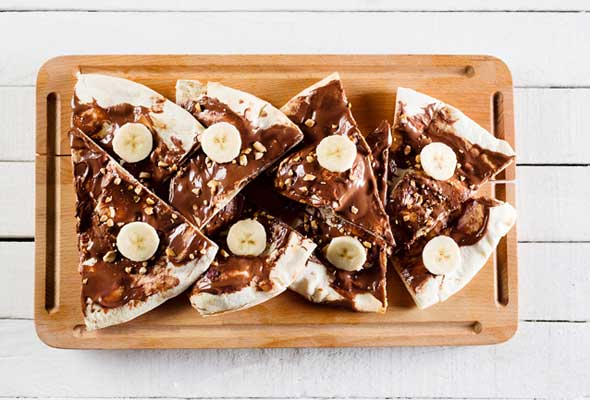 The UAE is obsessed with Nutella, so it’s not surprising to find it in a pizza dish – this one comes with vanilla ice cream and serves two people.

ONE TO TRY: The metre-long at Spaccanapoli 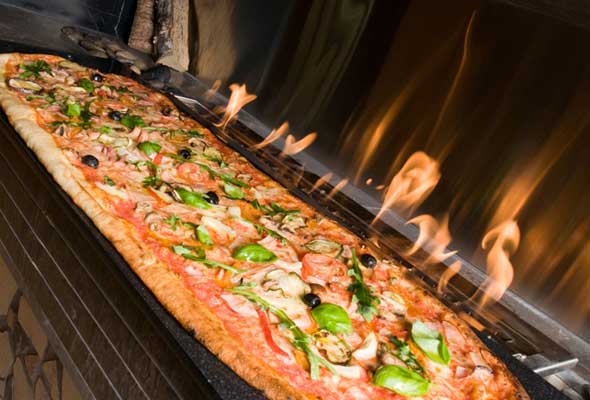 The Italian outlet was the first in the city to sell the metre-long pizza – it’s so long it takes up most of the back seat of a saloon car. It can feed up to four people and the price is dependent on your choice of toppings.

Eat & Drink
Restaurants
EDITOR’S PICKS
Ain Dubai will open with fireworks, live music and a drone show
READ MORE
Incredible Aura SkyPool to open in Palm Tower this November
READ MORE
Brit Grand Slam hero Emma Raducanu confirmed for Mubadala Tennis
READ MORE
What’s On Nightlife Awards 2021: Here are the nominees...
READ MORE
MOST POPULAR
Rag’n’Bone Man is coming to Dubai in November
Coffee and cars combine at this unique new Dubai cafe
12 of the best places for glamping in the UAE
Emma Raducanu sends a message to her UAE fans
Parisian celebrity hotspot Caviar Kaspia has opened in Dubai
YOU SHOULD CHECK OUT
Our website uses cookies and other similar technologies to improve our site and your online experience. By continuing to use our website you consent to cookies being used. Read our privacy policy here.