Is the world’s highest Georgian restaurant a case of style over substance?

Going out for Georgian food isn’t a sentence What’s On has uttered too many time in the past, given Georgian cuisine isn’t well represented in Dubai. However, this is set to change with the opening of Modi, the brainchild of Georgian celebrity chef Guram Bagh. Located on the 31st floor at Sofitel Downtown, previously the home of Player Sports Bar, the owners claim this is the highest Georgian restaurant in the world.

The dimly lit restaurant is split into a restaurant and a stage area for performances (more on that later), with the latter showcasing mannequins with traditional Georgian dress. The waiters are similarly dressed, giving the restaurant a slightly prop shop, theatrical feel. As well as traditional music, there’s Georgian art dotted around the restaurant which we’re told will rotate every three months.

ALSO READ: 3 fresh food spots to dine at in Dubai this weekend

Modi serves traditional Georgian cuisine and wine, flown directly from Georgia twice a week. We kicked off with starterebis krebuli, an assortment of starters (Dhs100) including fried eggplants with walnuts, and vegetable ragu with Georgian greens and herbs. Each one was fresh and nicely presented on wooden pots. This was followed by tsitsila tkemalshi, chicken with sour plum sauce (Dhs85), which, although a starter, was big enough to have been a main. Our choice was a table wide hit; the sweet plum sauce and meat worked very well together. 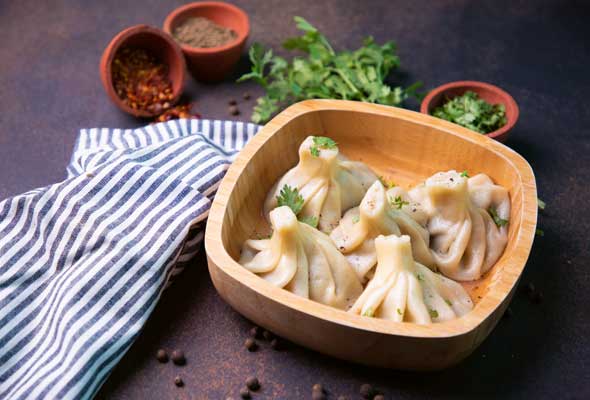 It’s not just food here that takes centre stage – a pair seated opposite spontaneously burst into song and take to the stage, performing traditional live folk music. And the staff here are not your typical waiters either – they moonlight as professional international dancers who throughout the evening burst into rapturous dance.

For mains, the chanakhi (Dhs120) lamb stew served in a clays pot was the highlight of the evening. It warmed us up and reminded us of a hearty stew you’d have on a cold winter’s day. The Josper charcoal grilled Georgian chicken piri-piri with roasted spicy potatoes and chilly mayo (Dhs100) was packed with flavour.

For dessert, although the matsoni, Georgian fermented milk product with walnut jam (Dhs60) was tasty, the churchxela traditional Georgian sweets, grape juice with nuts (Dhs60) were too filling after several generous courses and were mostly left untouched.

Modi stands apart from many of the city’s glitzy restaurants – its focus is more substance over style. The staff were attentive without being overbearing and keen to recommend traditional Georgian food and wine pairings. Thanks to its great service and authentic, hearty fare, it’s certainly worth checking out, if only to sample a new cuisine.

Eat & Drink
Restaurants
EDITOR’S PICKS
When is the UAE's next public holiday?
READ MORE
Zanzibar-inspired restaurant Mikoko Hut opens at UAQ mangrove beach
READ MORE
Christmas Day in Dubai: Festive brunches, lunches, roasts and more to book
READ MORE
This magical winter garden is back at Habtoor Palace Dubai
READ MORE
MOST POPULAR
New UAE weekend explained: What we know so far...
There's Christmas parties, brunches and more at Al Jaddaf Rotana Dubai
Don't miss the year-end finale of the Festival Plaza Book Club
A new Dhs50 banknote launches in the UAE
Breaking: UAE government announces four and a half day working week
YOU SHOULD CHECK OUT
Our website uses cookies and other similar technologies to improve our site and your online experience. By continuing to use our website you consent to cookies being used. Read our privacy policy here.