The Dubai ruler paid a visit to a new chocolatier, while DIFC’s latest Greek restaurant got the royal seal of approval from Sheikh Hamdan…

HH Sheikh Mohammed Bin Rashid Al Maktoum Vice President of the UAE and Ruler of Dubai is no stranger to Dubai’s restaurant scene. The Dubai ruler is often spotted dining around the city from City Walk cafe’s to local Emirati eats in Souk Al Bahar.

But his latest visit is to The Dubai Mall – and it’s luxury chocolatier – Maison Pierre Marcolini.

Founded in 1995 by celebrated Belgian chocolatier, Pierre Marcolini, it’s become one of the world’s most famous chocolate shops, having opened its first Middle Eastern store only a few weeks ago. 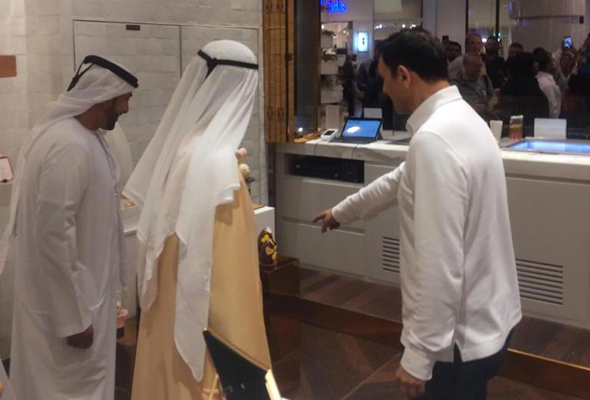 Although we’re not sure what Sheikh Mohammed was browsing for when he paid the store a visit on Tuesday February 19, he was seen speaking to staff and touring an array of products at the vast new chocolatier.

And he wasn’t the only royal spotted out and about in the city on Tuesday.

Having only just opened on Sunday February 17, the team at Avli by Tashas said the were ‘honoured’ to have been visited by Dubai’s Crown Prince, as they took to Instagram to share a picture of Sheikh Hamdan with Natasha Sideris, the restauranteur behind the new concept.

Avli by Tashas is the second licensed concept from Natasha Sideris, the founder of popular cafe chain, tashas.

Inspired by Natasha’s Greek heritage, avli is described as reminiscent of modern Athenian culture and promises a ‘sophisticated yet laid-back space’ that’s set to transport guests straight back to the Med.

News
Royals
EDITOR’S PICKS
What’s On Nightlife Awards 2021: Here are the nominees...
READ MORE
It's back! What's On Lock In returns to Media One Hotel
READ MORE
Arts and culture: 5 spots we can't wait to visit at Expo 2020 Dubai
READ MORE
UAE petrol prices are set to decrease in September 2021
READ MORE
MOST POPULAR
Abu Dhabi: Wristband no longer required for most home quarantine
As of September 19, PCR test not required to enter Abu Dhabi from UAE
This new family-friendly brunch includes free cinema tickets
Pics of the week: Your best photos of the UAE
How to use Playkey.me, the region's first supercharged cloud gaming service
YOU SHOULD CHECK OUT
Our website uses cookies and other similar technologies to improve our site and your online experience. By continuing to use our website you consent to cookies being used. Read our privacy policy here.