What’s On travels to Barcelona

This month, we head to the cosmopolitan capital of Spain. From the best things to do, where to stay and more importantly, where to eat. We bring you the ultimate guide to Barcelona. 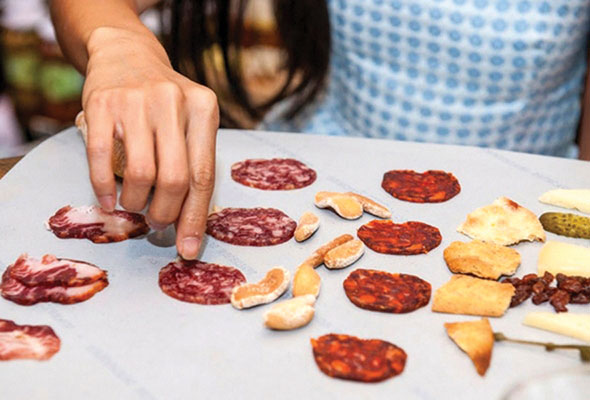 If the way to your heart is through your stomach, then you’ll definitely fall in love with Barcelona on a food tour with local company Devour Barcelona. The Tastes & Traditions food tour is a great way to get acquainted with the city, covering two character-filled neighbourhoods – El Born and La Barceloneta. Over the course of four hours, you’ll be taken through bustling markets, speciality food shops, and hole-in-the-wall restaurants that would be impossible to find on your own. Guides are passionate and knowledgeable, and tour groups are kept small for a more intimate experience. Tours cost Dhs330, which includes more than enough tastings of cheese, cured meats, paella and tapas to keep you full for the rest of the day.

Can’t get enough of Gaudí? This stunning public park and UNESCO World Heritage Site is another of the architect’s famous works, featuring winding paths, colourful mosaics, and buildings that resemble the gingerbread house from Hansel and Gretel. Park Guell also has a house where Gaudí himself lived at one stage, which has been converted into a museum. While you can wander around most of the park for free, you’ll need a ticket to see all the best stuff in the section known as the “monumental core”. Entrance costs Dhs31 when purchased online. 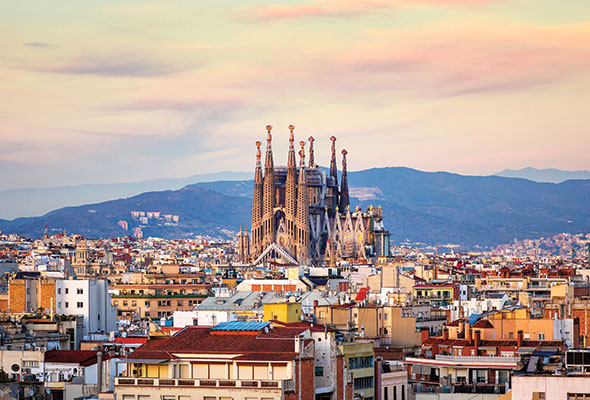 Arguably the world’s most famous unfinished building, Sagrada Familia is considered the best example of modernist architecture designed by Gaudí, and is the main icon of Barcelona. Work on the church first began in 1882, and when Gaudí died in 1926, only a quarter of his masterpiece was finished. The building is scheduled for completion in 2026 – the centenary of Gaudí’s death. As Sagrada Familia is Barcelona’s most visited attraction, you’ll need to plan ahead. Tickets are available for purchase for 15 euros via the official website, with fixed entry times. Alternatively, you can attend mass at 9am on a Sunday morning – entrance is on a first come, first served basis. 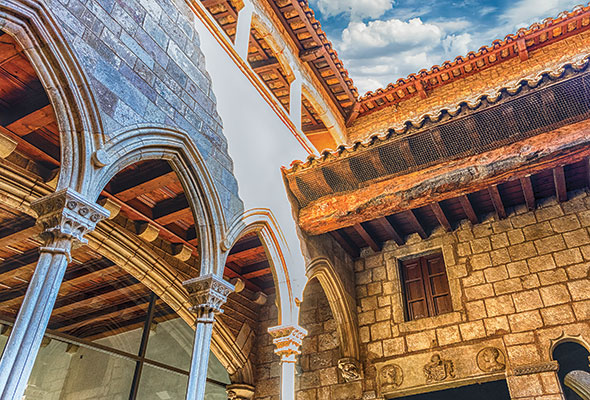 Though his most iconic work, Guernica, lives in Madrid, this fascinating museum still houses one of the world’s most extensive collections of artworks by 20th century Spanish artist Pablo Picasso. While Picasso was born in the southern city of Malaga, and spent much of his life in France, the artist spent his formative creative years in Barcelona, and the museum explores his connection with the city. Most of the paintings are from the artist’s early years, so if you’re already familiar with his more famous works, this museum will give you a deeper insight. Entrance costs 12 euros, and the museum is closed Mondays.

Passeig de Gracia is to Barcelona what Fifth Avenue is to New York: a shopping heaven. You’ll find some of the world’s top designer brands along this famous boulevard, as well as plenty of homegrown heroes – don’t leave without visiting the jaw-dropping flagship store of Spanish fashion empire Zara (you’ll find prices are significantly cheaper compared to their UAE stores). If you can tear your eyes away from the temptations of the shop windows, be sure to look up and admire the buildings – Passeig de Gracia is home to some of main Barcelona’s architectural gems, including two buildings by the celebrated Catalan architect Antoni Gaudí. 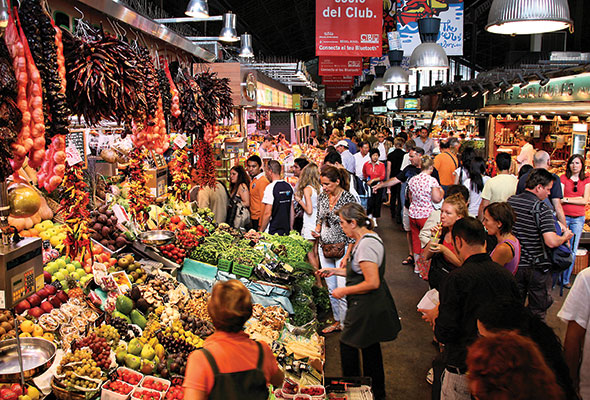 Get lost in a dizzying labyrinth of stalls and eateries selling everything from handmade chocolates and candies to fresh fish and offal. Top tip – the deeper into the market you venture, the less touristy it gets. 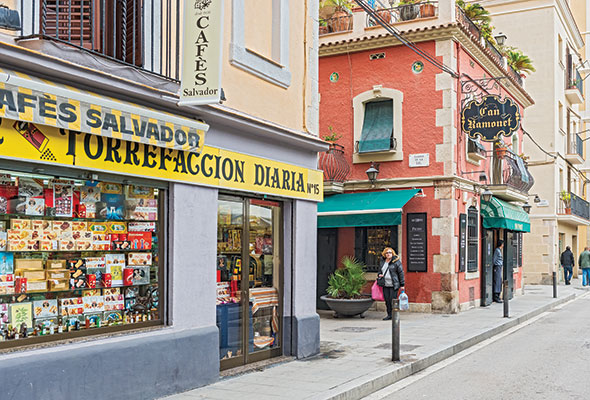 A cosy little tavern that serves up some of the best seafood paella. The waiters make a big show of presenting it to you in the pan first so you can “quality check” (read: making sure there are enough prawns). 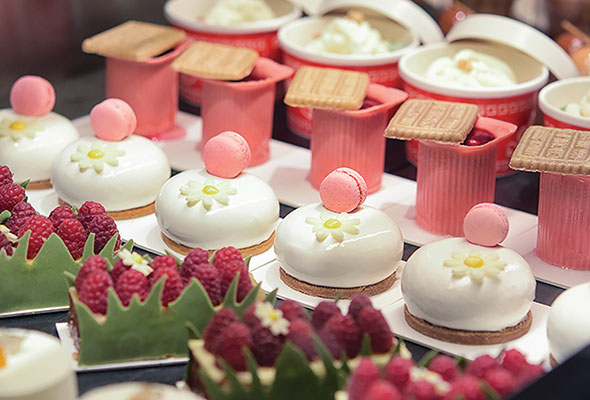 The El Born quarter is home to this tiny bakery, which churns out exquisite pastries. Head here for its legendary mascarpone croissants. There’s no seating, but you’ll polish it off before you sit down anyway. 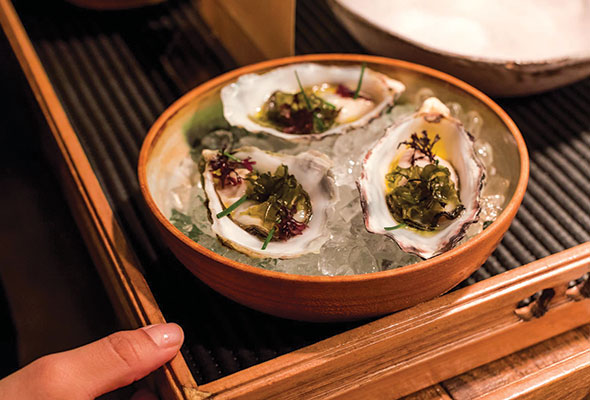 If you want to experience Barcelona’s tapas culture in serious style, you should do so at this playful Michelin-starred spot. Often compared to Willy Wonka’s factory, it specialises in small dishes presented with creative flair.

ALSO READ: 10 interesting destinations within a four-hour flight of Dubai 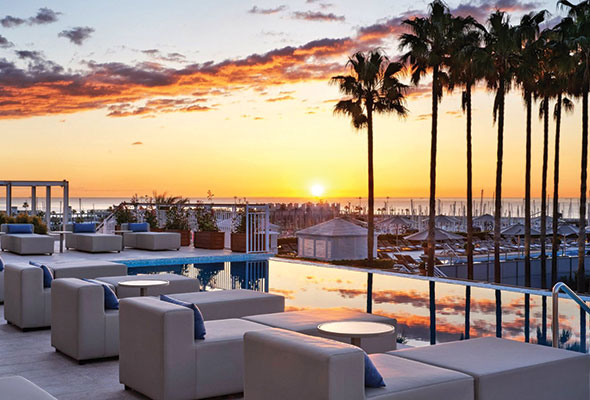 One of Barcelona’s tallest buildings at 44 storeys, this striking hotel is perched right on the beachfront, overlooking the Mediterranean Sea. 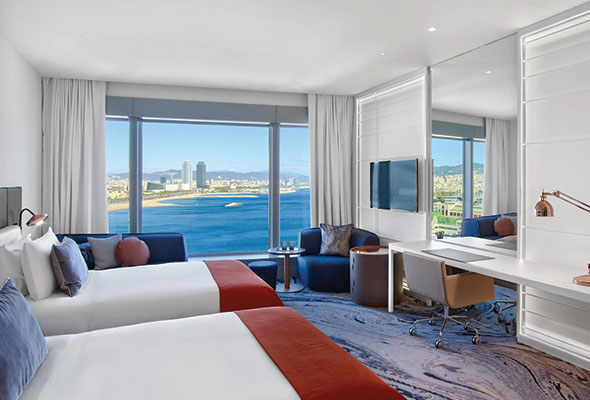 This hotel was designed by Spanish architect Ricardo Bofill, who appears to have taken more than a little inspiration from the Burj Al Arab. 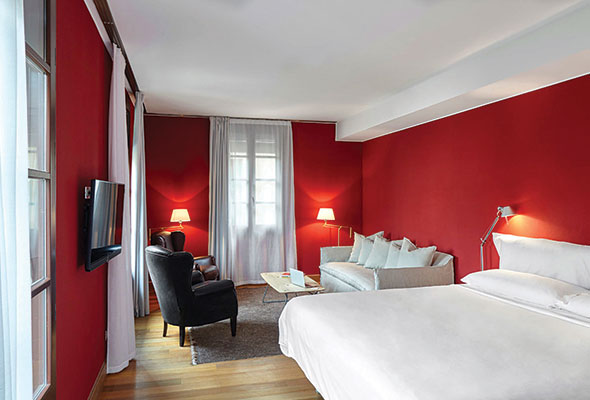 Things you should know: 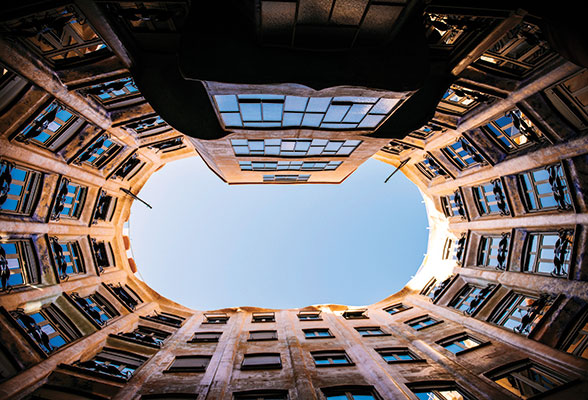 Barcelona is the capital of Catalonia, which is such a distinct region that many people who live here consider it a separate nation from the rest of Spain. The region has its own language, celebrates its own holidays, and you’ll find differences in the food, too.

Etihad recently launched direct flights from Abu Dhabi to Barcelona. The service will initially be operated five times a week, before becoming a daily operation from the end of March. Prices start from Dhs3,143 return.

Travel
Travel Guides
EDITOR’S PICKS
Ain Dubai will open with fireworks, live music and a drone show
READ MORE
Incredible Aura SkyPool to open in Palm Tower this November
READ MORE
Brit Grand Slam hero Emma Raducanu confirmed for Mubadala Tennis
READ MORE
What’s On Nightlife Awards 2021: Here are the nominees...
READ MORE
MOST POPULAR
The most up to date information for entering Abu Dhabi: Oct 2021
First look: Instagram breaking 2D cafe, Forever Rose opens in Yas Mall
Emirates warns passengers to arrive early to DXB airport this weekend
Pics of the week: Your best photos of the UAE
Take a look inside the brand new Madame Tussauds Dubai
YOU SHOULD CHECK OUT
Our website uses cookies and other similar technologies to improve our site and your online experience. By continuing to use our website you consent to cookies being used. Read our privacy policy here.